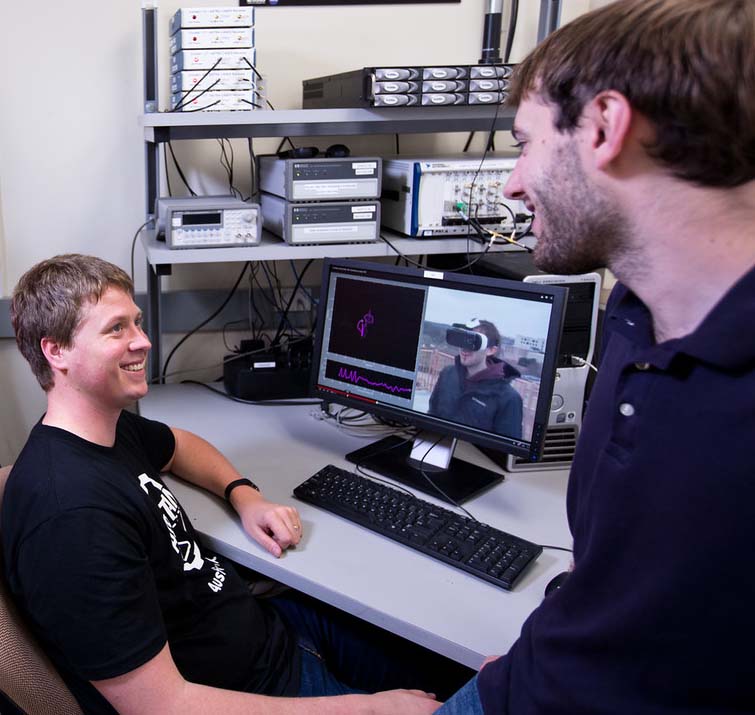 AUSTIN, Texas — Researchers in the Cockrell School of Engineering at The University of Texas at Austin have developed a centimeter-accurate GPS-based positioning system that could revolutionize geolocation on virtual reality headsets, cellphones and other technologies, making global positioning and orientation far more precise than what is currently available on a mobile device.

The researchers’ new system could allow unmanned aerial vehicles to deliver packages to a specific spot on a consumer’s back porch, enable collision avoidance technologies on cars and allow virtual reality (VR) headsets to be used outdoors. The researchers’ new centimeter-accurate GPS coupled with a smartphone camera could be used to quickly build a globally referenced 3-D map of one’s surroundings that would greatly expand the radius of a VR game. Currently, VR does not use GPS, which limits its use to indoors and usually a two- to three-foot radius.

“Imagine games where, rather than sit in front of a monitor and play, you are in your backyard actually running around with other players,” said Todd Humphreys, assistant professor in the Department of Aerospace Engineering and Engineering Mechanics and lead researcher. “To be able to do this type of outdoor, multiplayer virtual reality game, you need highly accurate position and orientation that is tied to a global reference frame.”

Humphreys and his team in the Radionavigation Lab have built a low-cost system that reduces location errors from the size of a large car to the size of a nickel — a more than 100 times increase in accuracy. Humphreys collaborated with Professor Robert W. Heath from the Department of Electrical and Computer Engineering and graduate students on the new technology, which they describe in a recent issue of GPS World.

Centimeter-accurate positioning systems are already used in geology, surveying and mapping, but the survey-grade antennas these systems employ are too large and costly for use in mobile devices. The breakthrough by Humphreys and his team is a powerful and sensitive software-defined GPS receiver that can extract centimeter accuracies from the inexpensive antennas found in mobile devices — such precise measurements were not previously possible. The researchers anticipate that their software’s ability to leverage low-cost antennas will reduce the overall cost of centimeter accuracy, making it economically feasible for mobile devices.

Humphreys and his team have spent six years building a specialized receiver, called GRID, to extract so-called carrier phase measurements from low-cost antennas. GRID currently operates outside the phone, but it will eventually run on the phone’s internal processor.

To further develop this technology, Humphreys and his students recently co-founded a startup, called Radiosense. Humphreys and his team are working with Samsung to develop a snap-on accessory that will tell smartphones, tablets and virtual reality headsets their precise position and orientation.

The researchers designed their system to deliver precise position and orientation information — how one’s head rotates or tilts — to less than one degree of measurement accuracy. This level of accuracy could enhance VR environments that are based on real-world settings, as well as improve other applications, including visualization and 3-D mapping.

Additionally, the researchers believe their technology could make a significant difference in people’s daily lives, including transportation, where centimeter-accurate GPS could lead to better vehicle-to-vehicle communication technology.

“If your car knows in real time the precise position and velocity of an approaching car that is blocked from view by other traffic, your car can plan ahead to avoid a collision,” Humphreys said.

The University of Texas at Austin is committed to transparency and disclosure of all potential conflicts of interest. All UT investigators involved with this research have filed their required financial disclosure forms with the university. Todd Humphreys and three of his graduate students — Andrew Kerns, Daniel Shepard and Kenneth Mark Pesyna Jr.— own equity positions in Radiosense LLC, a company they created to market high-precision, low-cost GPS positioning. The company is based on technology created in Humphreys’ lab that Radiosense is licensing from UT, working with the university’s Office of Technology Commercialization.