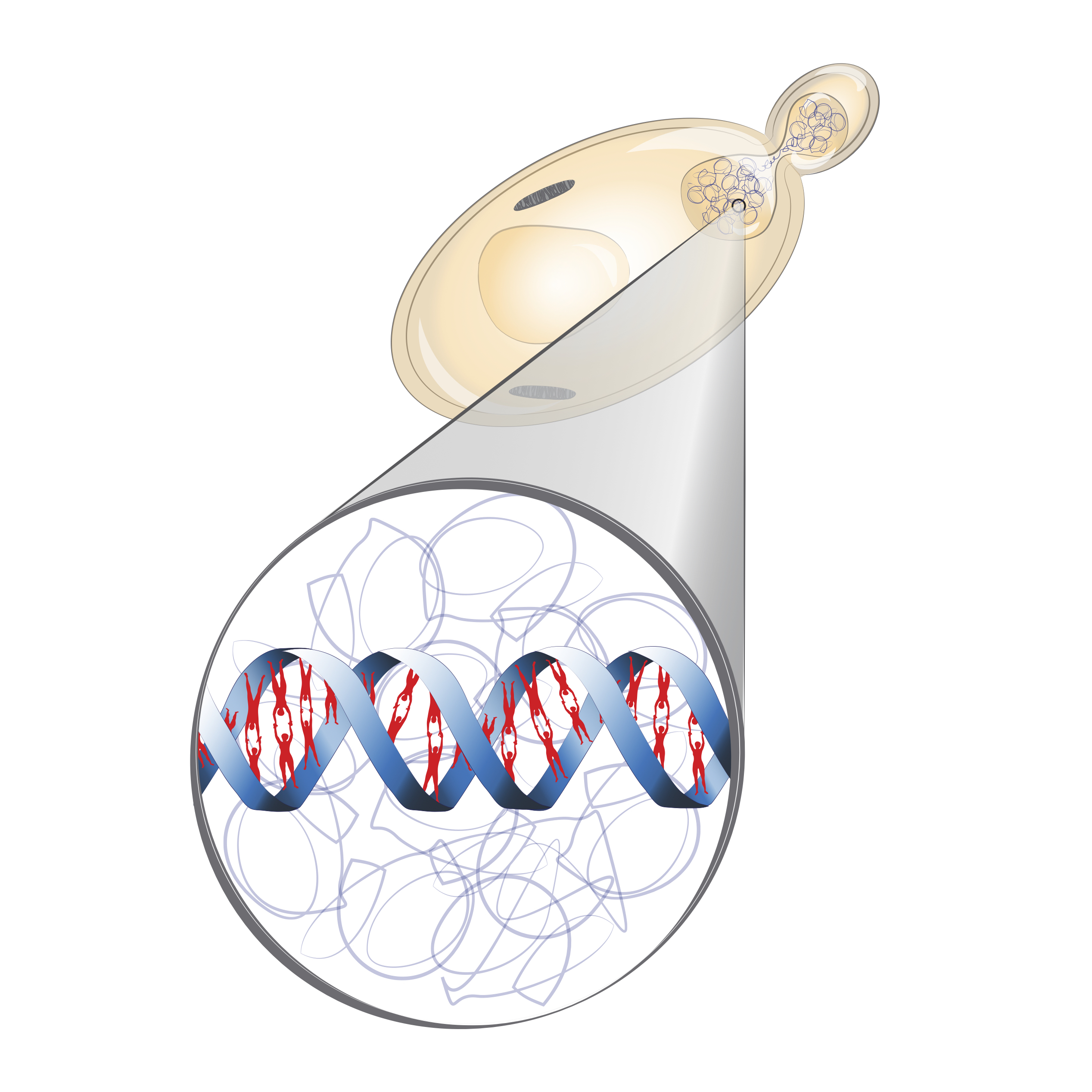 Edward Marcotte and his colleagues at the University of Texas at Austin created hundreds of strains of humanized yeast by inserting into each a single human gene and turning off the corresponding yeast gene. Illustration: Jacqui Tabler.

AUSTIN, Texas — Despite a billion years of evolution separating humans from the baker’s yeast in their refrigerators, hundreds of genes from an ancestor that the two species have in common live on nearly unchanged in them both, say biologists at The University of Texas at Austin. The team created thriving strains of genetically engineered yeast using human genes and found that certain groups of genes are surprisingly stable over evolutionary time.

The research, published May 22 in the journal Science, paves the way for using humanized yeast to better understand genetic disorders and to screen drugs for treating the diseases.

Although yeast consist of a single cell and humans have trillions of cells organized into complex systems, we share thousands of similar genes. Of those, about 450 are critical for yeast’s survival, so researchers removed the yeast version of each one and replaced it with the human version and waited to see whether the yeast would die. Creating hundreds of new strains of yeast, each with a single human gene, resulted in many newly engineered strains — nearly half, in fact — that could survive and reproduce after having human genes swapped in for their ordinary ones. 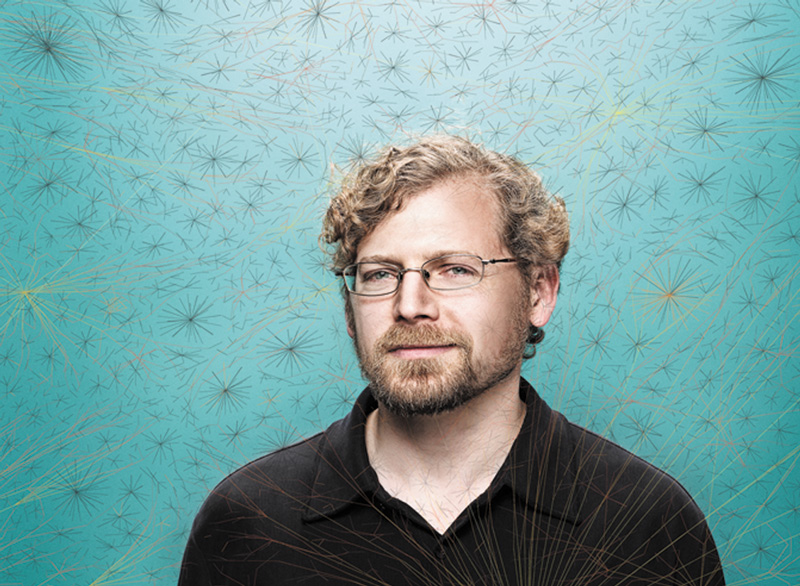 “Cells use a common set of parts and those parts, even after a billion years of independent evolution, are swappable,” said Edward Marcotte, professor in the university’s Department of Molecular Biosciences and co-director of the Center for Systems and Synthetic Biology (CSSB). “It’s a beautiful demonstration of the common heritage of all living things — to be able to take DNA from a human and replace the matching DNA in a yeast cell and have it successfully support the life of the cell.”

The work has applications for human health in that some genetic diseases caused by mutations could be tested in new ways. Future studies might compare different strains of humanized yeast, each with slightly different versions of the same human gene, to better understand how certain mutations affect a person’s health. Researchers also could insert precise versions of a human gene mutation into yeast and then expose the yeast to different drugs to test new therapies.

“We could find out if one of the standard treatments would work on your particular version of the gene or if maybe another drug would be even better,” says Claus Wilke, a professor in the Department of Integrative Biology and co-author of the paper.

Marcotte speculates that there might be another 1,000 or so pairs of swappable genes between humans and yeast. Along with the approximately 200 swappable genes already identified, these might be useful in searching for drugs to treat a host of human genetic diseases.

This kind of gene swap experiment between humans and yeast has been done for single genes before, but this is the first large-scale study to swap hundreds of gene pairs. The large number of tests allowed team member Jon Laurent, a graduate student in the CSSB and co-author of the paper, to look for underlying rules for what makes a gene swappable.

Surprisingly, the best predictor of whether two genes could be successfully swapped was not how similar their genetic sequences were, but rather which modules they were part of. A module is a group of genes that work together to do something useful, such as produce cholesterol to build cell walls. All the genes from the same module tended either to be swappable between humans and yeast, or not. 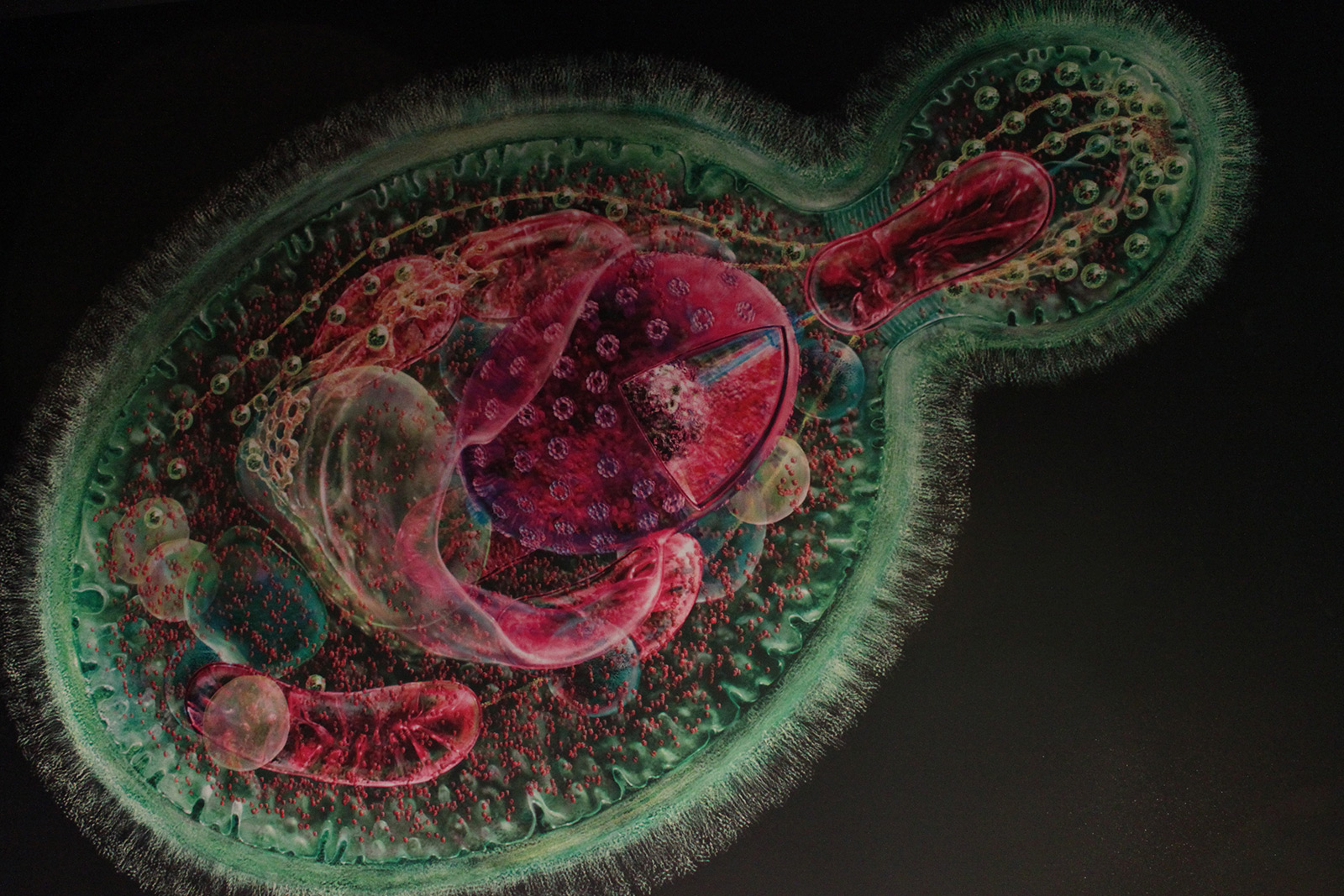 Image of a yeast cell from a 2011 exhibit titled “From Another Kingdom” at the National Botanic Garden of Wales. Photo credit: Col Ford and Natasha de Vere. Image rights: Creative Commons Attribution 2.0.

“The exciting part is that we can now use this information to swap entire systems involving dozens of genes at a time and ask if that system works as well as the natural system in yeast,” says Aashiq Kachroo, postdoctoral researcher in the CSSB and co-author of the paper. “That will be fascinating because now we won’t be just looking at a gene, but 30 different genes from a human in a simple cell.”

In addition to Marcotte, Wilke, Kachroo and Laurent, the paper’s other co-authors are: Christopher Yellman, research associate in the CSSB; and Austin Meyer, postdoctoral fellow in the Center for Computational Biology and Bioinformatics.

Support for this research came from the Cancer Prevention Research Institute of Texas, the National Institutes of Health, the Defense Threat Reduction Agency, the National Science Foundation and the Welch Foundation.