When a NASA spacecraft sets off to explore Jupiter’s icy moon Europa to look for the ingredients of life, radar equipment designed to pierce the ice of Antarctica will be among the passengers.

Ice-penetrating radar technology developed by The University of Texas at Austin Institute for Geophysics (UTIG), a research unit of the Jackson School of Geosciences, will be the foundation for one of nine scientific instruments selected last week by NASA to be carried by the spacecraft that is scheduled to launch in the 2020s.

The instruments will be tasked with scanning Europa for environments that could sustain life. Scientists think that Europa could be one of the best places in our solar system to look for habitable conditions because there is evidence of an ocean of water under the thick ice that completely covers the moon, as well as sulfuric compounds, one of life’s chemical building blocks, on its surface. 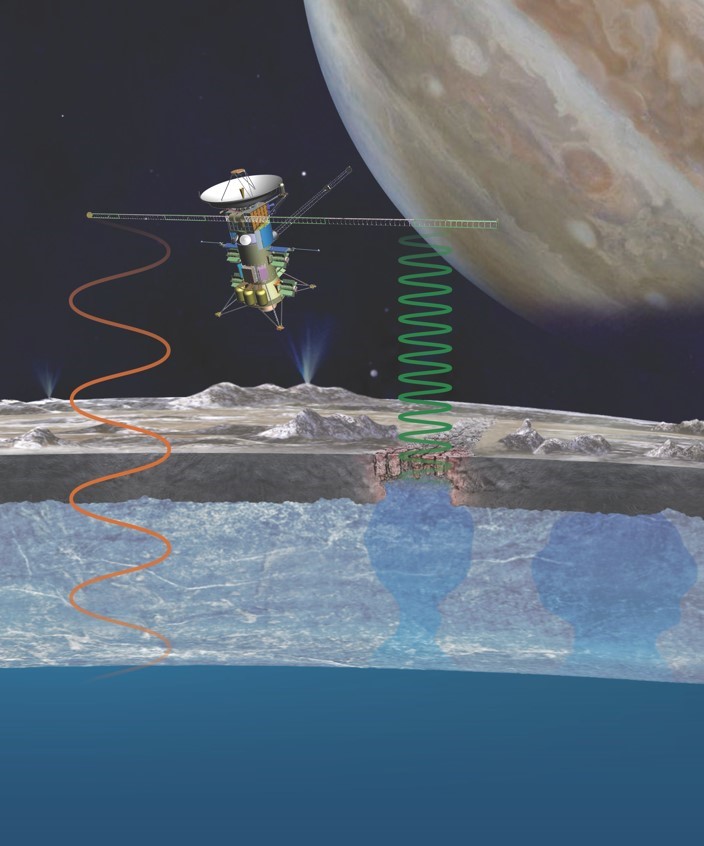 The REASON (Radar for Europa Assessment and Sounding: Ocean to Near-surface) instrument overseen by principal investigator Donald Blankenship of UTIG will allow researchers to see the subsurface landscape of Europa’s ice shell all the way to the ocean below.

The radar’s most important function, Blankenship said, will be to spot pockets of water within the ice shell that could serve as a passageway for chemicals on the moon’s surface to the ocean below — an environment where life could potentially develop.

These water pockets are thought to be formed by a buoyant upwelling of warm ice, called a “diapir,” rising from the bottom of the ice toward the surface. As the diapir rises, it melts and collapses the surface of the ice, mixing surface chemicals with the subsurface water below.

On Earth, portions of floating ice shelves that have collapsed form toppled icebergs. Similar iceberg terrains called “chaos” were observed on Europa’s surface by NASA’s Galileo spacecraft nearly 20 years ago. But it will take Blankenship’s radar to confirm whether chaos terrains are signs of passageways to the ocean below.

To ensure effective penetration of Europa’s ice, the radar will use two frequencies, a shorter 60 MHz wave and a longer 9 MHz wave. The longer wave can pass through Europa’s ice without being scrambled by rough patches. However, radio waves emitted by the planet Jupiter interfere with the signal, so it can be used only on the side of Europa facing away from the planet. The shorter waves, in contrast, are unaffected by Jupiter, but they are more susceptible to interference from the roughness of Europa’s ice.

“By using two frequencies, the radar can present a more comprehensive and clear image of Europa’s ice shell,” Blankenship said.

Blankenship and his Texas team are also collaborating with the European Space Agency and Italian Space Agency on their plans for a radar instrument focused on Jupiter’s moon Ganymede, the largest moon in the solar system. And since the 1990s, he has been using a similar ice-penetrating radar system carried by plane to study the substructure of the ice sheets of Antarctica and Greenland. 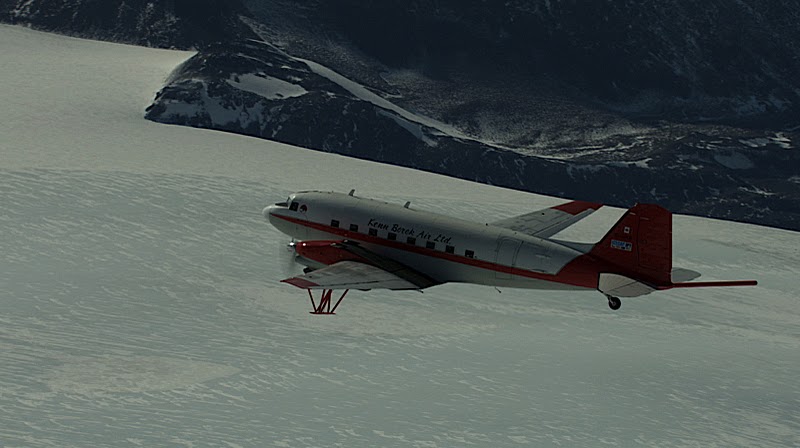 Ice-penetrating radar technology developed by The University of Texas at Austin Institute for Geophysics for use in Antarctica and Greenland will scan Europa to look for environments that could sustain life. Here the radar is used from a DC-3 in Antarctica. UTIG/BBC

The radar for the NASA mission will be similar in size to the radar systems Blankenship uses on Earth; the antennas will be separated by 16 meters (a little more than 50 feet), about the same as on the DC-3 aircraft used by UTIG for studies of Earth’s ice sheets.

Engineers at NASA’s Jet Propulsion Laboratory and the University of Iowa will build the REASON instrument, overseen by UTIG. Blankenship has also organized a 20-person science team to advise on the radar’s construction and its data acquisition and analysis. This team includes scientists from the UT Austin Institute for Geophysics, the Jet Propulsion Laboratory, the Johns Hopkins Applied Physics Laboratory, Washington University in St. Louis, the Smithsonian Institution, Arizona State University, the University of Iowa, the University of California Santa Cruz, NASA Ames Research Center, the Planetary Science Institute, Georgia Tech and NASA Goddard Space Flight Center, as well as German, French and Italian institutions.

Because of the long-term nature of the work — it will be a decade or more before the spacecraft reaches Europa — the team pairs senior scientists with early career ones to ensure a continuity of knowledge throughout the duration of the mission.

“It’s a lifetime-scale process,” said Duncan Young, a UTIG Antarctic researcher and team member. Krista Soderlund, an expert on planetary oceanography, and Cyril Grima, a planetary radar expert, are other UTIG researchers on the science team.

For scientists, the radar data will not only be a treasure trove of information about Europa’s substructure, it will also provide reconnaissance critical for any future lander missions. REASON will search for potential water plumes that are either erupting into space or have left their signature through snow deposits on the surface. The findings have the potential to have societal impact well beyond the planetary scientific community.

“If you go to this completely different environment, one that has all the chemistry to support life, and it actually turns out to have life, in the end you’ve got two examples in one solar system of life emerging,” Young said. “It would imply that all those exoplanets that they’re finding out there may have something in them as well.”