AUSTIN, Texas — Improving air quality — in clean and dirty places — could potentially avoid millions of pollution-related deaths each year. That finding comes from a team of environmental engineering and public health researchers who developed a global model of how changes in outdoor air pollution could lead to changes in the rates of health problems such as heart attack, stroke and lung cancer.

Joshua S. Apte of the Cockrell School of Engineering at The University of Texas Austin was lead author of the paper, published June 16 in Environmental Science & Technology. The paper was co-authored by Julian D. Marshall of the University of Minnesota, Aaron J. Cohen of the Health Effects Institute in Boston, and Michael Brauer of the University of British Columbia.

Prior research has emphasized the health implications of breathing polluted air. This new study is the first detailed analysis of how improvements in particulate air pollution worldwide would yield improvement in health, and where those improvements would occur.

The researchers looked at outdoor air pollution from particulate matter (PM) smaller than 2.5 microns. Those particles can enter deep into the lungs. Breathing PM is associated with increased risk of heart attack, stroke and other cardiovascular disease; respiratory illnesses such as emphysema; and cancer. PM pollution comes from fires, coal power plants, cars and trucks, and agricultural and industrial emissions. In low-income countries, PM also comes from burning coal, wood, crop waste and animal dung for cooking and heating, and from open burning of trash.

“We wanted to determine how much cleaner different parts of the world would need to be in order to substantially reduce death from particulate matter,” said Apte. “We believe our model could help in designing strategies to protect public health.” 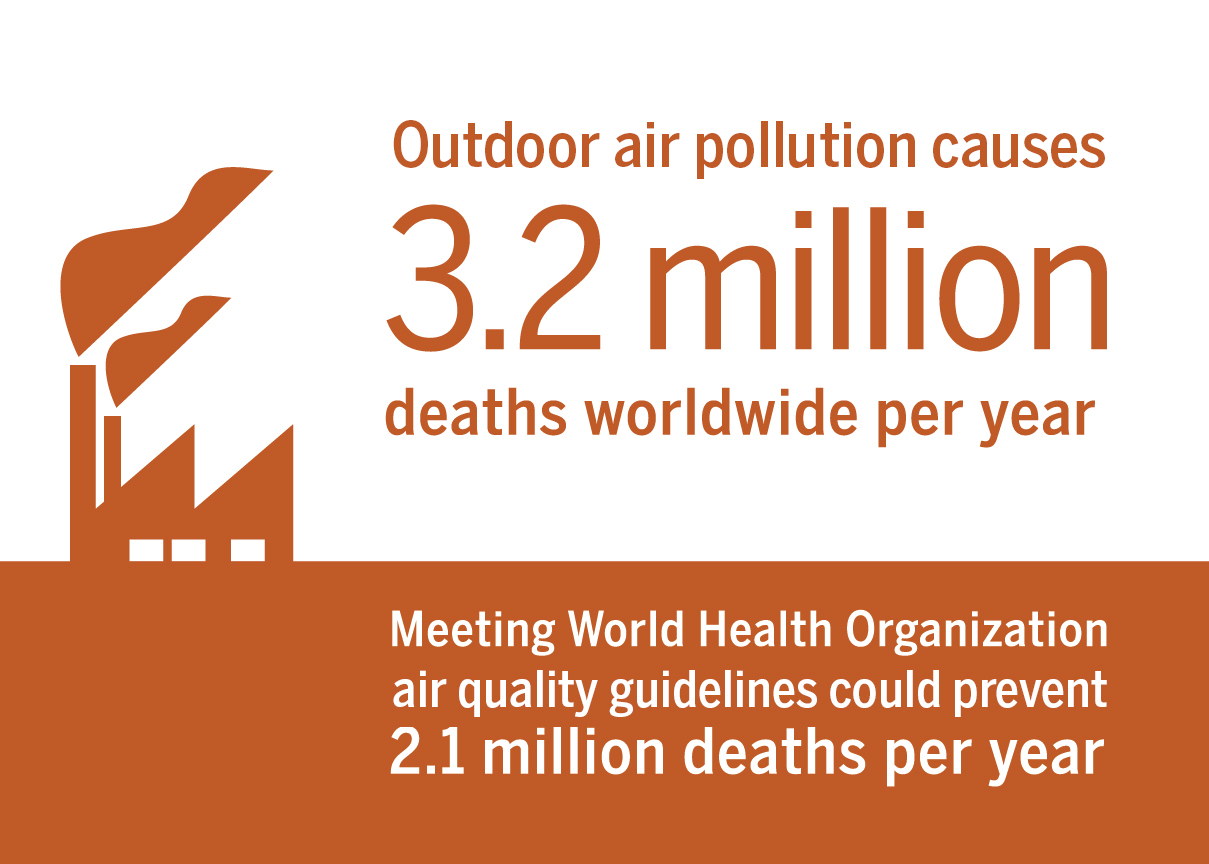 The study used the Institute of Health Metrics and Evaluation’s Global Burden of Disease 2010 database; estimates of PM concentrations derived from ground-based measurements, satellite observations and air pollution models; and WHO’s air quality guidelines. Worldwide, most people live in areas with PM concentrations far above WHO’s air quality guideline of 10 micrograms per cubic meter, with some parts of India and China experiencing levels that exceed 100.

Confirming the researchers’ expectations, the study demonstrated major potential to reduce mortality from PM in the world’s most polluted regions.

One of the study’s unexpected findings is that cleaning air in less polluted parts of the world, including in North America and Western Europe, can have as much health benefit as similar measures taken in the most polluted areas.

“We were surprised to find the importance of cleaning air not just in the dirtiest parts of the world — which we expected to find — but also in cleaner environments like the U.S., Canada and Europe,” said co-author Marshall.

“If we only meet U.S. Environmental Protection Agency standards, we aren’t fully addressing the problem,” said Marshall. “This study demonstrates the benefits of stringent air quality controls in the U.S. as well as overseas.”

Another important finding is that because of aging populations, health risks in many countries will increase even if pollution levels are constant. Older people are more susceptible to air pollution and more at risk than are younger people for health problems such as heart attack and stroke. The study found that with no changes in air pollution, deaths per capita from air pollution would increase 20 to 30 percent during the next 15 years in India and China. If also accounting for population growth, the increase in deaths would be even greater if those countries experience no change in air pollution.

The study helps to meet a gap in knowledge about how stricter outdoor air pollution controls could benefit global health. In May, WHO called for more research into air pollution and passed a resolution to address the health effects of air pollution, which they call “the world’s largest single environmental risk.”

“Our study demonstrates that continued progress on air quality can deliver major public health benefits to nearly all regions of the world,” co-author Brauer said.

Funding for the study came from the participating organization and universities.