AUSTIN, Texas — In one of the largest and most detailed studies of animal molecular biology ever undertaken, researchers at The University of Texas at Austin and the University of Toronto discovered the assembly instructions for nearly 1,000 protein complexes shared by most kinds of animals, revealing their deep evolutionary relationships. Those instructions offer a powerful new tool for studying the causes of diseases such as Alzheimer’s, Parkinson’s and cancer. 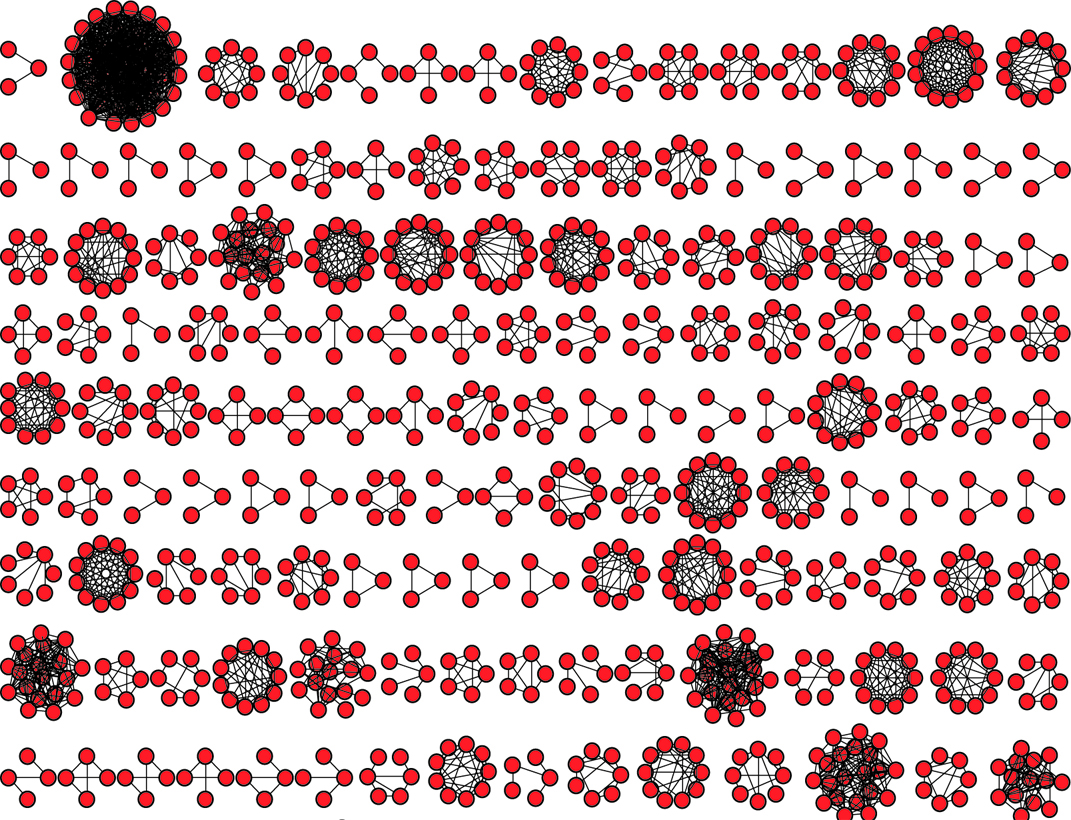 Researchers created the world’s largest protein map, identifying nearly 1,000 protein complexes that are shared across the tree of life. This image shows a small portion of that map. Photo courtesy of Jovana Drinjakovic

Proteins come together to form protein complexes, or molecular machines, to carry out many specific biological functions in cells. The authors of the study, published this week in the journal Nature, identified nearly 1,000 molecular machines critical for the development and survival of species as diverse as sea anemones, worms, mice and humans. For example, the researchers found identical protein complexes required by the cells that organize the proper formation of the head and eye across the different species.

They also mapped out which proteins stick together to form the complexes—called protein-protein interactions—revealing important processes for the proper functioning of cells.

“Essentially, we were able to construct a sort of assembly diagram of how thousands of different proteins come together to carry out their proper roles inside the cells of most kinds of animals,” said lead UT Austin researcher Edward Marcotte, a professor of molecular biosciences. “Protein assemblies in humans were often identical to those in other species. This not only reinforces what we already know about our common evolutionary ancestry, it also has practical implications, providing the ability to study the genetic basis for a wide variety of diseases and how they present in different species.”

Proving these commonalities will allow researchers more opportunity to study disease proteins and learn about how they are assembled in different species.

“By understanding how the protein complexes come together across very different organisms, we can find relevancies to humans and human health,” Marcotte added.

“For me the highlight of the study is its sheer scale,” says Andrew Emili, a professor from the Donnelly Centre in Toronto, who jointly led the study. “We have tripled the number of known protein interactions for every species. So across all the animals, we can now predict, with high confidence, more than 1 million protein interactions – a fundamentally ‘big step’ moving the goal posts forward in terms of protein interaction networks.”

This study builds on an earlier paper that looked only at human protein complexes. That study was published in the journal Cell in 2012. The current, broader study employed more than a year of mass spectrometer time split between the two institutions, making it one of the largest investigations of protein complexes ever undertaken.

Marcotte and the UT Austin team were joined on the project by Emili and four other teams working at the University of Toronto.