AUSTIN, Texas — Scientists have solved a longstanding mystery about how some fish seem to disappear from predators in the open waters of the ocean, a discovery that could help materials scientists and military technologists create more effective methods of ocean camouflage.

In a paper published this week in Science, a team led by researchers at The University of Texas at Austin reports that certain fish use microscopic structures called platelets in their skin cells to reflect polarized light, which allows the fish to seemingly disappear from their predators.

Polarized light is made up of light waves all traveling in the same plane, such as the bright glare you sometimes see when sunlight reflects off the surface of water.

Under the surface of the water, light tends to be polarized. Many fish—and sophisticated modern satellites—have the ability to detect variations in such polarized light.

The U.S. Navy has sought for many years to learn how to hide in open water and supported the work of Cummings and her colleagues exploring how fish avoid detection in the open ocean. In a previous study, the researchers demonstrated in the lab that a fish called the lookdown was able to manipulate polarized light to its advantage. The new study—conducted in the actual ocean, not just in test environments—shows lookdowns and other fish that live in the open ocean camouflage themselves this way. 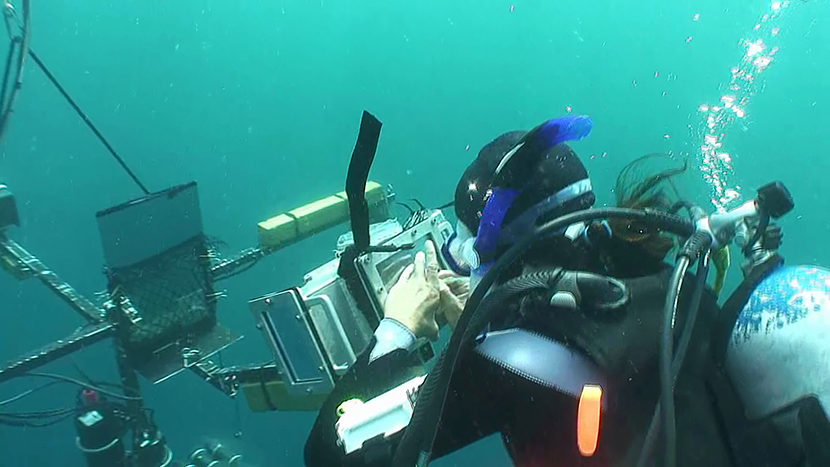 Molly Cummings adjusts the video polarimeter on the automated rotating platform the team used for the study.

Parrish Brady, a collaborator with Cummings and lead author on the new study, built a video polarimeter that can record polarized light in real time, allowing the researchers to essentially see polarized light as fish do.

Brady and Cummings worked with scientists from City College of New York, Texas A&M University and other institutions to build an automated rotating platform that would hold the fish in place in the water while Brady’s polarimeter took constant measurements.

On the platform, a fish is held in place on a mirror, while an adjustable arm holds the video polarimeter a meter away. Once started, the platform takes three minutes to spin 360 degrees, with the polarimeter recording the whole time.

After every revolution researchers would make an adjustment, such as moving the polarimeter to a slightly different angle or adjusting how much the fish was tilted, and then start the apparatus on another rotation.

More than 1,500 different angular configurations were recorded in this way for each fish, taking into account camera location, angle of the sun overhead and position of the fish. Recordings were conducted in the Florida Keys and Curaçao for five species of fish.

The results showed that the two fish from the open ocean, the lookdown and the bigeye scad, had much better camouflage in polarized light than a mirror had. They also blended in better than two reef-dwelling fish and one surface-skimming fish, all of which live in environments where polarized light is not as important.

Notably, the open ocean fish were most camouflaged in what are called “chase angles,” which extend out 45 degrees in all directions from the tail or head. These are the directions from which a predator would chase the fish, or from which the fish would pursue its own prey.

As to how the fish accomplish this concealment, the Cummings lab found that the fish’s ability to camouflage in polarized light is due to the structure of platelets within the skin cells, which scatter polarized light differently depending on the angle. The researchers will next look into whether the fish can actively manipulate this ability, maybe by changing the angle at which they swim or somehow adjusting the platelets within their skin.

Many fish that live in the open ocean are silvery, which allows them to reflect light as a mirror does. For many years, experts assumed this was the main means of camouflage among such fish, but this camouflage approach works well only if the surrounding water appears uniform, as it does to human eyes. Polarized light turns out to be an important component of the underwater light field, and it is not uniform but instead highly variable. Using mirrors for camouflage in such an environment can actually backfire and make it easier to stand out in the open ocean. 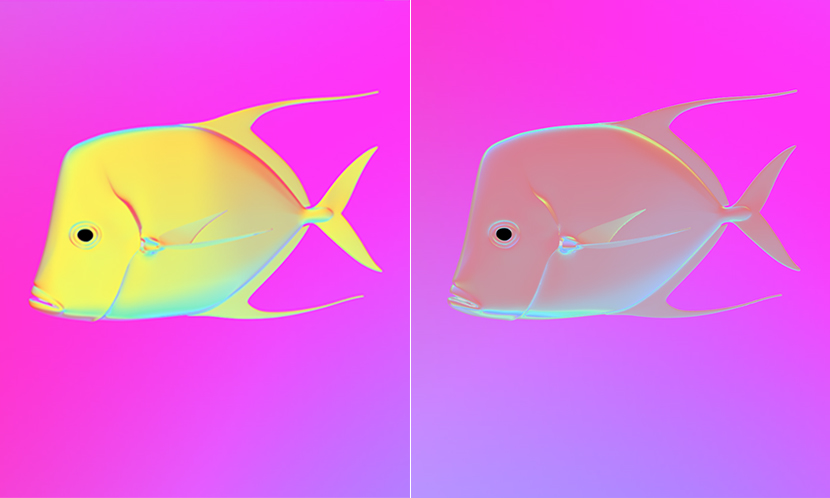 Simulated view of how the lookdown fish would appear in polarized light with mirrored skin (left) versus skin that reflects polarized light (right). Images are from simulations created by the Cummings lab.

The research was supported by the U.S. Navy, the National Science Foundation and a College of Natural Sciences Catalyst Grant, which provides seed funding for interdisciplinary research collaborations at The University of Texas at Austin.