AUSTIN, Texas — Researchers in the Cockrell School of Engineering at The University of Texas at Austin have designed an antenna that is able to process incoming and outgoing radio-wave signals more efficiently and without the need for separate bulky and expensive electrical components commonly used in antenna systems. This new technology could lead to significantly faster, cheaper and clearer telecommunications in the future.

Andrea Alù, associate professor in the Department of Electrical and Computer Engineering, along with postdoctoral fellows Yakir Hadad and Jason Soric, discuss their non-reciprocal antenna’s design and capabilities in the Proceedings of the National Academy of Sciences. Their article will be published online this month.

The research team’s breakthrough design is an antenna that can break reciprocity, or the natural symmetry in radiation that characterizes conventional antennas. In textbooks, the angular patterns for antenna transmission and reception have been assumed to be the same — if the antenna opens a door to let signals out, signals can come back through that same door and leak toward the source. By breaking reciprocity, the UT Austin researchers’ new antenna can independently control incoming and outgoing signals with large efficiency.

The main advantage of this technological advancement is the possibility of sending out a signal while keeping out noise and echoes that come back toward the antenna, enabling faster data rates and improved connections while requiring less bulky antenna systems. Beyond telecommunications, the new antenna technology may be applied to sensors used in applications as diverse as health care and weather tracking, allowing the sensors to pick up stronger signals for more accurate data collection.

Conventional antennas are subject to reciprocity, implying that they unavoidably transmit and receive signals with the same efficiency. This means that if a conventional antenna is a very good emitter of radio-wave signals toward a certain direction, it is also a very good receiver from the same direction. As it happens, this property is not always a beneficial feature because transmitting antennas are prone to absorb surrounding reflections or echoes that bounce back from nearby obstacles. This noise deteriorates the quality of the transmission signals.

“Our achievement is that we break the symmetry between transmission and reception signals, so we are able to prevent the antenna from having to listen to reflections and echoes that affect the source,” Alù said. “We show that it is possible to efficiently overcome these constraints using temporally modulated traveling-wave antennas.” 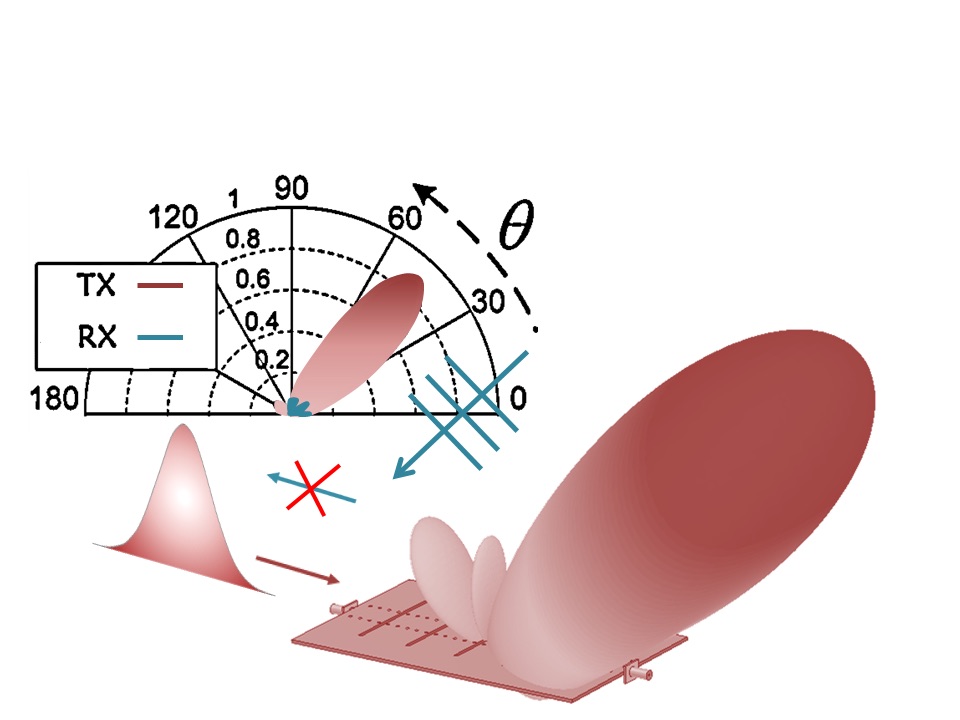 Associate professor Andrea Alù and his team have designed a non-reciprocal antenna that can independently control incoming and outgoing radio-wave signals with greater efficiency. Cockrell School of Engineering

Presently in the telecommunications field, magnet-based isolators are commonly used as part of antenna systems to prevent received signals from traveling into the transmission amplifier. The researchers believe their new antenna may be an efficient solution to significantly reduce the need of isolators and reduce the size and cost of telecommunication systems.

The researchers are now looking into how this concept may be extended to other applications such as optics. They envision that by pushing these concepts to higher frequencies, it will be possible to break a similar constraint affecting energy-harvesting devices such as thermophotovoltaic cells. The researchers believe that their antenna experiment, extended to the infrared part of the spectrum, may provide a route toward more efficient energy-harvesting platforms.

This work received support from the Office of Naval Research, the National Academy of Engineering’s Frontiers of Engineering program and The Grainger Foundation.