AUSTIN, Texas — Research published in the May 6 edition of Science indicates that slow-motion earthquakes or “slow-slip events” can rupture the shallow portion of a fault that also moves in large, tsunami-generating earthquakes. The finding has important implications for assessing tsunami hazards. The discovery was made by conducting the first-ever detailed investigation of centimeter-level seafloor movement at an offshore subduction zone.

“These data have revealed the true extent of slow-motion earthquakes at an offshore subduction zone for the first time,” said Laura Wallace, a research scientist at The University of Texas at Austin’s Institute for Geophysics who led the study.

An international team of researchers from the U.S., Japan and New Zealand collaborated on the research. The Institute for Geophysics is a research unit of The University of Texas Jackson School of Geosciences. 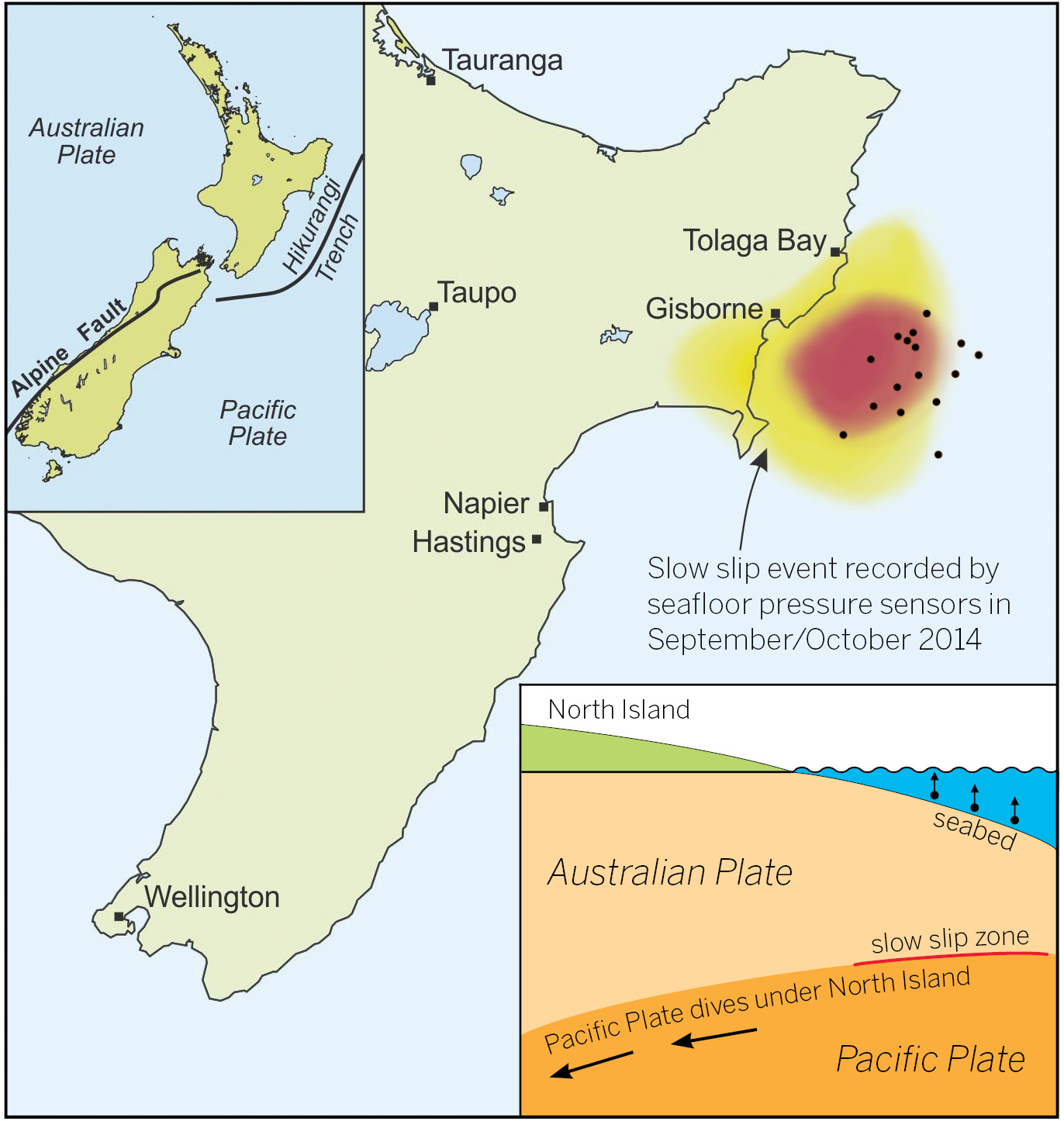 A graphic illustrating seismic zones and activity in New Zealand. The figure on the bottom right shows the horizontal and vertical movement caused by a slow-slip event. GNS Science/Laura Martin

The world’s most devastating tsunamis are generated by earthquakes that occur near the trenches of subduction zones, places where one tectonic plate begins to dive or “subduct” beneath another. Using a network of highly sensitive seafloor pressure recorders, the team detected a slow-slip event in September 2014 off the east coast of New Zealand. The study was undertaken at the Hikurangi subduction zone, where the Pacific Plate subducts beneath New Zealand’s North Island.

The slow-slip event lasted two weeks, resulting in 15-20 centimeters (about 6-8 inches) of movement along the fault that lies between New Zealand and the Pacific Plate, a distance equivalent to three to four years of background plate motion. If the movement had occurred suddenly, rather than slowly, it would have resulted in a magnitude 6.8 earthquake. The seafloor sensors recorded up to 5.5 centimeters (about 2 inches) of upward movement of the seafloor during the event.

Slow-slip events are similar to earthquakes, but instead of releasing strain between two tectonic plates in seconds, they do it over days to weeks, creating quiet, centimeter-sized shifts in the landscape. In a few cases, these small shifts have been associated with setting off destructive earthquakes, such as the magnitude 9 Tohoku-Oki earthquake that occurred off the coast of Japan in 2011 and generated a tsunami that caused the Fukushima Daiichi nuclear power plant disaster.

The slow-slip event that the team studied occurred in the same location as a magnitude 7.2 earthquake in 1947 that generated a large tsunami. The finding increases the understanding of the relationship between slow slip and normal earthquakes by showing that the two types of seismic events can occur on the same part of a plate boundary.

The link has been difficult to document in the past because most slow-slip monitoring networks are land-based and are located far from the trenches that host tsunami-generating earthquakes, Wallace said. The data for this study was recorded by HOBITSS, a temporary underwater network that monitored slow-slip events by recording vertical movement of the seafloor. HOBITSS stands for “Hikurangi Ocean Bottom Investigation of Tremor and Slow Slip.”

“Our results clearly show that shallow, slow-slip event source areas are also capable of hosting seismic rupture and generating tsunamis,” said Yoshihiro Ito, a professor at Kyoto University and study co-author. “This increases the need to continuously monitor shallow, offshore slow-slip events at subduction zones, using permanent monitoring networks similar to those that have been established offshore of Japan.” 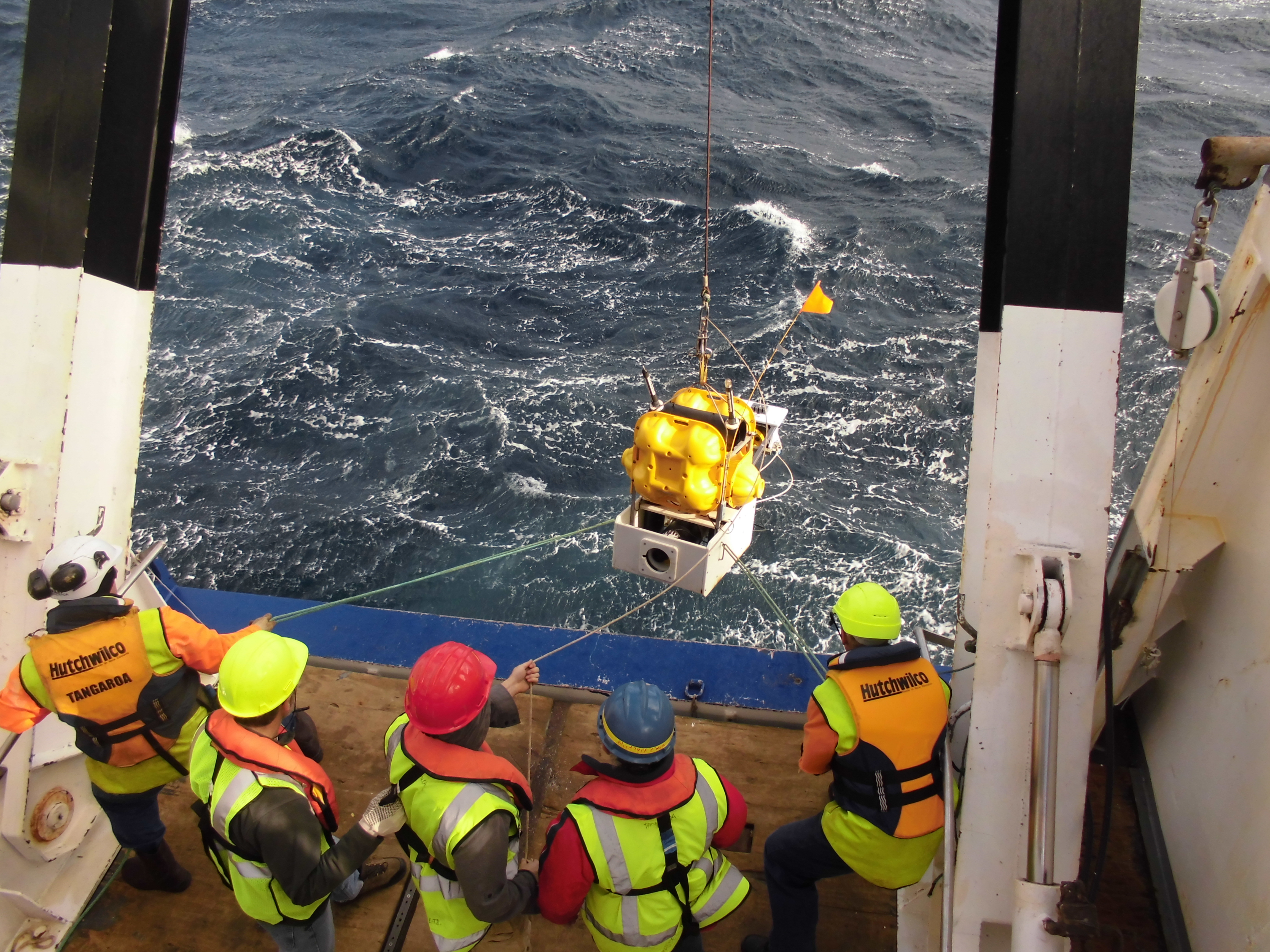 Earthquakes are unpredictable events, Wallace said, but the linkage between slow-slip events and earthquakes could eventually help in forecasting the likelihood of damaging earthquakes.

“To do that we will have to understand the links between slow-slip events and earthquakes much better than we currently do,” Wallace said.

The research team installed the HOBITSS network, consisting of 24 seafloor pressure gauges and 15 ocean bottom seismometers, in May 2014. The team collected the devices and data in June 2015.

The research was funded by the National Science Foundation; the Japan Society for Promotion of Science; Japan’s Ministry of Education, Culture, Sports, Science and Technology; and grants from participating universities and research institutions.