AUSTIN, Texas — Some of the bacteria in our guts were passed down over millions of years, since before we were human, suggesting that evolution plays a larger role than previously known in people’s intestinal-microbe makeup, according to a new study in the journal Science.

The bacteria that the researchers studied guide the early development of our intestines, train our immune systems to fight pathogens and may even affect our moods and behavior.

The research, which included an international team of scientists, was led by Howard Ochman, a professor of integrative biology at The University of Texas at Austin, and Andrew Moeller, a former graduate student at UT Austin, currently a postdoctoral researcher at the University of California, Berkeley.

“It’s surprising that our gut microbes, which we could get from many sources in the environment, have actually been co-evolving inside us for such a long time,” says Ochman, who noted that the microbes were passed down over hundreds of thousands of host generations. 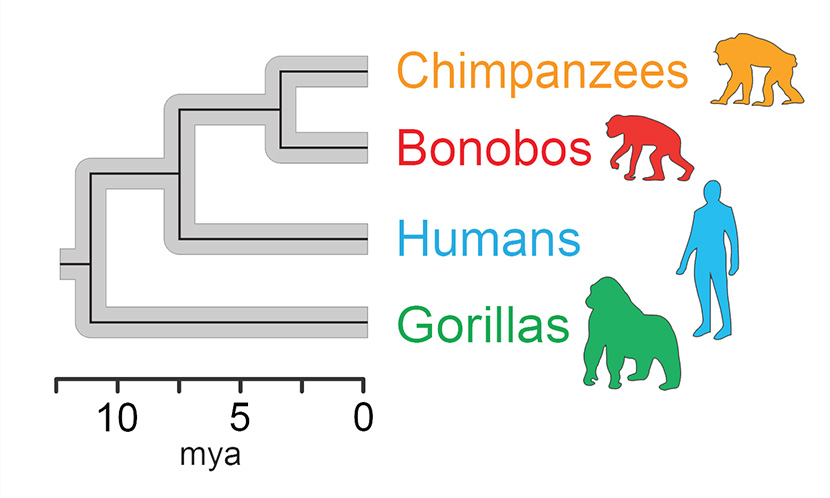 “We’ve known for a long time that humans and our closest relatives, the great apes, harbor these bacteria in our guts,” says Moeller, “and the biggest question we wanted to answer is, where did these bacteria come from? Did we get them from our environment or from our evolutionary history? And how long have they persisted in host lineages?”

Before this study, scientists disagreed about whether strains of gut microbes have continued within individual hominid lineages over timescales long enough to lead to cospeciation, a process by which two species evolve in parallel. The persistence of some microbes might have been threatened by changes in diet, geography or the use of antibiotics.

The researchers studied fecal samples collected from wild African great apes—chimpanzees, bonobos and gorillas—and also from people living in Connecticut. Fossil and genetic evidence have established that all four species, known as hominids, evolved from a common ancestor that lived more than 10 million years ago.

Fecal samples contain microbes shed from a host animal’s gut. The scientists used gene sequencing to analyze all the different versions of one specific bacterial gene present in each fecal sample. From these data, they reconstructed evolutionary trees for three groups of gut bacteria that make up over 20 percent of the human gut microbiome.

For two of those groups, Bacteriodaceae and Bifidobacteriaceae, the bacterial evolutionary trees closely resemble the hominid evolutionary tree. There are some subtle differences, however, such as an individual bacterial strain disappearing from one of the four host species over time.

The third bacterial family tree, for a group known as Lachnospiraceae, was more complicated. There were apparently at least four times when these bacteria were transferred between different host species. The researchers speculate that because these bacteria form spores and can thus survive outside their hosts for long periods, they were easily passed between species.

The researchers are not certain how these three ancient strains of microbes were passed down from one host generation to the next for millions of years. Prior research shows that we receive our first inoculation of gut microbes from our mothers as we pass through the birth canal. Throughout life, we also receive microbes from social interactions. The researchers suspect both modes of transmission are responsible for maintaining our multigenerational relationship with our bacterial BFFs.

“What’s most exciting to me is the possibility that this codiversification between bacteria and hosts could extend much further back in time,” says Moeller. “Maybe we can trace our gut microbes back to our common ancestors with all mammals, all reptiles, all amphibians, maybe even all vertebrates. If that’s true, it’s amazing.”

This work was supported by funding from the National Institutes of Health, the Agence Nationale de Recherche sur le Sida, the Jane Goodall Institute, the Arthur L. Greene Fund and Harvard University.