PORT ARANSAS, Texas – Areas of the Arctic play a larger role than previously thought in the global nitrogen cycle—the process responsible for keeping a critical element necessary for life flowing between the atmosphere, the land and oceans. The finding is reported in a new study of the continental shelf in the Arctic Ocean published Wednesday in the journal Nature Communications.

In the new study, marine chemists and biologists from The University of Texas at Austin discovered that seabed microbes remove substantial quantities of nitrogen from the Arctic Ocean. Although the Arctic accounts for only a little more than 1 percent of the world’s continental shelves (where most nitrogen is removed), this region accounts for about 5 percent of the global ocean nitrogen removal, data researchers collected for the study show.

Scientists think that, in the past, the oceans maintained a reliable balance between nitrogen sources and nitrogen removal. This global nitrogen budget indicates that overall ocean nitrogen levels are higher now than ever before due to human activity, such as fertilizer run-off and sewage into the oceans. This perturbation throws the budget out of balance. All living things need nitrogen for survival, but excessive nitrogen can harm marine and terrestrial ecosystems. For example, excess nitrogen in the ocean can fuel growth of algae blooms, including toxic blooms that are harmful to marine life. Symptoms of nitrogen pollution include “dead zones,” fish kills, shellfish poisoning and loss of coastal habitats such as seagrass meadows and coral reefs. Natural bacteria in the ocean remove some of this extra nitrogen in the ocean by converting it to inert nitrogen gas in a process called “denitrification.”

“Microbial nitrogen removal occurs across the globe, and we were interested in how much of an impact it was making in the Arctic,” said Amber Hardison, an assistant professor of marine science at The University of Texas at Austin who was an author on the paper.

Hardison and her colleagues collaborated in the first-ever study in the Arctic region to measure several different processes that can remove nitrogen. The researchers conducted the study in the Chukchi Sea, a part of the Arctic Ocean adjacent to the Pacific Ocean and Alaska. The area is of interest not only to scientists but also to oil industry officials due to the potential for large reserves of oil and gas. The Obama administration has removed the area of Hanna Shoal in the northeast Chukchi Sea from consideration for future oil and gas leasing, and the new research adds to the environmental case for protecting the region.

“The role of this region is critically important to understand as humans put more nitrogen into the ocean via fertilizers, sewage and other sources,” Hardison said. “The Arctic is also undergoing dramatic changes linked to climate change, including a rapid decline in sea ice. As sea ice shrinks, it disrupts the natural functioning of the ecosystem, including potentially limiting the vital nitrogen removal process.” 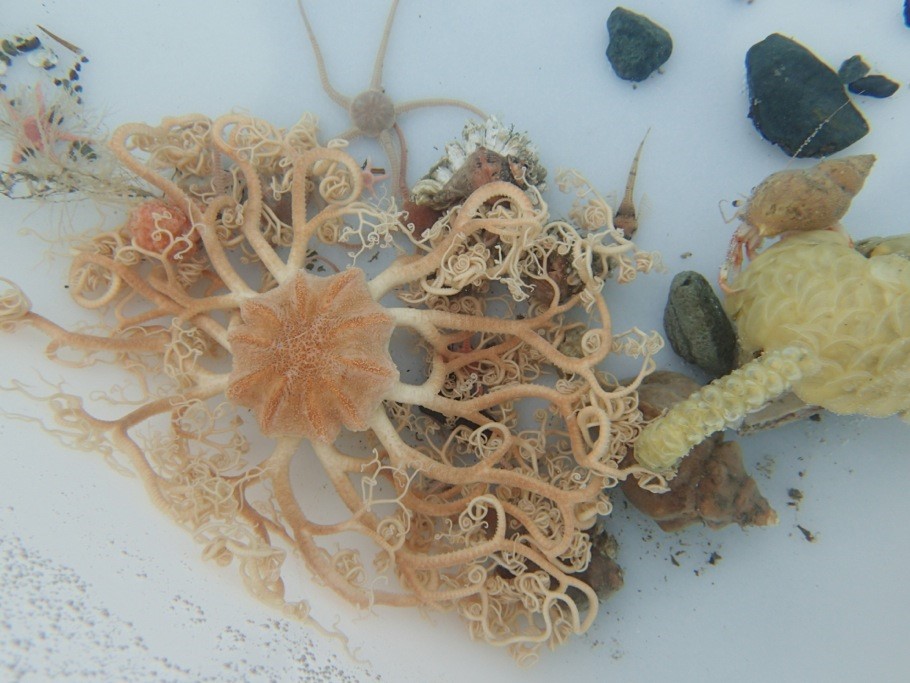 Sea animals like  seastars, clams, and snails help bacteria in the Arctic to remove excess nitrogen in the ocean. University of Texas Marine Science Institute

The scientists also discovered that the animals living on and in the seafloor play a significant role in facilitating nitrogen removal. Animals such as worms and clams make tubes and burrows in the seabed, creating a perfect space for bacteria to engage in denitrification.

“This study was a great example of the interplay of biology and chemistry and is the first time it was shown in the Arctic,” Hardison said. She warns, however, that depleted sea ice will alter the system in unknown ways, including the animals living on and in the seafloor and their facilitation of bacterial nitrogen removal.

The paper’s other authors, all at UT Austin at the time of the research, were corresponding author Nathan McTigue, a former postdoctoral fellow in Hardison’s lab now with the National Oceanic and Atmospheric Administration; Ken Dunton, a professor of marine science; and Wayne Gardner, now a professor emeritus.

The research was supported by U.S. Department of the Interior, Bureau of Ocean Energy Management.