AUSTIN, Texas — Exactly who will nominate the next Supreme Court justice is proving to be a leading factor for Texas voters as they make their choices  in the upcoming presidential election, according to the latest University of Texas/Texas Tribune statewide poll. 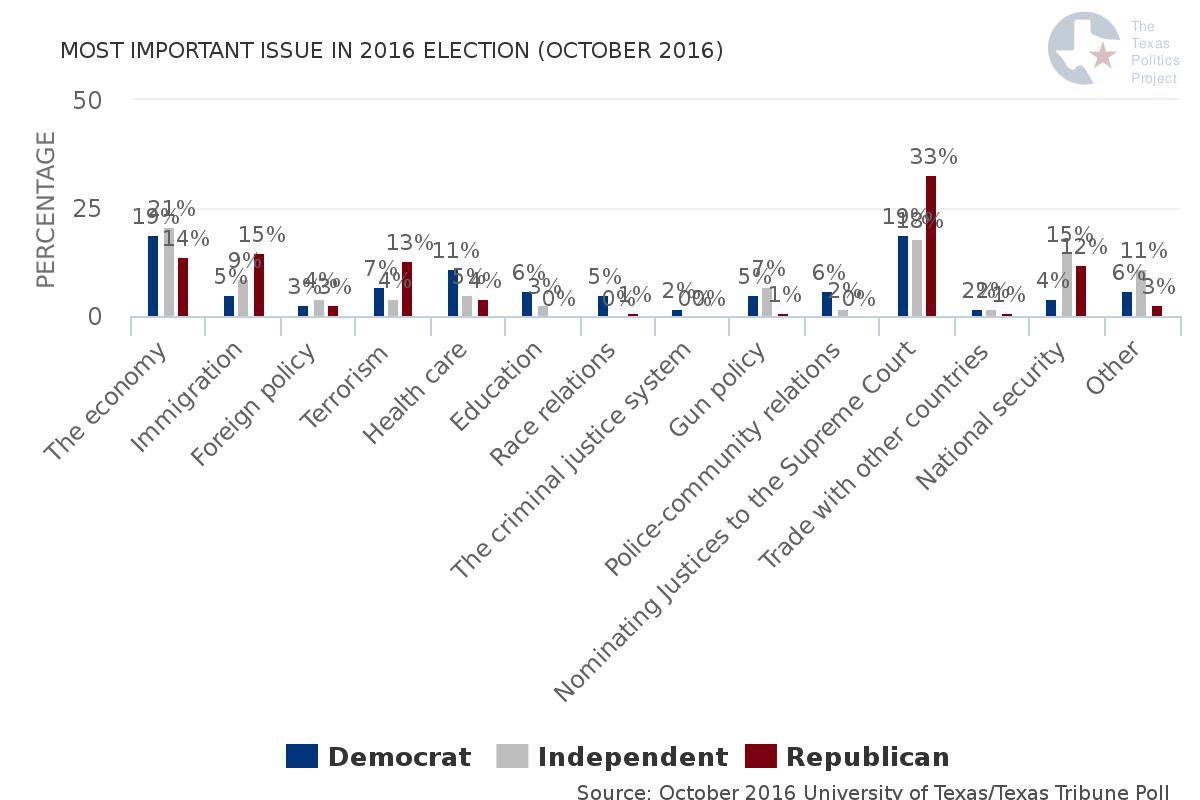 Exactly who will nominate the next Supreme Court justice is proving to be a leading factor for Texas voters as they make their choices in the upcoming presidential election, according to the latest University of Texas/Texas Tribune statewide poll. Graph courtesy of The Texas Politics Project.

As a result, Texas voters continue to favor real estate mogul Donald Trump marginally over former Secretary of State Hillary Clinton, despite a recent surge for her in the state. 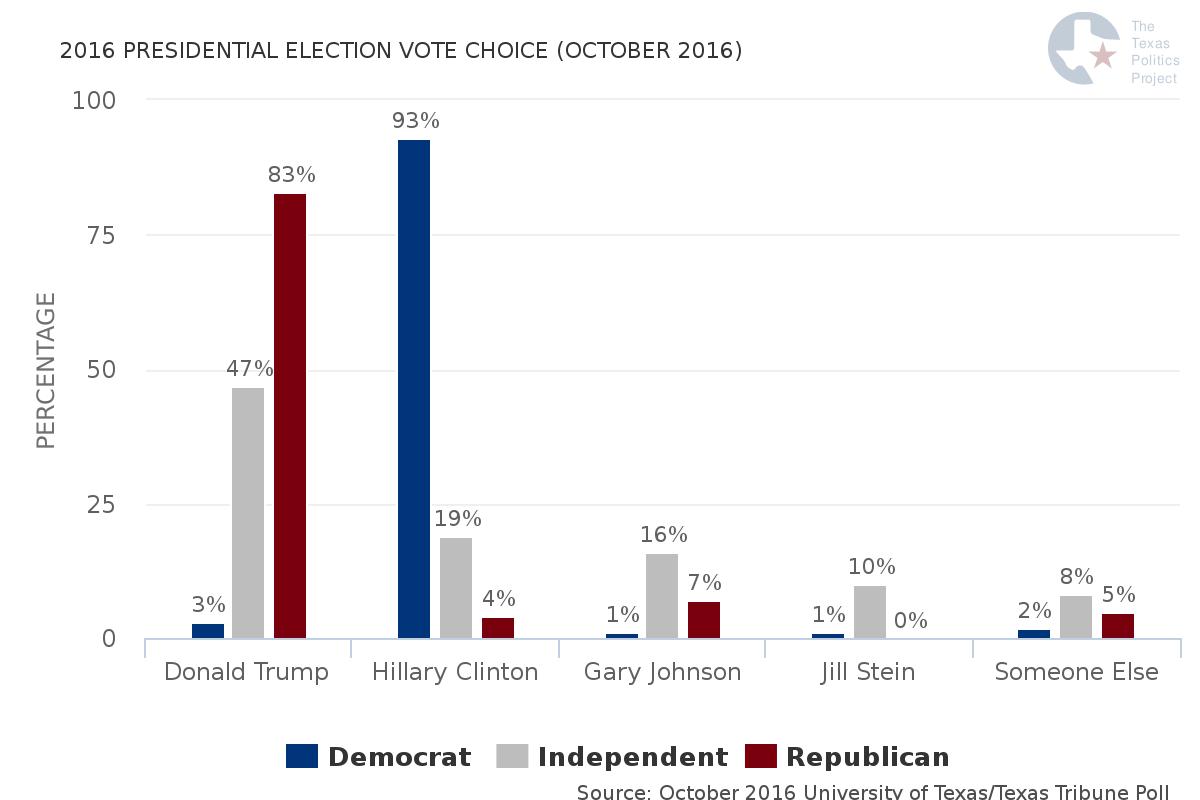 “These results affirm that the presidential race in Texas remains closer than anyone expected even a few months ago,” said James Henson, director of the Texas Politics Project at UT Austin and co-director of the poll. “Donald Trump has held a consistent lead in virtually all of the polls conducted in Texas, but that lead has dwindled and is historically low for a Republican presidential candidate in an era of GOP dominance of the state.” 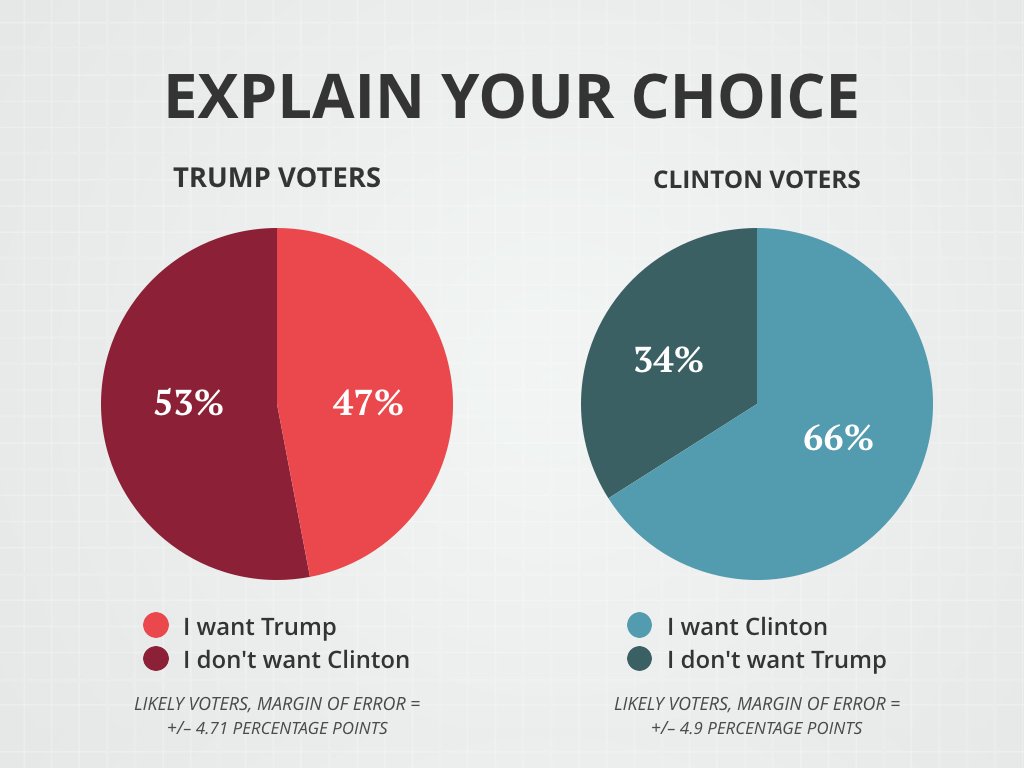 Graph courtesy of The Texas Tribune.

“While Republican ambivalence towards their nominee is unsurprising given the turn that Trump’s campaign has taken in recent weeks, the degree to which Texas Democrats have rallied around Clinton is really striking given her rejection by Sanders’ supporters in previous polling in addition to the ever-present meme of this campaign that she, like Trump, is an ‘unlikable’ candidate,” said Josh Blank, polling and research manager at the Texas Politics Project.

Both Trump and Clinton were projected to be a “poor” or “terrible” president by 54 percent of Texans polled. However, favorable projections of Clinton increased by 8 percent since the university’s June poll. In the latest poll, 34 percent of voters indicated she would be a “good” or “great” president, compared with 31 percent who said the same of Trump.

This is the latest in a series of polls conducted by UT Austin’s Texas Politics Project and The Texas Tribune. Comprehensive poll results and information about methodology will be released initially by The Texas Tribune during the next four business days. Graphics, a summary, crosstabs and a data file will be publicly available for research and teaching at the Texas Politics Project website next week.