AUSTIN, Texas — A strangely shaped depression on Mars could be a new place to look for signs of life on the Red Planet, according to a University of Texas at Austin-led study. The depression was probably formed by a volcano beneath a glacier and could have been a warm, chemical-rich environment well suited for microbial life.

The findings were published this month in Icarus, the International Journal of Solar System Studies.

A depression located inside a crater on the edge of the Hellas basin region of Mars. New research suggests that the depression was formed by volcanic activity beneath an ice sheet—an environment that could be suitable for microbial life. Joseph Levy/NASA

“We were drawn to this site because it looked like it could host some of the key ingredients for habitability — water, heat and nutrients,” said lead author Joseph Levy, a research associate at the University of Texas Institute for Geophysics, a research unit of the Jackson School of Geosciences.

The depression is inside a crater perched on the rim of the Hellas basin on Mars and surrounded by ancient glacial deposits. It first caught Levy’s attention in 2009, when he noticed crack-like features on pictures of depressions taken by the Mars Reconnaissance Orbiter that looked similar to “ice cauldrons” on Earth, formations found in Iceland and Greenland made by volcanos erupting under an ice sheet. Another depression in the Galaxias Fossae region of Mars had a similar appearance.

“These landforms caught our eye because they’re weird looking. They’re concentrically fractured so they look like a bulls-eye. That can be a very diagnostic pattern you see in Earth materials,” said Levy, who was a postdoctoral researcher at Portland State University when he first saw the photos of the depressions. 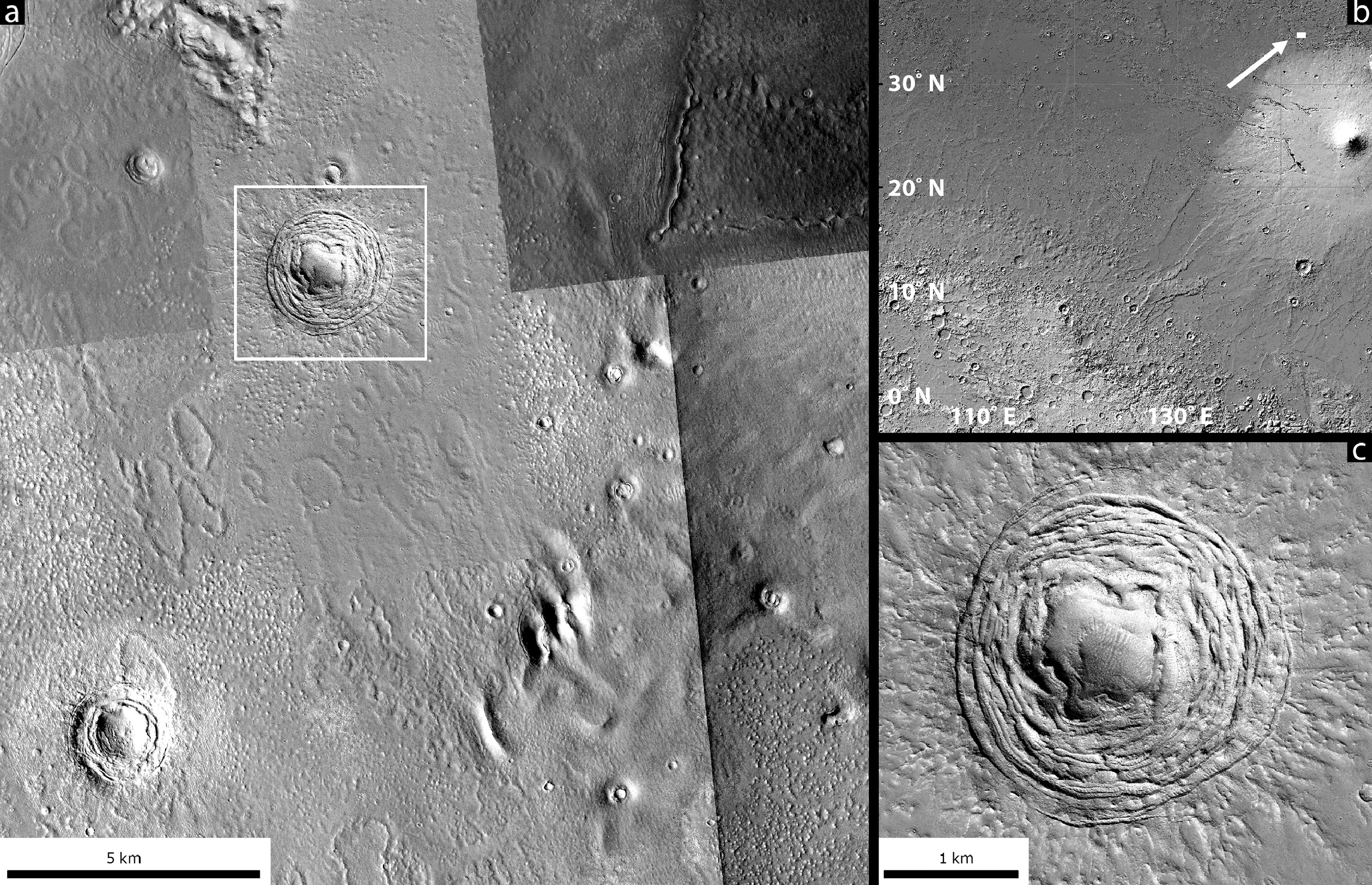 A depression in the Galaxias Fossae region of Mars viewed from multiple perspectives. New research suggests that the depression was formed by an asteroid impact. Joseph Levy/NASA

But it wasn’t until this year that he and his research team were able to more thoroughly analyze the depressions using stereoscopic images to investigate whether the depressions were made by underground volcanic activity that melted away surface ice or by an impact from an asteroid. Study collaborator Timothy Goudge, a postdoctoral fellow at the institute, used pairs of high-resolution images to create digital elevation models of the depressions that enabled in-depth analysis of their shape and structure in 3-D. Researchers from Brown University and Mount Holyoke College also participated in the study.

“The big contribution of the study was that we were able to measure not just their shape and appearance, but also how much material was lost to form the depressions. That 3-D view lets us test this idea of volcanic or impact,” Levy said.

The analysis revealed that both depressions shared an unusual funnel shape, with a broad perimeter that gradually narrowed with depth. 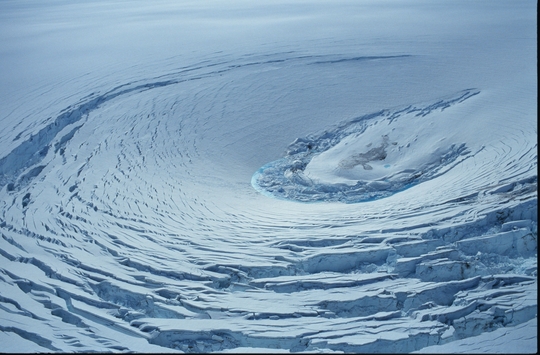 Volcanic eruptions beneath ice can create surface formations called “ice cauldrons,” such as this one that formed in Iceland’s Vatnajökull ice cap. The research suggests that a strangely shaped depression on Mars could be an ice cauldron. Oddur Sigurðsson/Icelandic Meteorological Office

“That surprised us and led to a lot of thinking about whether it meant there was melting concentrated in the center that removed ice and allowed stuff to pour in from the sides. Or if you had an impact crater, did you start with a much smaller crater in the past, and by sublimating away ice, you’ve expanded the apparent size of the crater,” Levy said.

After testing formation scenarios for the two depressions, researchers found that they probably formed in different ways. The debris spread around the Galaxias Fossae depression suggests that it was the result of an impact — but the known volcanic history of the area still doesn’t rule out volcanic origins, Levy said. In contrast, the Hellas depression has many signs of volcanic origins. It lacks the surrounding debris of an impact and has a fracture pattern associated with concentrated removal of ice by melting or sublimation.

The interaction of lava and ice to form a depression would be an exciting find, Levy said, because it could create an environment with liquid water and chemical nutrients, both ingredients required for life on Earth. He said that the Hellas depression and, to a lesser extent, the Galaxias Fossae depression, should be kept in mind when looking for habitats on Mars.

Gro Pedersen, a volcanologist at the University of Iceland who was not involved with the study, agrees that the depressions are promising sites for future research.

“These features do really resemble ice cauldrons known from Earth, and just from that perspective they should be of great interest,” Pedersen said. “Both because their existence may provide information on the properties of subsurface material — the potential existence of ice — and because of the potential for revealing ice-volcano interactions.”

The research was supported by a NASA Mars Data Analysis Program award.