AUSTIN, Texas — Researchers with The University of Texas at Austin have found that incorporating snow data collected from space into computer climate models can significantly improve seasonal temperature predictions.

The findings, published in November in Geophysical Research Letters, a publication of the American Geophysical Union, could help farmers, water providers, power companies and others that use seasonal climate predictions – forecasts of conditions months in the future – to make decisions. Snow influences the amount of heat that is absorbed by the ground and the amount of water available for evaporation into the atmosphere, which plays an important role in influencing regional climate. 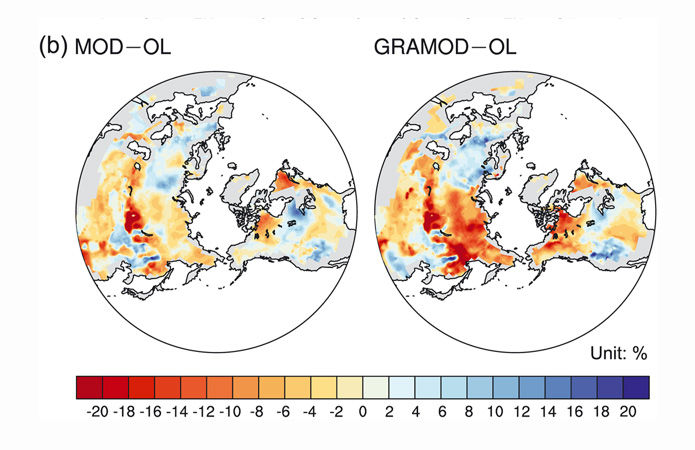 A graphic from a study led by The University of Texas at Austin shows how snow data from NASA satellites impacts seasonal temperature prediction. The negative values represented by warm colors indicate regions where temperature predictions improved and show the percentage by which errors were reduced. The graphics show the prediction results made with data from the satellites MODIS (MOD), and MODIS and GRACE (GRAMOD) against a prediction that did not incorporate snow satellite data. Peirong Lin, UT Austin Jackson School of Geosciences

“We’re interested in providing more accurate climate forecasts because the seasonal timescale is quite important for water resource management and people who are interested in next season’s weather,” said Peirong Lin, the lead author of the study and a graduate student at the UT Jackson School of Geosciences.

Seasonal forecasts are influenced by factors that are significantly more difficult to account for than the variables for daily to weekly weather forecasts or long-term climate change, said Zong-Liang Yang, a co-author of the study and a professor at the Jackson School of Geosciences Department of Geological Sciences.

“Between the short and very long time scale there’s a seasonal time scale that’s a very chaotic system,” Yang said. “But there is some evidence that slowly varying surface conditions, like snow cover, will have a signature in the seasonal timescale.”

The researchers analyzed how data on snow cover and depth collected from two NASA satellites—MODIS and GRACE—affected temperature predictions of the Northern Hemisphere in a climate model. The study examined seasonal data from 2003 through 2009, so the researchers could compare the model’s predictions to recorded temperatures. The model ran predictions in three-month intervals, with January, February and March each used as starting months.

The computer model’s temperature improvement changed depending on the region and time, with the biggest improvements happening in regions where ground-based measurements are sparse such as Siberia and the Tibetan Plateau. Climatic conditions of both these areas can influence the Indian Monsoon—seasonal rains that are vital to agriculture in India, a fact that shows the far-reaching applicability of seasonal climate prediction, Yang said.

“This correlation between snow and future monsoon has been established for several decades, but here we are developing a predictive framework where you can run the model forward and get a quantity, not just a correlation,” Yang said.

In the future the researchers plan to expand their research to predict other climatic factors, such as snowfall and rainfall. For the time being, they hope that their findings can be useful to national organizations that make climate predictions, such as the U.S. National Oceanic and Atmospheric Administration and the European Forecasting Center.

Randal Koster, a scientist at NASA’s Goddard Space Flight Center who studies land-atmosphere interactions using computer models, said that the study is an example of how satellites can improve climate forecasts by providing more accurate data to inform the starting conditions of the model.

“In the future such use of satellite data will be standard,” said Koster, who was not involved with the study. “Pioneering studies like this are absolutely critical to seeing this happen.”

The research was funded by a grant from the National Natural Science Foundation of China and the Jackson School of Geosciences.