The preservation of the fossils—which include soft body parts as well as shells and bones—ranks the site among the highest quality sources of Jurassic (183 million year old) marine fossils in the world, and the only such site in North America. A paper describing the site and fossils recovered from it was published online in the journal Geology in January. 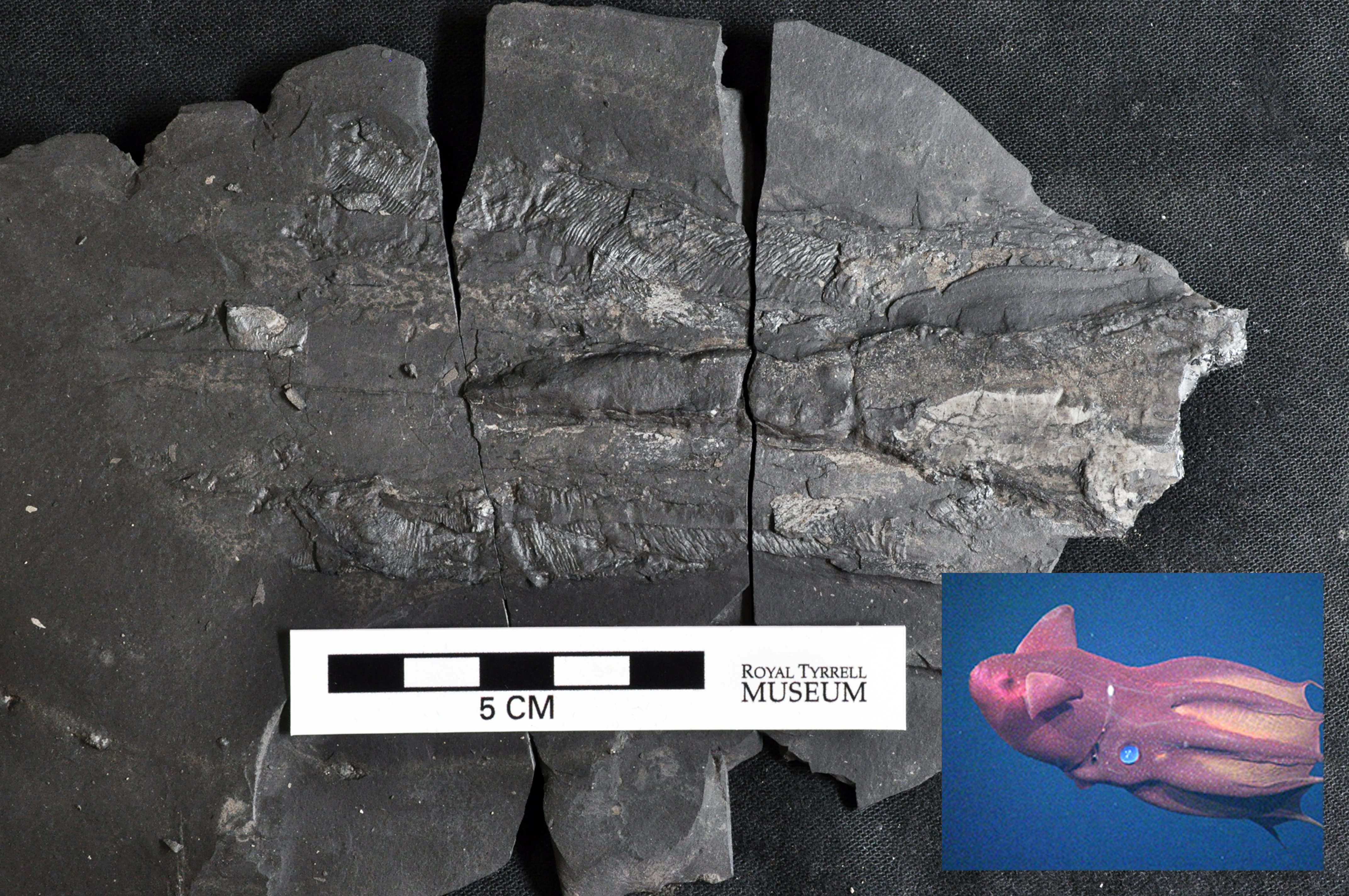 A fossilized mantle of a vampyropod, a relative to the modern vampire squid (pictured on bottom right). The ink sack is the raised structure in the fossil’s center, and muscles have a striated appearance. Rowan Martindale/The University of Texas at Austin Jackson School of Geosciences and the Monterey Bay Aquarium Research Institute.

The presence of fossilized soft tissue is especially significant because it offers a more complete view of life in ancient ecosystems and can help fill the gaps in knowledge connecting extinct organisms to those living today, said Rowan Martindale, a professor at The University of Texas at Austin’s Jackson School of Geosciences who led research on the fossils.

“In a normal fossil deposit, you only preserve a fraction of the organisms that were alive in the past. When you get an extraordinary fossil deposit with soft tissues preserved, you see significantly more of the community that would have been alive,” said Martindale, a paleontologist in the Department of Geological Sciences. “Normally, we wouldn’t find many of the animals because they lack a skeleton or have a very soft skeleton.” 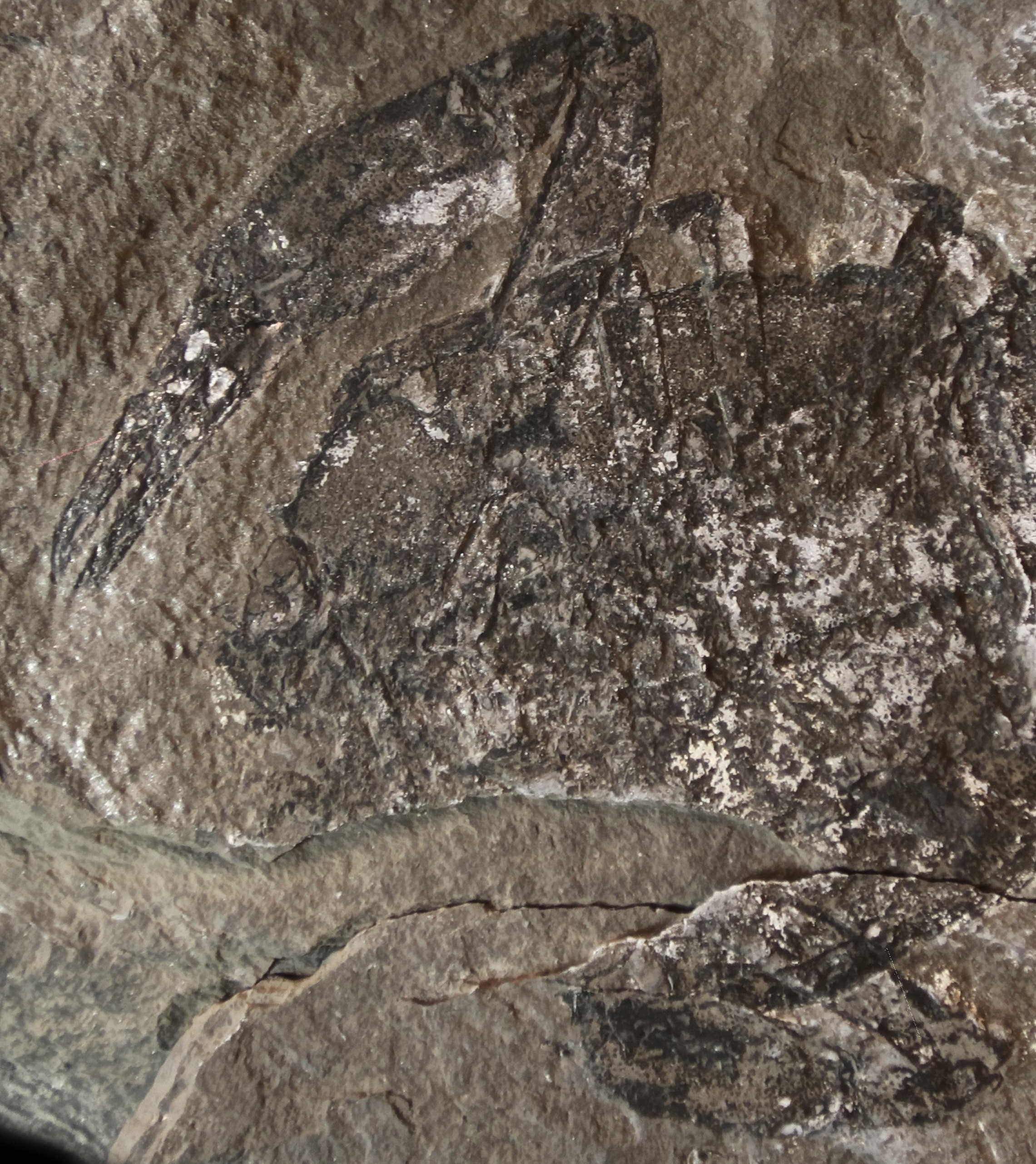 A lobster, the first fossil found by the team at Ya Ha Tinda Ranch in Alberta, Canada. Rowan Martindale/The University of Texas at Austin Jackson School of Geosciences.

The new site was found on the Parks Canada Ya Ha Tinda Ranch near Banff National Park in southwest Alberta. Co-author Benjamin Gill, a professor at Virginia Tech, spotted the first exceptional fossil when he noticed his Ph.D. student and co-author, Theodore Them, standing right on top of a lobster.

“The lighting was just right to make out the outline of the lobster,” Gill said. “Then we looked around and noticed fossils all around us.”

The lobster was the first sign the site could be special because lobsters’ flexible exoskeletons usually aren’t preserved as fossils. Other unusual fossils recovered from the site include delicate shrimp, complete fish skeletons with scales and gills, large dolphin-like marine reptiles called ichthyosaurs, as well as “vampyropods” (related to modern vampire squid and octopus) with their delicate ink sacks still intact. 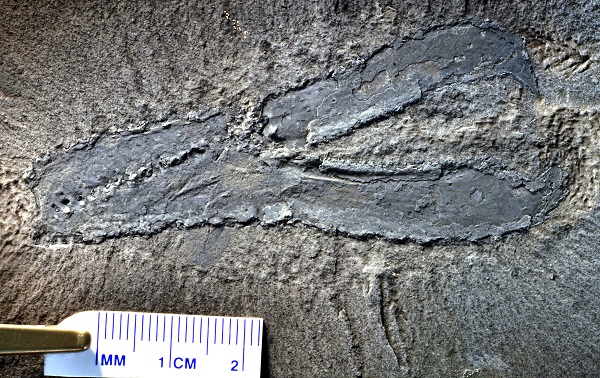 A lobster claw that may have come from an unknown species. Rowan Martindale/The University of Texas at Austin Jackson School of Geosciences.

The presence of many well-preserved, soft-bodied animals marks the new site as a “Konservat-Lagerstätte,” a term for fossil beds that preserve an array of organisms with soft tissues as well as hard ones. These sites are rare. There are only three other sites, all located in Europe, that are known to contain fossils from the Early Jurassic like the Ya Ha Tinda site. Another famous example of a Canadian Lagerstätte is the Burgess Shale, which preserves a community of soft tissue organisms from the Cambrian Explosion (540 million years ago), named for the burst of animal diversity that appears in the fossil record from this time.

The new site is about 183 million years old, meaning the fossilized life was alive during the Early Jurassic. At this time, Ya Ha Tinda and the similarly aged European sites were on opposite sides of an ancient continent that became modern-day North America and parts of Europe. Having an array of well-preserved fossils from marine ecosystems on opposite sides of the continent will help scientists understand the distribution of sea life millions of years ago.

“This is the first time we have a site like this outside of Europe, so the Ya Ha Tinda fossilized community will give us a unique snapshot of life in the Early Jurassic Panthalassa Ocean,” Martindale said. 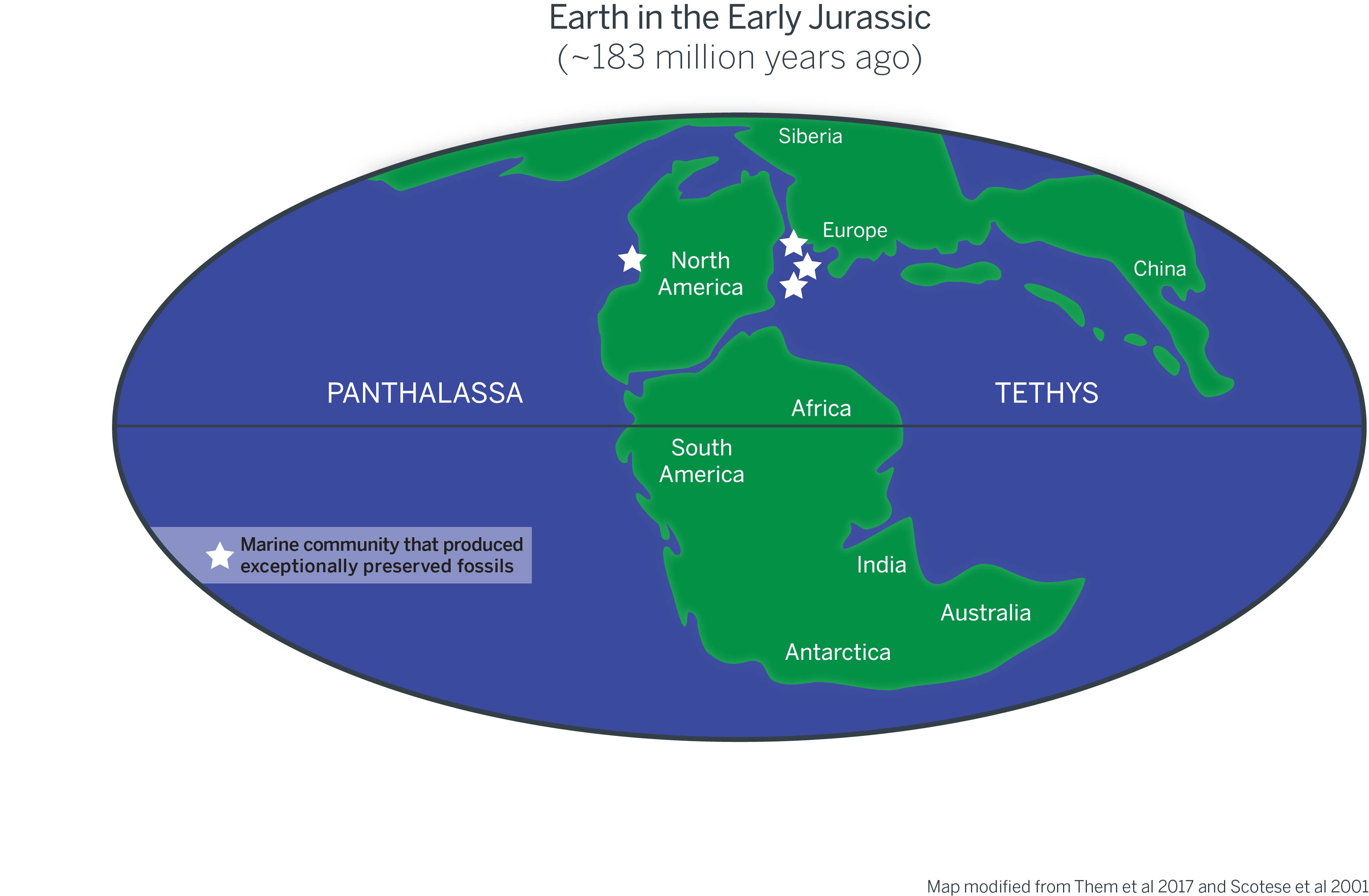 A newly discovered exceptional fossil site in North America gives a new look into marine communities from the Early Jurassic. All other known sites from that time period are in Europe. Rowan Martindale and Laura Martin/The University of Texas at Austin Jackson School of Geosciences.

The researchers have been visiting the site every summer since 2013 and have recovered dozens of fossils, including some that are probably newly discovered species. Notable specimens include a lobster with bulky arms capped with diminutive, scissor-like claws, and 16 new vampyropod specimens, a number that Gill estimates increases known diversity of specimens from North America by threefold.

The next step of the research is to investigate how so many diverse organisms were fossilized together. Researchers think that the high-quality preservation is related to a widespread extinction of marine life caused by a period of extremely low levels of oxygen in parts of the Jurassic oceans. Free of most scavengers, these low oxygen areas could have been an ideal place for a carcass to lay undisturbed and become beautifully fossilized.

“If a carcass sinks into anoxic water, you’re more likely to get the conditions that will favor the preservation of soft tissues, feathers and articulated skeletons,” Martindale said. “These ‘fossil jackpots’ are really special.”

The research was supported by the National Science Foundation and a research seed grant from the Jackson School of Geosciences.