AUSTIN, Texas — About 80 million years ago, a group of bees began exhibiting social behavior, which includes raising young together, sharing food resources and defending their colony. Today, their descendants—honey bees, stingless bees and bumble bees—carry stowaways from their ancient ancestors: five species of gut bacteria that have evolved along with the host bees.

These bacteria, living in the guts of social bees, have been passed from generation to generation for 80 million years, according to a new study published today in the journal Science Advances and led by researchers at The University of Texas at Austin. The finding adds to the case that social creatures, like bees and humans, not only transfer bacteria among one another in their own lifetime—they have a distinctive relationship with bacteria over time, in some cases even evolving on parallel tracks as species.

“The fact that these bacteria have been with the bees for so long says that they are a key part of the biology of social bees,” says Nancy Moran, a professor of integrative biology at the university who co-led the research with postdoctoral researcher Waldan Kwong. “And it suggests that disrupting the microbiome, through antibiotics or other kinds of stress, could cause health problems.”

“Having a social lifestyle enabled the specialized community of bacteria to diversify along with the bees through deep time,” says Moran.

According to this new study, the last common ancestor of modern social bees picked up five species of bacteria from the environment around 80 million years ago. Those bacteria survived and evolved inside the guts of the host bees for millions of years, diversifying into strains that are specific to each new species of social bee that evolved since then. Those five ancient bacterial lineages still form a major part of the gut microbiota of honey bees and bumble bees, but less so in stingless bees, which were more likely to lose bacterial lineages over time. 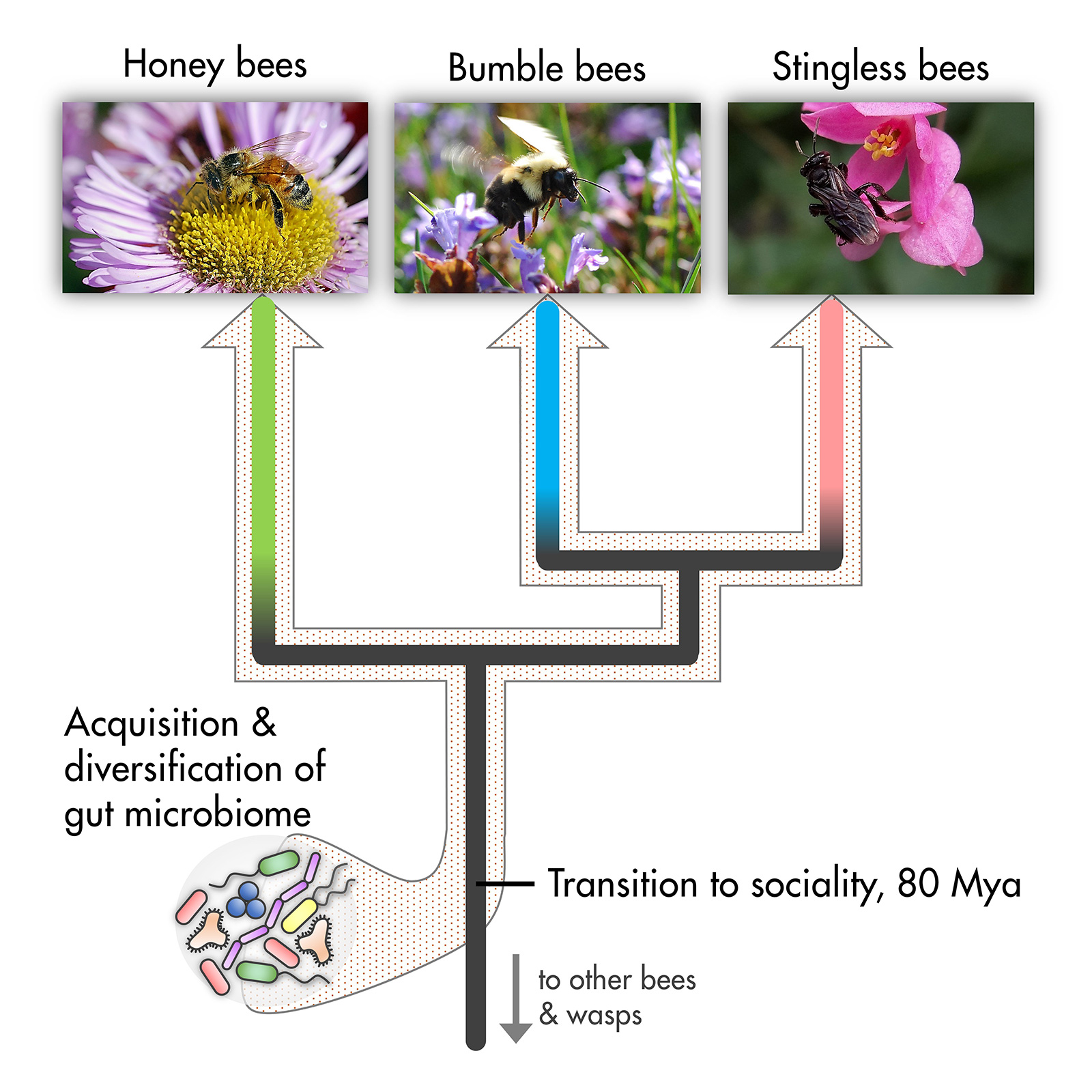 Bees may have acquired their core microbiota around the same time as the transition to social lifestyles. Closely related bees have more similar microbiomes, suggesting co-diversification of host bees and their microbes.Waldan K. Kwong and John. S. Ascher

Just as these five species of bacteria seem to be indispensable to their bee hosts, they too can’t live without their hosts. By adapting to life inside bees, they’ve lost their ability to live in the outside world. For example, the bee gut has lower oxygen levels than the atmosphere has.

“Most of them can’t live under atmospheric oxygen levels,” says Moran. “They can’t just grow in nectar or on the surface of a plant. They have to be in the bee gut.”

This is the first study to chart the evolution of the gut community of bacteria in a group of animal hosts so far back in time. Until now, the study that spanned the longest evolution of gut microbiota, led by another UT Austin professor of integrative biology, Howard Ochman, traced three lineages of bacteria living continuously in hominids back about 15 million years.

There are hundreds of species and three main groups of social bees living today. The honey bees include the domesticated western honey bee, Apis mellifera, which has been spread around the world by humans for honey production and pollination of crops, and some cousins living in Asia and Australia. Stingless bees live in tropical and subtropical regions of the Americas, Southeast Asia, Australia and Africa. Bumble bees live mostly in northern temperate climates of the Americas and Eurasia.

Kwong, who is now a postdoctoral researcher at the University of British Columbia, travelled around Asia to collect bees for the project. He isolated gut bacteria from 27 bee species (25 social and 2 nonsocial species) and sequenced DNA from the bees’ entire gut microbiomes. For each major species of bacteria, the team built a phylogeny, or evolutionary family tree, that showed how the species branched off into distinct strains.

And here is the remarkable thing: If you were to set one of these bacterial family trees—for example, the tree for the variety of Lactobacillus associated with bees—next to the family tree of social bees, they would look strikingly similar. When a new species of bee branches off from its cousins, a new strain of the bacterial species often branches off from its cousins. The end result of this co-speciation is that for the hundreds of species of social bee alive today, each has its own unique strains of shared species of bacteria.

Scientists refer to a species that can’t live on its own without its host—such as these ancient microbes that have specialized to live only in the guts of certain bees—as a symbiont.