Almost a decade ago, the ground around the densely populated Dallas-Fort Worth Metroplex started shaking. As the frequency and intensity of earthquakes increased in a region poorly prepared for the seismic activity, the risk became a priority for the state.

“We’ve always had natural earthquake activity in Texas throughout its history. But as earthquakes started to happen more to our good neighbor to the north in Oklahoma, Texas had some more of its own. Irving, Texas. Azle, Texas. Venus, Texas. All in the greater Dallas-Fort Worth area, which got people’s attention,” says Scott W. Tinker, director at the Bureau of Economic Geology in the Jackson School of Geosciences at The University of Texas at Austin.

Residents, politicians and oil-gas industry leaders reached out to the Bureau of Economic Geology.

The bureau is the oldest and second largest research unit at the university, made up of more than 250 scientists, engineers and economists. The organization also functions as the State Geological Survey of Texas — a broker of information among industry, academia and government agencies.

“Between 1980 and about 2010 there were one to two earthquakes per year in the entire state. Between 2010 and 2015 that rate of seismicity changed to up to 15 small earthquakes per year,” says Peter Hennings, a veteran of the petroleum industry and now a co-principal investigator at the Center for Integrated Seismicity Research (CISR), an earthquake research center managed by the bureau.

The number of earthquakes continues to rise, with 28 earthquakes recorded in Texas in 2016.

“Everybody wants to know what is going on. What has changed? And what can be done about it?” says Hennings. 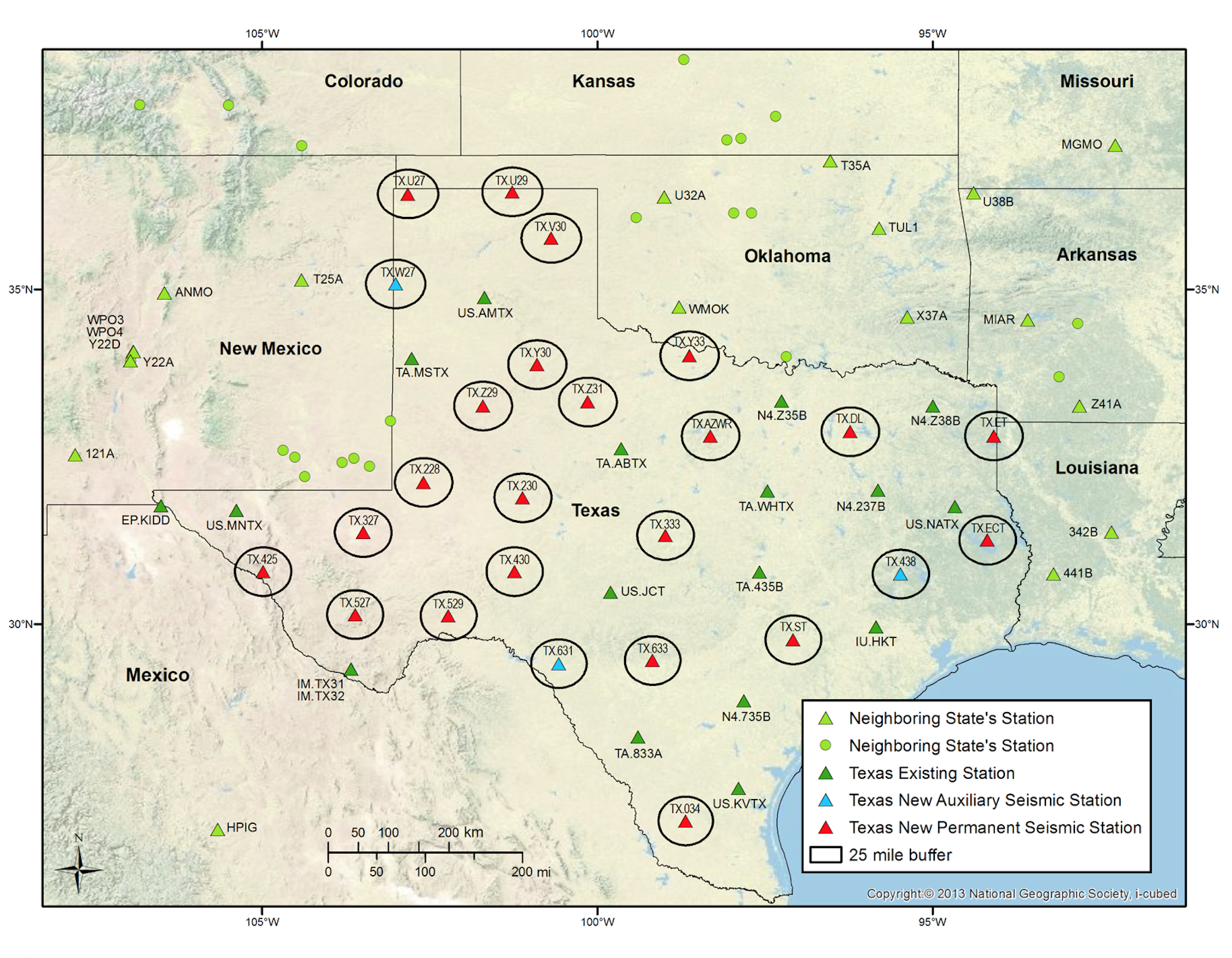 TexNet plans to install at least 22 new permanent and an additional 36 portable stations evenly spaced across Texas. Image courtesy of the Bureau of Economic Geology.

“TexNet is an array of seismometers across Texas that helps us better locate and identify earthquakes, but also measure the levels of ground shaking from these events,” says Ellen Rathje, who is also a co-principal investigator at CISR and a professor of civil engineering at UT Austin’s Cockrell School of Engineering.

TexNet plans to install at least 22 new permanent stations evenly spaced across Texas. These earthquake monitors are called “TexNet’s seismic backbone,” and an additional 36 portable stations will be placed in areas of recent earthquake activity.

As of March 2017, the TexNet team is a little more than half way through their goal. They have installed 14 permanent stations and 18 portable stations, collecting live seismic activity across the state, with 11 of those portable stations in the Dallas-Fort Worth area.

Each of these sensors streams data in real time back to the Bureau of Economic Geology. The data give the researchers the ability to understand when and where the seismicity is occurring. “This research is developing fundamental understanding of the processes that cause earthquakes and how they impact people, their infrastructure and their businesses,” says Rathje.

A big part of the TexNet project is partnering with landowners across the state.

“We have some seismic equipment that sits at the front of the property,” says David Andrews, a landowner from Azle, 16 miles northwest of Fort Worth. “There are a lot of questions that people have at the moment with no way of answering. It’s easy to just say it’s the fracking and it’s the injecting, but this is without any real proof.”

Oil and gas have been important parts of Texas history for over a century, and connections have been proposed between earthquakes and drilling since the 1920s. But, says Tinker, “Just because we’re doing something here and an earthquake happens nearby at the same time doesn’t mean that caused that necessarily; but it could have. If human activity is causing the earthquakes, we need to figure out how to stop that.”

Alexandros Savvaidis, who is TexNet project manager, has made a career of operating similar seismic systems in Greece and other parts of Europe. Planning the best locations for the monitors has been challenging, given Texas’ size. 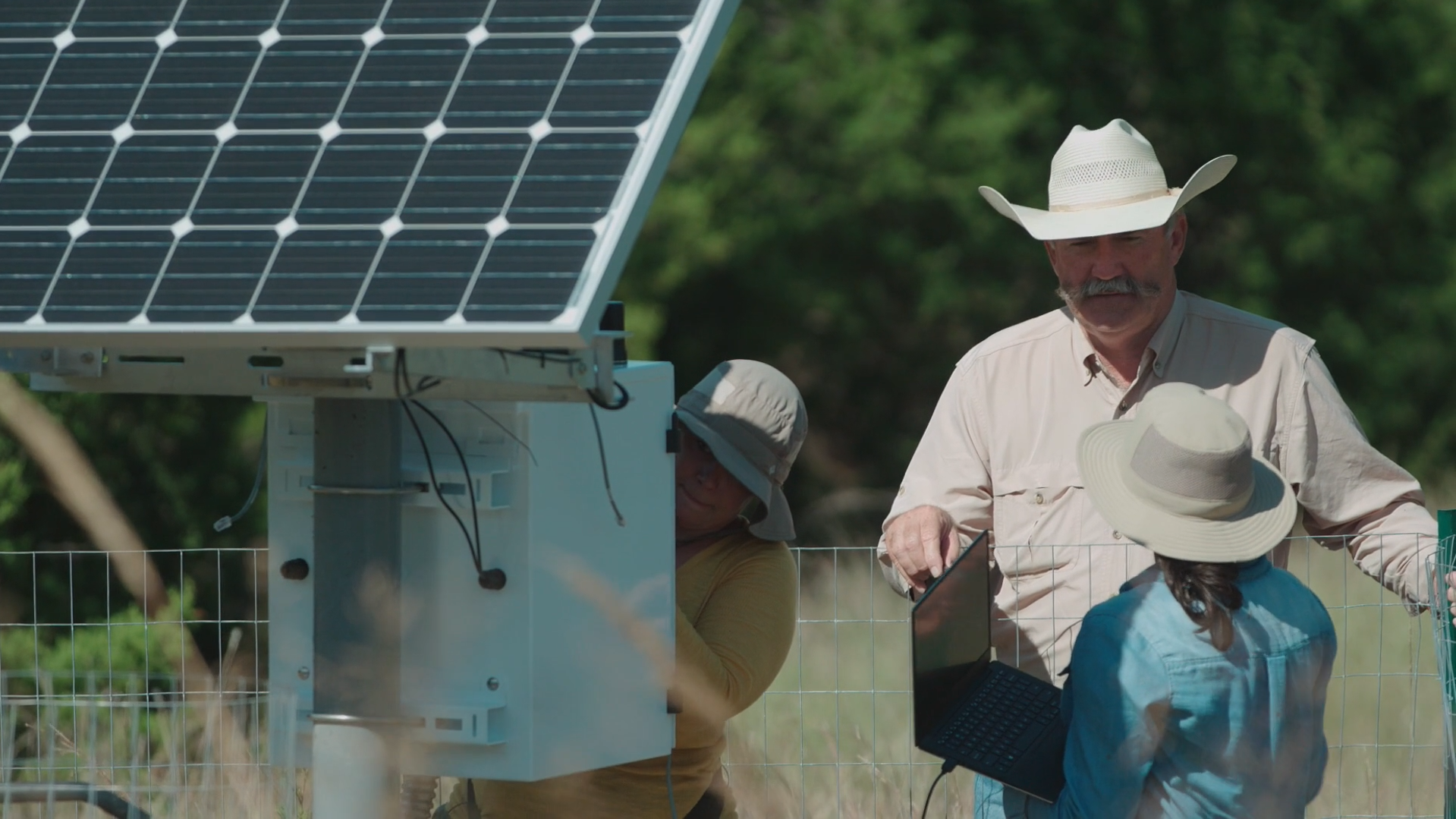 Larry Walden (right), a county commissioner in Parker County, west of Fort Worth works with the TexNet team to install a seismic monitor in his county. “This has been a big issue for us. The state is big. The ranches are big,” said Alexandros Savvaidis, TexNet project manager. “What is important from our side is that we work proactively in the state in order to provide the necessary information to protect the public and the industrial infrastructure.”

“This has been a big issue for us. The state is big. The ranches are big,” he said. “What is important from our side is that we work proactively in the state in order to provide the necessary information to protect the public and the industrial infrastructure.” Working closely with the communities has been key, and he’s confident the work will pay off soon.

“We were contacted by The University of Texas, and they requested that we help them find a location for the monitor,” said Larry Walden, a county commissioner in Parker County, west of Fort Worth. He was happy to help. “What we continued to hear from the citizens was: Who’s doing something about it? Those people were concerned because they thought that the next one was going to be a big one.”

“We have to make sure that we have a good understanding of the risk of earthquakes and provide that to the public,” says Savvaidis. “Texas will be prepared in case of an earthquake event.”

TexNet hopes to serve as an example on the state, national and international levels for other communities facing these problems.

“This is tough science. It takes smart people from multiple disciplines working together to do this,” says Tinker. “We are working with our colleagues at Southern Methodist University, who have been studying seismicity for many decades now, and at Texas A&M. So, it’s an integrated approach to answer this question. The state, universities, industry and landowners are all working together to address the science of this issue, and this is exactly how it will get solved.”