AUSTIN, Texas — Researchers at The University of Texas at Austin have identified glaciers in West Greenland that are most susceptible to thinning in the coming decades by analyzing how they’re shaped. The research could help predict how much the Greenland Ice Sheet will contribute to future sea-level rise during the next century, a number that currently ranges from inches to feet.

Scientists at The University of Texas Institute for Geophysics (UTIG) led the study, which was published in Nature Geoscience on April 17.

“There are glaciers that popped up in our study that flew under the radar until now,” said lead author Denis Felikson, a graduate research assistant at UTIG and a Ph.D. student in the Department of Aerospace Engineering and Engineering Mechanics. UTIG is a research unit of the UT Jackson School of Geosciences. 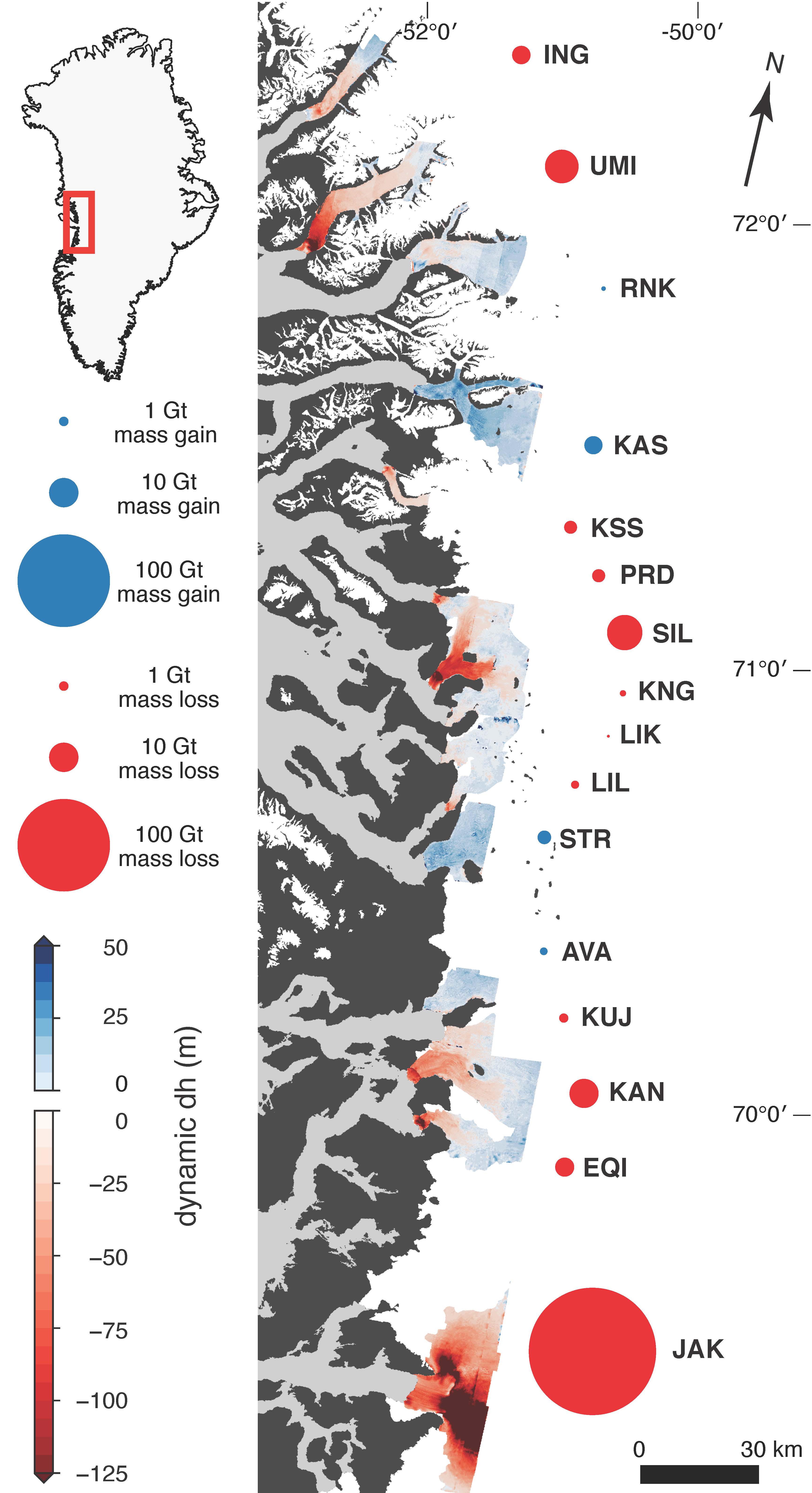 A graphic showing the surface elevation change and mass loss of glaciers in Greenland from 1985–present. Labels pertain to glacier names listed in the research paper. The circle areas show mass gain (blue) or loss (red). Ice is in white, ocean in light gray, and bedrock in dark gray. Denis Felikson

The Greenland Ice Sheet is the second-largest ice sheet on Earth and has been losing mass for decades, a trend scientists have linked to a warming climate. However, the mass change experienced by individual coastal glaciers, which flow out from the ice sheet into the ocean, is highly variable. This makes predicting the impact on future sea-level rise difficult.

“We were looking for a way to explain why this variability exists, and we found a way to do it that has never been applied before on this scale,” Felikson said.

Of the 16 glaciers researchers investigated in West Greenland, the study found four that are the most susceptible to thinning: Rink Isbræ, Umiamako Isbræ, Jakobshavn Isbræ and Sermeq Silardleq.

Umiamako Isbræ, Sermeq Silardleq and Jakobshavn are already losing mass, with Jakobshavn being responsible for more than 81 percent of West Greenland’s total mass loss during the past 30 years.

Rink has remained stable since 1985, but through shape analysis researchers found that it could start to thin if its terminus, the front of the glacier exposed to ocean water, becomes unstable. This is a strong possibility as the climate continues to warm.

“Not long ago we didn’t even know how much ice Greenland was losing. Now we’re getting down to the critical details that control its behavior,” said Tom Wagner, director of NASA’s cryosphere program, which sponsored the research.

The analysis works by calculating how far inland thinning that starts at the terminus of each glacier is likely to extend. Glaciers with thinning that reaches far inland are the most susceptible to ice mass loss.

Just how susceptible a glacier is to thinning depends on its thickness and surface slope, features that are influenced by the landscape under the glacier. In general, thinning spreads more easily across thick and flat glaciers and is hindered by thin and steep portions of glaciers.

The research revealed that most glaciers are susceptible to thinning between 10 and 30 miles inland. For Jakobshavn, however, the risk of thinning reaches over 150 miles inland—almost one-third of the way across the Greenland Ice Sheet.

Felikson said these calculations will help improve estimates on how much Greenland can contribute to future sea-level rise. However, while the method can point out vulnerable areas, it can’t predict how much mass loss is likely to occur. 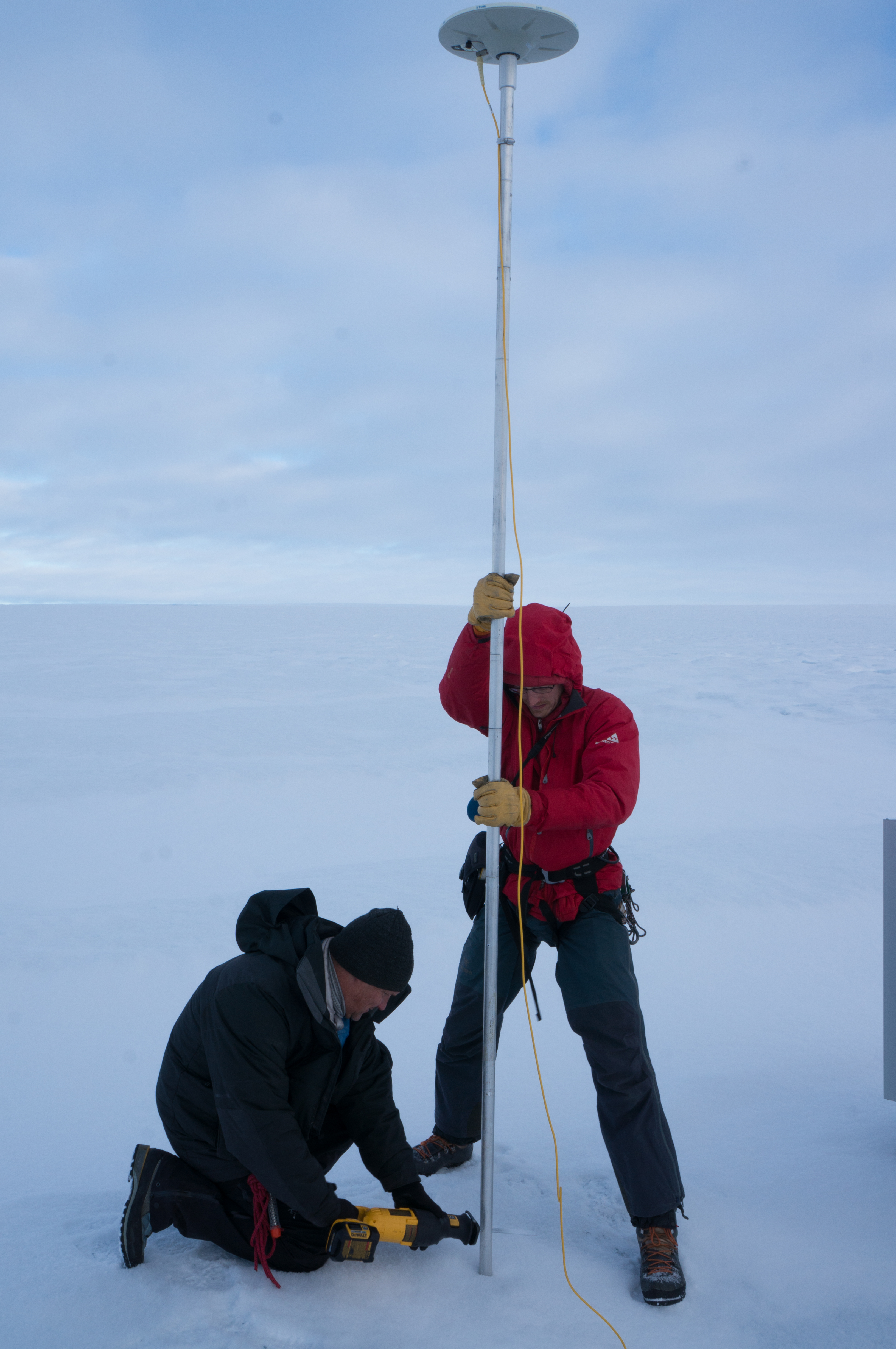 Still, knowing which glaciers are the most at risk can help scientists allocate limited resources, said co-author Timothy Bartholomaus, an assistant professor at the University of Idaho and former research associate at UTIG.

“The approach we demonstrate here allows us to identify which outlet glaciers are not yet changing rapidly, but might,” Bartholomaus said. “With that knowledge, we can anticipate potential sea-level rise and set up the observational campaigns in advance to understand these glacier changes.”

Ginny Catania, an associate professor in the Jackson School and research scientist at UTIG, said the group has plans to apply the shape analysis technique to other glaciers.

“Our plan is to extend the analysis so that we can identify glaciers in Antarctica and around the rest of Greenland that are most likely to be susceptible to change in the future,” she said.