AUSTIN, Texas – The Harry Ransom Center at The University of Texas at Austin has obtained the archive of British-Irish theatre and film actor Peter O’Toole (1932–2013). 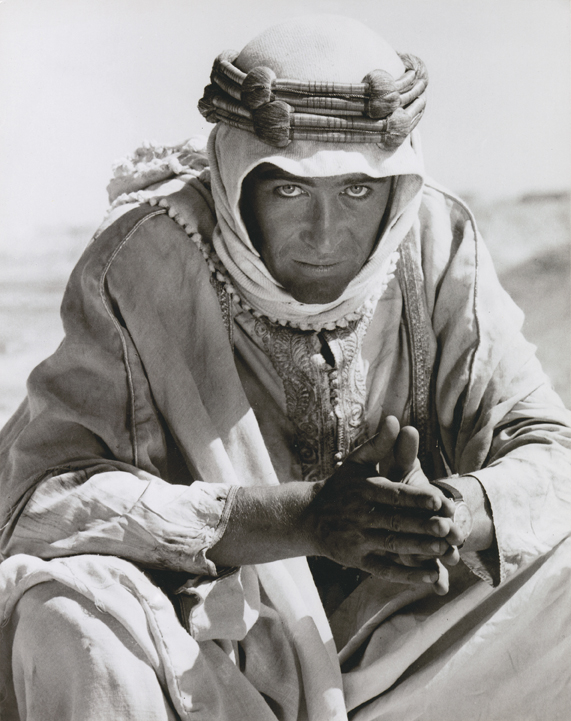 Studio photo of Peter O’Toole in the 1962 film Lawrence of Arabia. Unknown photographer.

The extensive archive contains theatre and film scripts along with O’Toole’s writings, including drafts, notes and working material for his multivolume memoir “Loitering with Intent.”

“It is with a respect for the past and an eye to the future that I recognize the importance of making my father’s archive accessible and preserving it for future generations,” said Kate O’Toole. “Thanks to the nature of film, my father’s work has already been immortalized. The Ransom Center now provides a world-class home for the private thoughts, conversations, notes and stories that illuminate such a long and distinguished career.”

The collection is rich with correspondence that offers insight into the relationships and workings of the theatre and film communities of which he was a part. Correspondents include Michael Blakemore, Marlon Brando, Michael Caine, John Gielgud, Peter Hall, Katharine Hepburn, Dustin Hoffman, Jeremy Irons, Spike Milligan, Paul Newman, Trevor Nunn, Laurence Olivier, Harold Pinter and Kevin Spacey, among many others.

The archive includes a rich photographic record documenting all periods of O’Toole’s personal and professional life. These include diaries and notebooks, theatre and film programs and memorabilia, audio recordings of his rehearsing lines and reciting poetry, awards, and a selection of iconic props and costume pieces, including his sword from the National Theatre’s inaugural production of “Hamlet” directed by Laurence Olivier.

“Peter O’Toole was one of the most talented actors of stage and screen on either side of the Atlantic,” said Eric Colleary, Cline Curator of Theatre and Performing Arts at the Ransom Center. “People might be surprised to see his incredible talent with words in performance extended to dozens of published and unpublished writing projects represented in the archives. He was a brilliant writer, and his two published memoirs aside, this is an aspect of Peter O’Toole the world hasn’t yet seen.”

O’Toole began his career in theatre as a student at the Royal Academy of Dramatic Art from 1952 to 1954. He received early recognition as an actor with the Bristol Old Vic, the Royal Shakespeare Company and the National Theatre. His success in David Lean’s 1962 film “Lawrence of Arabia” made him a household name.

The O’Toole archive will also allow researchers and artists to interpret the entirety of his complex life and multifaceted career.

The materials join other collections at the Ransom Center that document the works of stage and screen performers, including Stella Adler; Robert De Niro; Edith Evans; Anne Jackson; George Bernard Shaw; Eli Wallach; Donald Wolfit, who appeared alongside O’Toole in several of his films; and strong holdings of British stage actors Henry Irving and Edmund Kean, whose life and works O’Toole studied and admired. The Ransom Center also holds a collection of T. E. Lawrence materials.

O’Toole is among that elite group of distinguished British actors honored with a memorial plaque in St. Paul’s Church, “the actors’ church,” in London’s Covent Garden.

The archive will be accessible once processed and cataloged.