AUSTIN, Texas — Hundreds of built and proposed hydroelectric dams may significantly harm life in and around the Amazon by trapping the flow of rich nutrients and modifying the climate from Central America to the Gulf of Mexico. These findings, published in Nature, emerge from a multidisciplinary, international collaboration of researchers from 10 universities, led by scientists at The University of Texas at Austin.

To meet energy needs, economic developers in South America have proposed 428 hydroelectric dams, with 140 currently built or under construction, in the Amazon basin — the largest and most complex network of river channels in the world, which sustains the highest biodiversity on Earth. The rivers and surrounding forests are the source of 20 percent of the planet’s fresh water and valuable ingredients used in modern medicine. 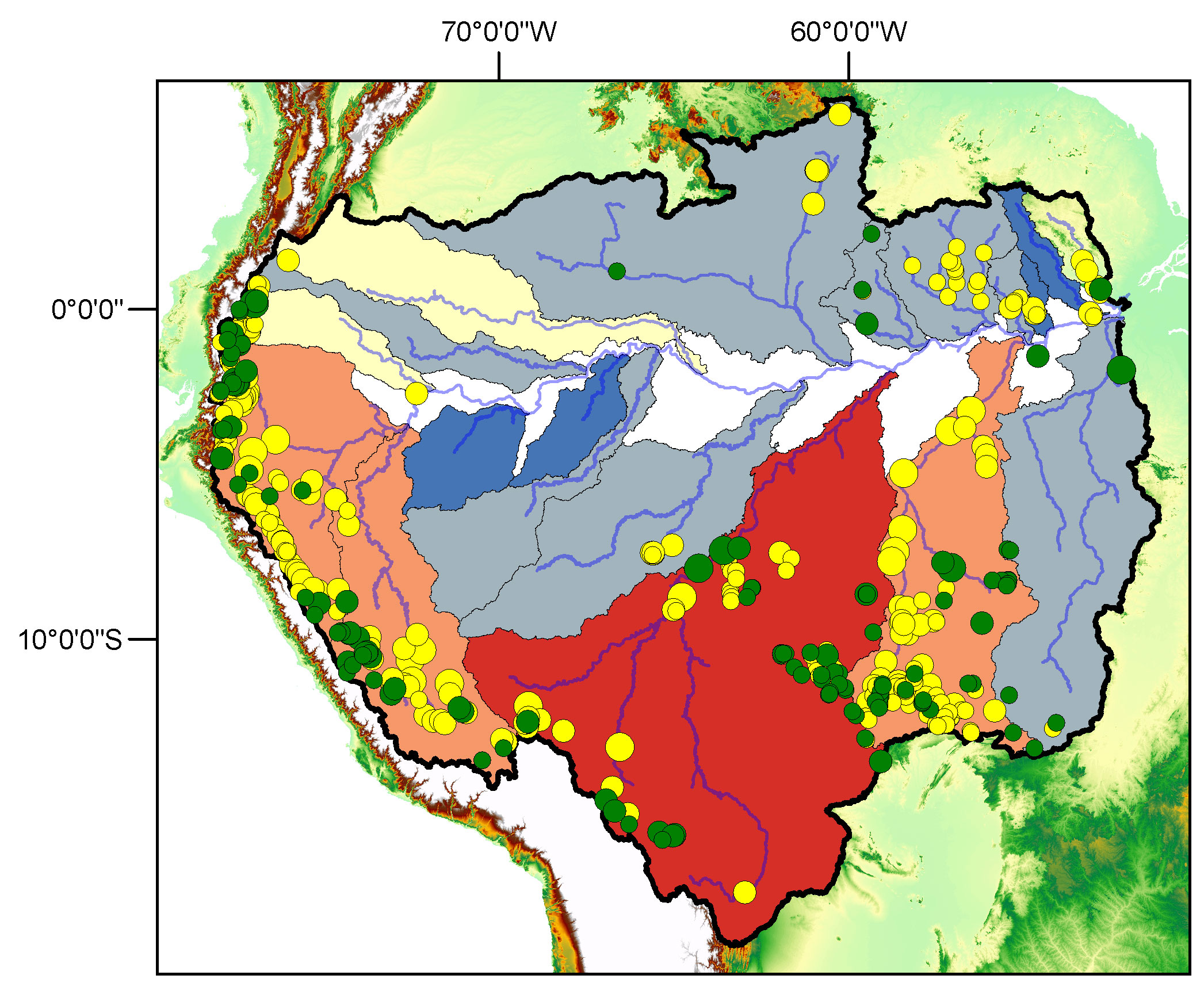 Map depicting the Amazon’s 19 sub-basins and the existing or under construction (green) and planned (yellow) hydroelectric dams. Illustration by Edgardo Latrubesse.

While these hydroelectric dams have been justified for providing renewable energy and avoiding carbon emissions, little attention has been paid to the major disturbances dams present to the Amazon floodplains, rainforests, the northeast coast of South America and the regional climate, the researchers said.

Rivers in the Amazon basin move like a dance, exchanging sediments across continental distances to deliver nutrients to “a mosaic of wetlands,” said Edgardo Latrubesse, UT Austin geography and the environment professor and lead author of the study. Sediment transported by rivers provides nutrients that sustain wildlife, contribute to the regional food supplies and modulate river dynamics that result in high habitat and biotic diversity for both aquatic and nonaquatic organisms.

“People say ‘oh another dam, another river.’ It’s not. It’s the Amazon,” said Latrubesse, who is a faculty affiliate of the Teresa Lozano Long Institute of Latin American Studies. “We have to put the risks on the table and change the way people are looking at the problem. We are massively destroying our natural resources, and time urges us to find some rational alternatives for preservation and sustainable development.”

In the study, Latrubesse and collaborators introduced the Dam Environmental Vulnerability Index (DEVI), which was developed to determine the current and potential impacts of dams on rivers and their ecosystems in the Amazon basin. DEVI values quantify on a scale of 0 to 100 an area’s vulnerability to potential land use change, erosion, runoff pollution, trapped sediment and overall changes to river systems due to dams.

“To not have an integrated approach is to deny how nature works in the Amazon basin,” said Victor Baker, University of Arizona Regents’ Professor of Hydrology and Atmospheric Sciences and co-author of the study.” Our role is to show how nature works and that nature is integrated.” 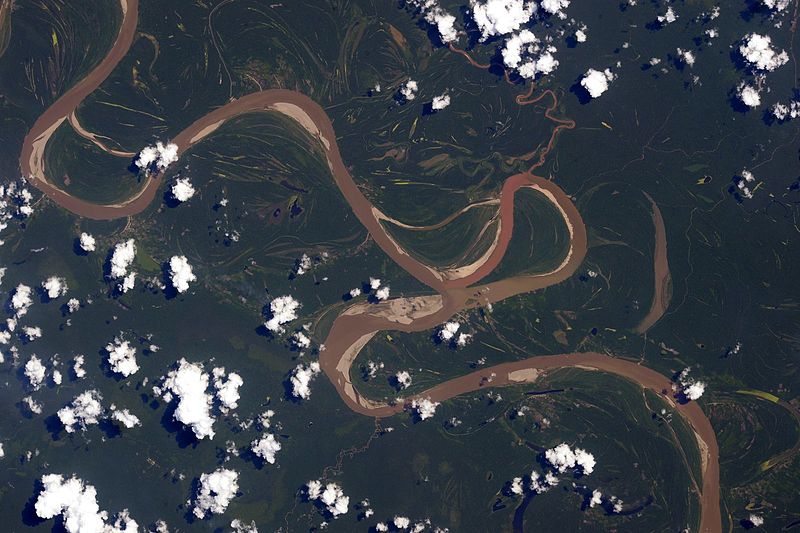 Satellite image of the Ucayali River, one of the Amazon’s 19 major tributaries, flowing through Peru. Photo by Kjell Lindren, NASA.

Researchers found that many of the existing dams are located in areas of high sediment yield, such as the Andean Cordillera, which provides more than 90 percent of the detrital sediment to the entire system.

The Marañon and Ucayali rivers are the most vulnerable in this area (DEVI of 72 and 61, respectively), with 104 and 47 dams planned or constructed dams on each river, respectively. The researchers estimated 68 to 80 percent of the area upstream of the lowermost planned dam in these rivers will remain unprotected from dam influence, modifying the rivers’ dynamics, altering the creation of oxbow lakes and branches, decreasing floods and floodplain sediment storage, and putting thousands of species of birds, fish and trees at risk. 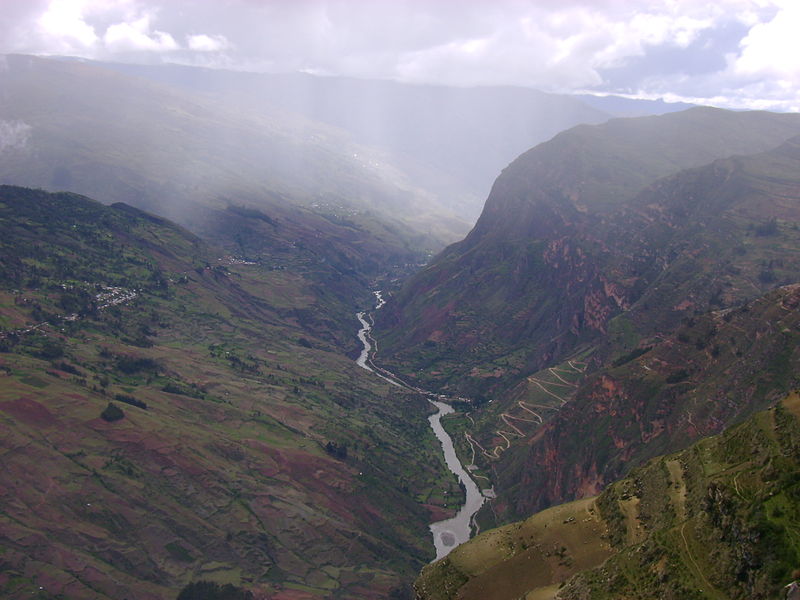 The Marañon River flows through Peru in a deeply eroded Andean valley. Photo by Gato Montes.

The Madeira River, which accounts for about half of the Amazon River system’s total sediment transported from Bolivia and Peru and is home to the most diverse fish population in the Amazon, has the highest DEVI values (greater than 80) and faces extreme risks of potential land use change, erosion, runoff pollution and trapped sediment. Here, two huge dams were recently constructed, the Santo Antônio and Jiaru dams, which led to a 20 percent decrease in the average sediment concentration in the Madeira despite unusually high flood discharges in 2014 and 2015. Researchers expect a greater amount of the nutrient-rich sediment to soon be trapped by the additional trapping effect of 25 dams planned further upstream. 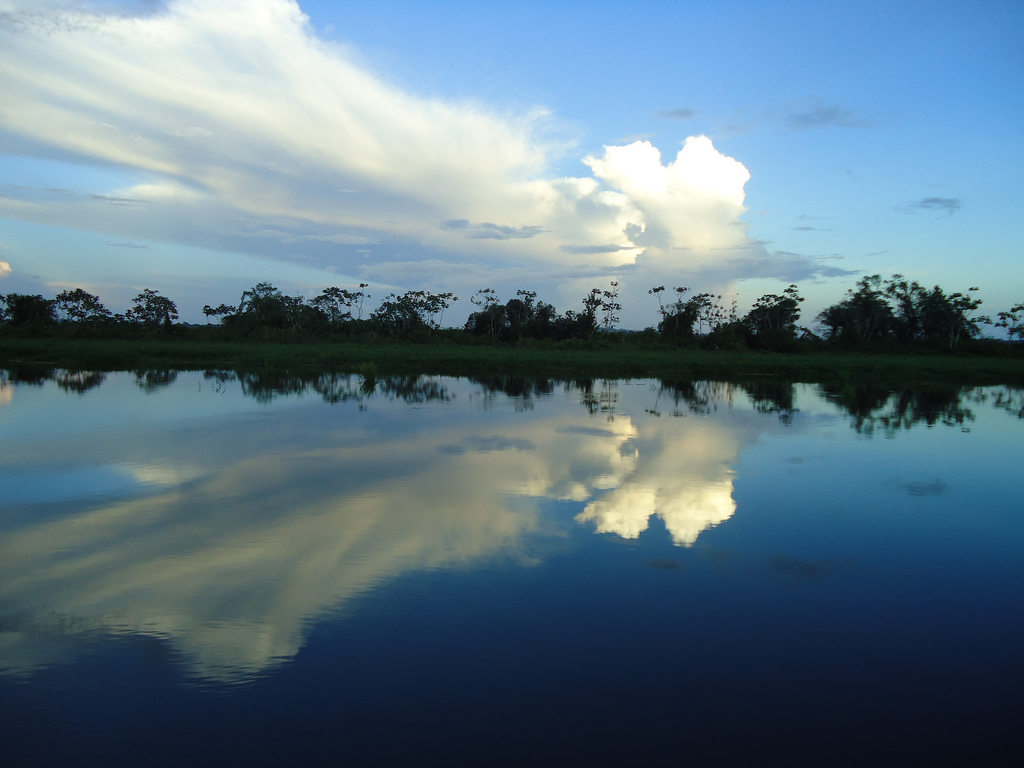 The Tapajós River is a major tributary of the Amazon located in Brazil. Photo by International Rivers.

Other large rivers in the central highlands of Brazil are also being impacted, the researchers said. Investigation of the Tapajós River — where the main riverstem has not yet been directly disrupted, but 28 dams were recently constructed in its major tributaries — showed that the river and all its major tributaries will be impounded if developers move forward with 90 proposed dams and deforestation continues at its current rate.

“Think about putting dams in the Mississippi connecting artificial lakes from Memphis to New Orleans,” Latrubesse said. “It would be a scandal because it wouldn’t be sustainable. But this is what is proposed for the Tapajós River.”

Baker stressed that the Amazon is “the most important river basin on the planet. It’s a microcosm of our issues of today involving environment, energy and health of the planet.”

Amazon sediments nourish the largest preserved mangrove region of South America, along the coastline of northeast Brazil and the three Guianas, and past research has shown the sediments affect rainfall and storm patterns from the Amazon basin to Gulf of Mexico, Latrubesse said.

“The dimension of the impacts can be not only regional, but also on an interhemispheric scale,” Latrubesse said. “If all the planned dams in the basin are constructed, their cumulative effect will trigger a change in sediment flowing into the Atlantic Ocean that may hinder the regional climate.”