AUSTIN, Texas — Things are not always as they appear. New visual perception research at The University of Texas at Austin, published in the Proceedings of the National Academy of Sciences, explains the natural limits of what humans can see and how to find what nature hides. 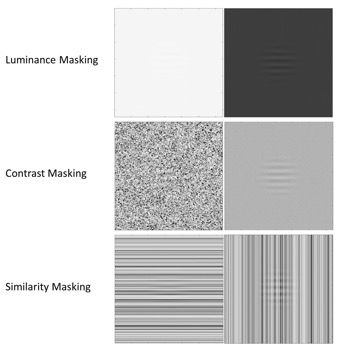 In the picture above, the same horizontal striped pattern has been added to all of the square backgrounds, yet the pattern is much harder to see on the left. These examples demonstrate the three main background properties that affect human ability to see objects: the luminance, the contrast and the similarity of the background to the orientation and shape of the object. Sebastian, S., Abrams, J. & Geisler, W. (June 26, 2017) Proc. Natl. Acad. Sci. USA.

UT Austin researchers investigated the three main background properties that affect the ability to see objects: the luminance or brightness, the contrast (the variation in luminance) and the similarity of the background to the orientation and shape of the object. Using an experimental and theoretical approach involving analysis of millions of natural images, the researchers found that the ability to detect the differences between the object and the background was predicted directly from the physics of natural stimuli.

“The discovery of highly systematic laws for perception in natural scenes — made possible by constrained statistical sampling — is a potential game changer,” said the paper’s corresponding author Wilson Geisler, a UT Austin professor of psychology and director of the Center for Perceptual Systems. “It demonstrates how to study complex real-world perception with the same level of rigor that was previously achieved only with simple synthetic stimuli.”

Their findings showed that the detrimental effects of this uncertainty can be minimized by estimating the luminance, contrast and similarity at the object’s possible locations, and then dividing the neural responses at each of these locations by the product of these estimates. The researchers found strong evidence that these computations are done automatically in the human visual system.

Knowing this may lead to improved radiology technology to help radiologists identify abnormalities in the human body; or better security imaging at airports to detect suspicious items in luggage; or enhanced camouflage design to disguise soldiers in war zones, Geisler said.

“There are many potential applications of these findings. For example, radiological images are highly complex, like the natural images that drove the evolution of the human visual system. Thus, the perceptual laws for natural images may predict when a radiologist will have difficulty detecting suspicious objects in a radiological image. These predictions could be used to alert the radiologist to locations where extra scrutiny would be advised,” Geisler said.