AUSTIN, Texas — The Harry Ransom Center at The University of Texas at Austin holds the archive of novelist Kazuo Ishiguro, the recent recipient of the Nobel Prize in literature for 2017.

Ishiguro was recognized by the Swedish Academy that awards the prize as a writer “who, in novels of great emotional force, has uncovered the abyss beneath our illusory sense of connection with the world.”

Acquired in 2015 with the support of then-university President Bill Powers and then-Provost Gregory L. Fenves, the archive provides a meticulous record of Ishiguro’s writing projects, including his seven published novels. Ishiguro kept his notes and multiple drafts for each of his novels. 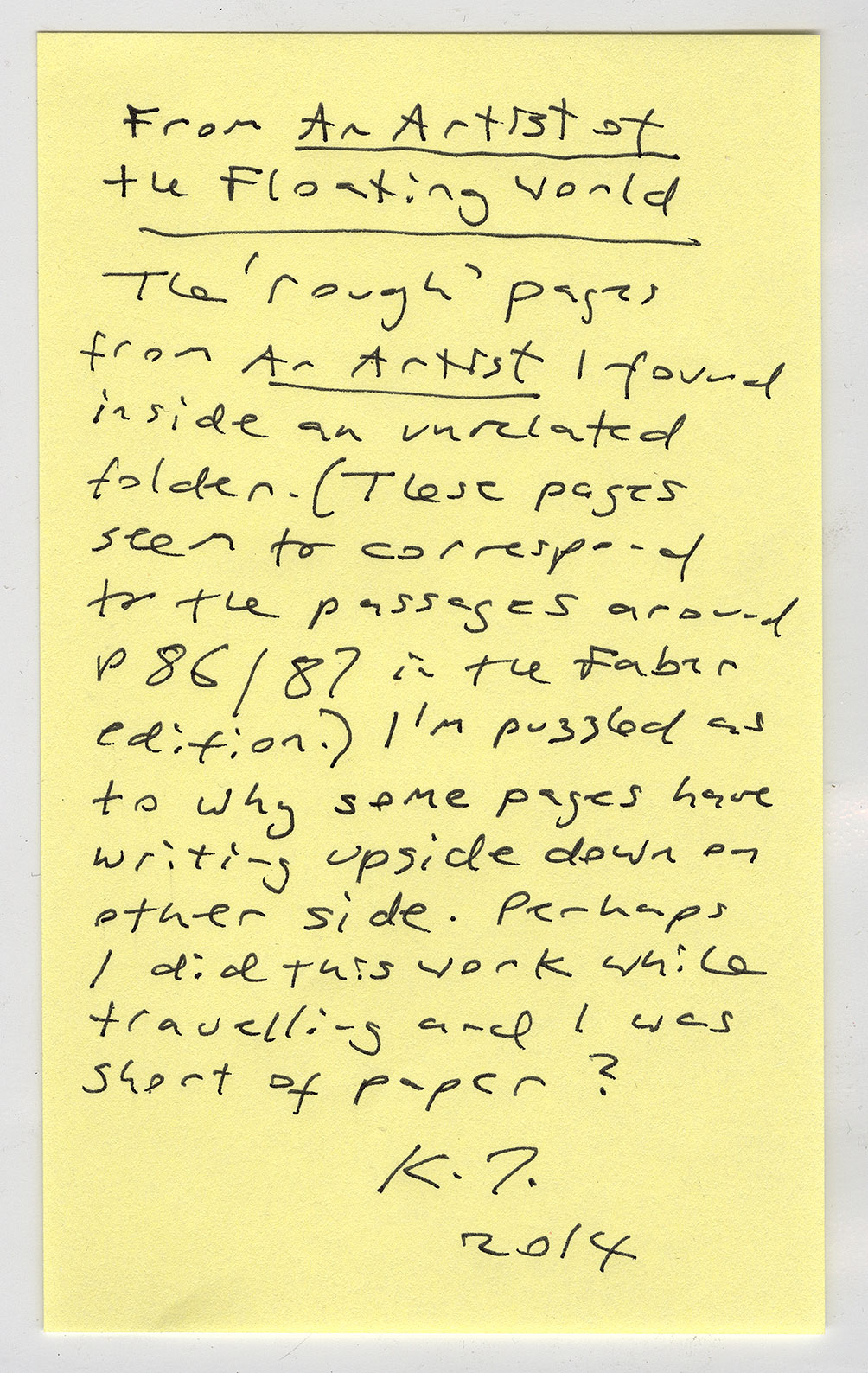 Kazuo Ishiguro’s explanatory comments for the “rough” pages for “An Artist of the Floating World.” Courtesy Harry Ransom Center.

Prior to the archive’s arrival at the Ransom Center, Ishiguro spent months organizing the materials and making substantial explanatory comments, including a document he titled “HOW I WRITE,” which reveals his drafting process, and page-long documents titled “ARCHIVE NOTES.” These notes elaborate on materials in the archive, ranging from Ishiguro’s one attempt to keep a diary to two early unpublished novels. Throughout the collection are notes with Ishiguro’s annotations, providing a further commentary from the author about his papers and his career.

“The papers offer a deeply intimate glimpse of Ishiguro’s creative process and his struggle to fashion each of his critically acclaimed novels. Rarely does an archive dramatize so fully the play of memory and its ties to the novelist’s art,” Enniss said.

The collection is already accessed frequently by international scholars, students and faculty members, including Fenves (now UT Austin’s president), who led a session on Ishiguro’s “Never Let Me Go” with incoming first-year students in fall 2015. Fenves engaged students in a discussion about the book’s themes while exploring Ishiguro’s papers.

“I am so pleased that Kazuo Ishiguro has won the Nobel Prize in literature,” Fenves said. “His archive is a source of tremendous inspiration for our students and scholars. He has a gift for crafting narratives that are at once haunting, imaginative and emotionally vital. He is one of the great authors living today.”

A selection of materials from Ishiguro’s archive, including early items that showcase how Ishiguro found his voice and developed into a writer, are on view in the Ransom Center’s galleries through Oct. 31.