You might expect that the risk of a new flu pandemic — or worldwide disease outbreak — is greatest at the peak of the flu season in winter, when viruses are most abundant and most likely to spread. Instead, all six flu pandemics that have occurred since 1889 emerged in spring and summer months. And that got some University of Texas at Austin scientists wondering, why is that?

Based on their computational model that mimics viral spread during flu season, graduate student Spencer Fox and his colleagues found strong evidence that the late timing of flu pandemics is caused by two opposing factors: Flu spreads best under winter environmental and social conditions. However, people who are infected by one flu virus can develop temporary immune protection against other flu viruses, slowing potential pandemics. Together, this leaves a narrow window toward the end of the flu season for new pandemics to emerge.

They report their findings today in PLOS Computational Biology. 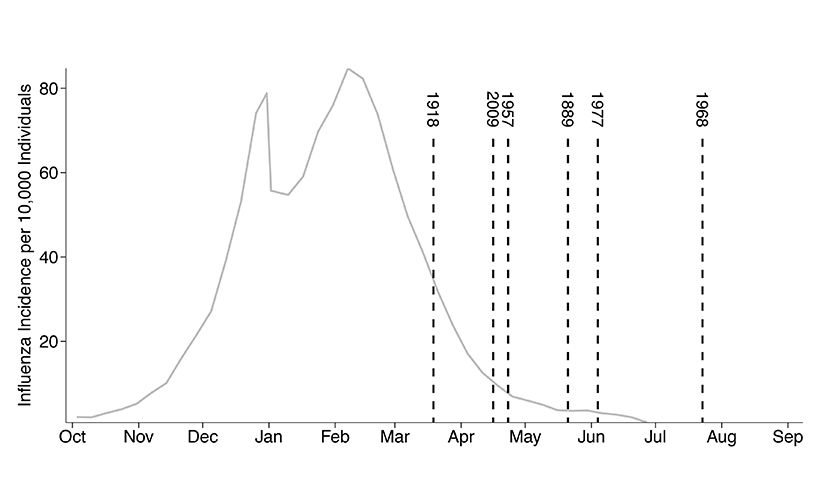 Each of the six flu pandemics since 1889 emerged in the Northern Hemisphere after the flu season (dashed lines), rather than during the peak of flu season. An average of several flu seasons is represented by a curve, with a peak in activity typically between late December and early March. Spencer J. Fox

The researchers’ model assumes that people infected with seasonal flu gain long-term immunity to seasonal flu and short-term immunity to emerging pandemic viruses. The model incorporates data on flu transmission from the 2008-2009 flu season and correctly predicted the timing of the 2009 H1N1 pandemic.

Using the supercomputers at the Texas Advanced Computing Center, the scientists used their model to run thousands of simulations in which new pandemic viruses emerged at different points throughout the flu season. They found that the combination of winter conditions and cross-virus immunity indeed led to spring and summer pandemics.

“We don’t know when or where the next deadly flu pandemic will arise,” says Lauren Ancel Meyers, a professor in the Department of Integrative Biology and principal investigator of the study. “However, the typical flu season leaves a wake of immunity that prevents new viruses from spreading. Our study shows that this creates a narrow, predictable window for pandemic emergence in the spring and early summer, which can help public health agencies to detect and respond to new viral threats.”

Future research may focus on more precisely characterizing the cross-strain immunity that impedes pandemic emergence during the normal flu season. Scientists may also explore how these pandemic risk patterns manifest in the Southern Hemisphere and tropical regions.

Funding was provided by the National Institute of General Medical Sciences and the UT Austin Graduate School.