AUSTIN, Texas — When it comes to sex between plants, tiny bees the size of ladybugs play a critical role in promoting long-distance pairings. That’s what scientists at The University of Texas at Austin discovered after one of the most detailed paternity tests in wild trees ever conducted. The research gives new insight into how tiny pollinating animals promote genetic diversity that is essential for plants’ adaptation in the face of disease, climate change and other threats relevant for agriculture and reforestation efforts worldwide.

In a study published this week in the Proceedings of the National Academy of Sciences, researchers identified the pathways that hundreds of wild bees traveled to and from the trees they pollinated across a forest area of more than 2.5 square miles (690 hectares).

To the biologists’ surprise, the smallest bees managed to cover distances just as far as their larger pollinating cousins, frequently acting as tiny matchmakers for trees  separated by more than a mile (>2 km). In fact, in half of the cases where a pair of trees separated by a significant distance created a fruit together, the pollen had been carried by a bee no bigger than a grain of rice.

“Size isn’t everything,” said Shalene Jha, an associate professor of integrative biology and the primary investigator on the study. “These little bees are responsible for major beneficial impacts in terms of reproduction and gene flow.”

The mapping of trees, bees and genetic markers took approximately four years and spanned three sections of a tropical rainforest near the Panama Canal. The area of study was 10 times the size of most previous research projects attempting to map pollen movement mediated by bees.

“If you work in a small portion of forest, you’re only capable of measuring pollen movement in a small area,” Jha said. “We picked up the signal about how far these little bees move because we started doing work that was commensurate with the scale at which they’re actually flying.” 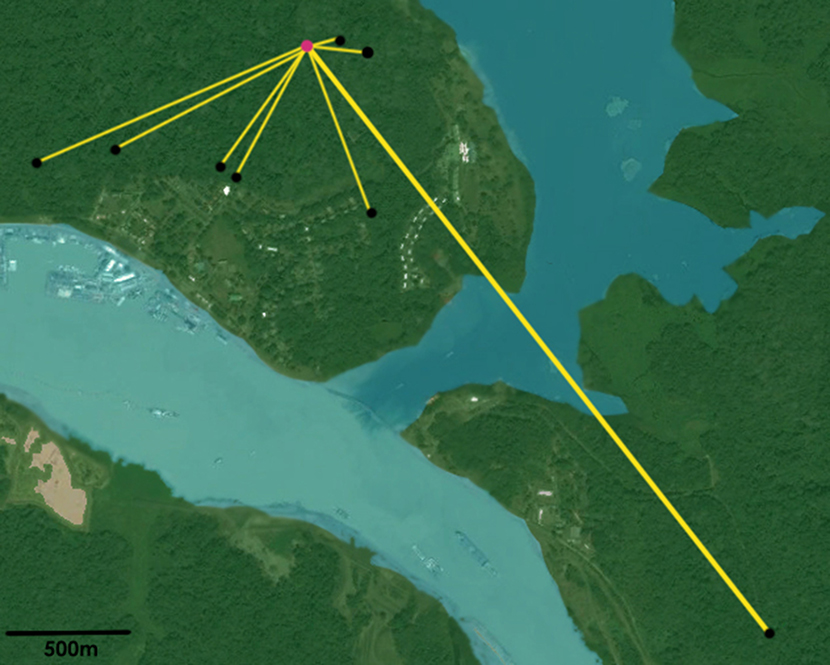 More than 85 percent of plants, including nearly two-thirds of food crops, rely on bees and other pollinating insects for sexual reproduction. Most studies of pollinating insects have focused primarily on larger bees, which carry the most pollen and, thus, help plants produce the most fruit and seeds.

Nonetheless, there are tens of thousands of bee species, and Jha and her team wanted to understand more about the function of smaller bees. They discovered that the tiny bees pay more visits to flowers than their larger counterparts, and they cover remarkable distances as they pollinate. Bees as small as a few millimeters move pollen across areas more than a million times their body size. To put that in perspective, an average adult person would need to travel from spots about as far apart as Los Angeles and Chicago to cover an equivalent distance.

Because these long-distance matches help prevent inbreeding among closely related plants, the far-flying bees aid trees in having a thriving new generation of offspring to replace them.

“We haven’t traditionally asked how pollinators influence the way genes are passed on across generations, but it’s incredibly important for long-term population persistence,” Jha said. “We typically look at seeds or the number of seeds when we want to know a bee’s role in pollination service, but not ‘who are the fathers of these seeds?’ ”

According to Jha, knowing the parents of any given seed or plant is essential. Farmers and foresters have long used this information to plan not only for quantity in output but also quality — for example, juicier or larger fruits in a crop, or faster-growing trees in a forest.

Panama is a biodiversity hotspot, and Miconia trees play a central role in the country’s rainforests. During the past half-century, deforestation has reduced the proportion of forest in the country by almost 30 percent, causing erosion and other challenges in an economically vital watershed — the one that surrounds the Panama Canal.

Jha believes that the new study sheds light both on how pollinators of all sizes can help to promote plant reproduction and reforestation in places like Panama, and how small pollinators help plants in ecosystems worldwide. Bee species in most places, including the United States, tend to vary in size and in pollinating behaviors in ways that are similar to the species studied in Panama. Because smaller bees have often shown more resilience than their larger cousins to threats such as habitat destruction, it’s helpful to know their potential as pollen dispersers in the face of other bees’ decline.

Partial funding support was provided by the National Science Foundation.