The East Antarctic Ice Sheet locks away enough water to raise sea level an estimated 53 meters (174 feet), more than any other ice sheet on the planet. It’s also thought to be among the most stable, not gaining or losing mass even as ice sheets in West Antarctica and Greenland shrink.

New research published on Nov. 14 in Nature led by The University of Texas at Austin and the University of South Florida found that the East Antarctic Ice Sheet may not be as stable as it seems. In fact, the ice sheet has a long history of expanding and shrinking — a finding that indicates the ice sheet may contribute substantially to global sea level rise as Earth’s climate warms. The new results came from geophysical and geological data collected during the first-ever oceanographic survey of East Antarctica’s Sabrina Coast. The glaciers in this region may be particularly susceptible to climate change because they flow from the Aurora Basin, a region of East Antarctica that mostly lies below sea level. 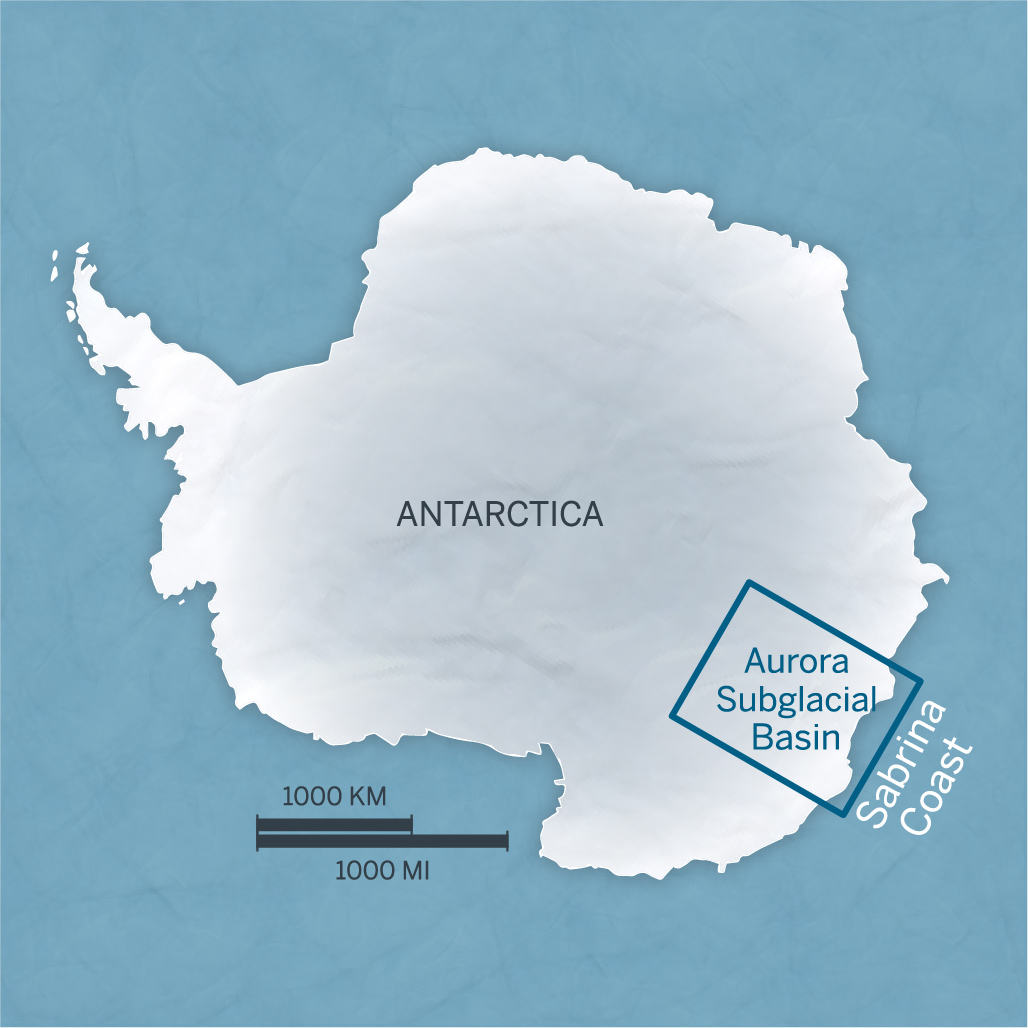 The researchers conducted the first-ever oceanographic survey of East Antarctica’s Sabrina Coast. The glaciers in this region may be particularly susceptible to climate change because they flow from the Aurora Basin, a region of East Antarctica that mostly lies below sea level. Sean Gulick/The University of Texas at Austin

Co-lead author Sean Gulick, a research professor at the University of Texas Institute for Geophysics (UTIG) and the UT Department of Geological Sciences (DGS), said the study found that glaciers from the Aurora Basin have been stable only for the past few million years.

“It turns out that for much of the East Antarctic Ice Sheet’s history, it was not the commonly perceived large stable ice sheet with only minor changes in size over millions of years,” he said. “Rather, we have evidence for a very dynamic ice sheet that grew and shrank significantly between glacial and interglacial periods. There were also often long intervals of open water along the Sabrina Coast, with limited glacial influence.”

UTIG and DGS are units of the UT Jackson School of Geosciences.

Using marine seismic technology deployed from an icebreaker, researchers were able to reconstruct how glaciers on the Sabrina Coast have advanced and retreated during the past 50 million years. The team also took core samples of mud from 1 to 2 meters below the seafloor and analyzed ancient pollen to determine the age of the samples. The analysis was conducted at Louisiana State University’s Center for Excellence in Palynology.

The Sabrina Coast, and nearby Aurora Basin, are particularly important because regional glaciers are presently thinning and retreating as nearby ocean waters warm. If the ice sheet in the Aurora Basin melted, global sea levels would rise more than 3-5 meters (10-15 feet).

According to the team’s data, ice advanced from the Aurora Basin and retreated back again at least 11 times during the first 20 million years of the ice sheet’s history. Researchers also found that the young ice sheet was much wetter than it is today, with meltwater from the surface flowing into a network of channels beneath the ice. These channels were eroded into the rock below the ice, leaving distinctive formations known as “tunnel valleys.” This dynamic time for East Antarctic glaciers occurred when atmospheric temperatures and atmospheric CO2 levels were similar to or higher than present day.

The seismic data collected by the researchers shows geological formations made in layers of seafloor by glaciers. Tunnel valleys are a type of formation made by meltwater that flowed from a glacier and eroded the underlying rock. They indicate that the East Antarctic Ice Sheet was a much wetter system millions of years ago. Sean Gulick/The University of Texas at Austin

“We shouldn’t view this as one ice sheet that suddenly grew to its present size, but rather one that was a transient ice sheet that expanded every couple million years or so,” Gulick said.

Around 6 million years ago, the East Antarctic Ice Sheet expanded, stabilized and ceased producing large volumes of meltwater. However, as climate change raises global air temperatures, it is possible that East Antarctic glaciers could start melting, a change that could make the ice sheet shift back into unstable territory.

“A lot of what we are seeing right now in the coastal regions is that warming ocean waters are melting Antarctica’s glaciers and ice shelves, but this process may just be the beginning,” Shevenell said. “Once you have that combination of ocean heat and atmospheric heat — which are related — that’s when the ice sheet could really experience dramatic ice mass loss.”

The National Science Foundation (NSF) manages the United States Antarctic Program and provided the funding and logistical support that made field research to the Sabrina Coast possible.

“The past behavior and dynamics of the Antarctic ice sheets are among the most important open questions in the scientific understanding of how the polar regions help to regulate global climate,” said Jennifer Burns, director of the NSF Antarctic Integrated Science System Program. “This research provides an important piece to help solve that massive puzzle.”