AUSTIN, Texas — Researchers from the University of Texas Institute for Geophysics (UTIG) have helped discover the first subglacial lakes ever found in the Canadian High Arctic.

The two new lakes are a potential habitat for microbial life and may assist scientists in the search for life beyond Earth, particularly on Jupiter’s icy moon Europa. The findings, published April 11 in Science Advances, were made possible by airborne radar data acquired by UTIG and NASA.

“Geophysically characterizing these lakes and their sub-ice surroundings, followed by very careful sampling of their contents, should give us a real head start on understanding Europa’s potential for hosting life,” said co-author Donald Blankenship, a UTIG senior research scientist.

Although there are more than 400 known subglacial lakes in the world, concentrated primarily in Antarctica with a few in Greenland, these are the first found in the Canadian Arctic. And unlike all the others — which are thought to contain freshwater — these two appear to consist of extremely salty water. All subglacial lakes are good analogues for life beyond Earth, but the hypersaline nature of the recently discovered lakes makes them particularly tantalizing analogues for ice-covered moons in our solar system, researchers said. 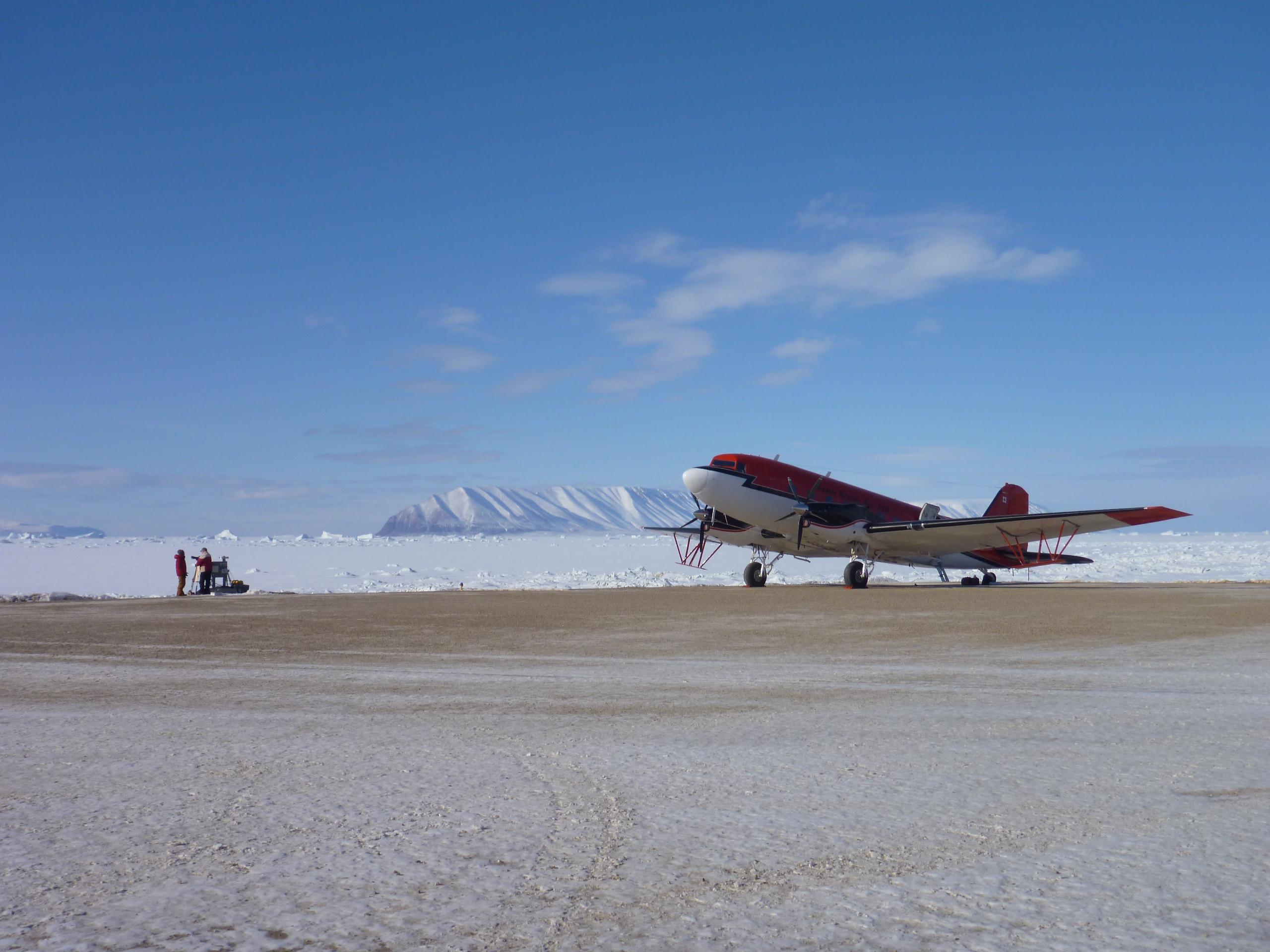 A DC-3 aircraft stationed on the Quaanaaq airfield in Greenland, minutes before conducting an aerogeophysical survey over Canadian Arctic ice caps. The radar antennae (red) are mounted beneath the wings of the aircraft. Tom Richter

In 2011, researchers from UTIG showed that Europa probably contains hypersaline lakes of liquid water within an ice shell that floats atop of a global ocean. The new lakes observed in Canada are thought to be similar to these potential lakes locked inside Europa’s icy shell. An analysis of radar data shows that the lakes discovered in Canada are beneath 550 to 750 meters of ice under the Devon Ice Cap, one of the largest ice caps in the Canadian Arctic. They are thought to be the first isolated hypersaline subglacial lakes in the world, having no contact with an outside environment for thousands of years.

​​​“If there is microbial life in these lakes, it has likely been under the ice for at least 120,000 years, so it likely evolved in isolation,” said lead author Anja Rutishauser, a Ph.D. candidate at the University of Alberta who will join The University of Texas at Austin as a postdoctoral fellow when she finishes her degree. “If we can collect a sample of the water, we may determine whether microbial life exists, how it evolved, and how it continues to live in this cold environment with no connection to the atmosphere.”

By evaluating the airborne survey data and, eventually, samples from the lakes, scientists can better prepare for NASA’s forthcoming Europa Clipper mission, which is expected to deploy similar remote sensing techniques to characterize Europa’s ice shell, said Blankenship, who is leading the development of the ice-penetrating radar sounder for the Clipper mission, an instrument similar to the one used to discover the Canadian lakes. 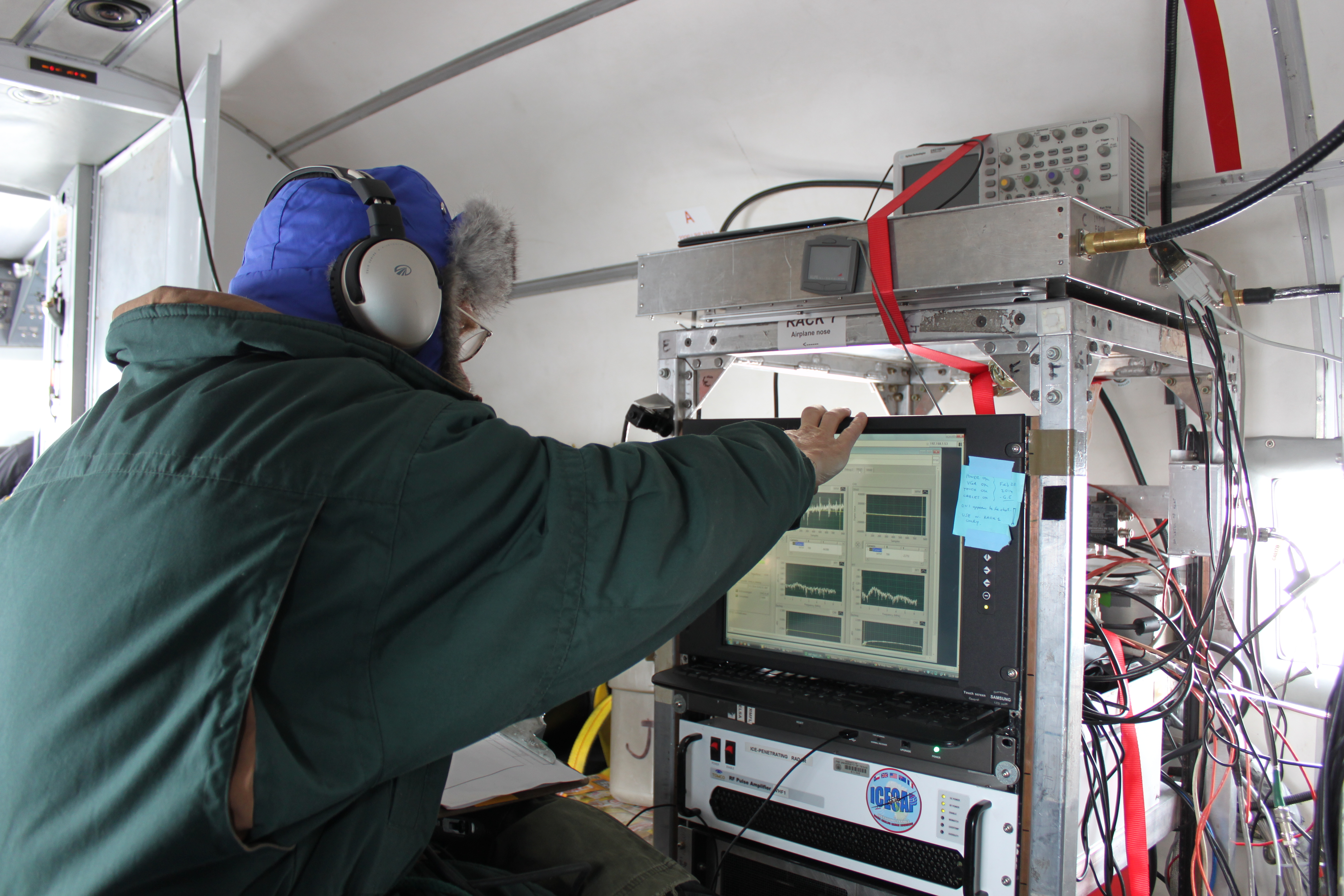 A UTIG research scientist operating the radar instruments inside a DC-3 aircraft during a survey flight over the Devon Ice Cap. Anja Rutishauser

This study represents a new collaboration between Canada and the United States. Researchers with Montana State University, Stanford University and the Cambridge University Scott Polar Research Institute also worked on the project. In addition to Blankenship, UTIG researchers Jamin Greenbaum, Cyril Grima and Duncan Young worked on the study. UTIG is a research unit of the UT Jackson School of Geosciences.

“It’s amazing how the trilateral collaboration between Canadian, U.S. and U.K. universities to understand ice cap response to climate change evolved into a paradigm shift in our perspective on potential terrestrial analogs for extraterrestrial habitats,” Blankenship said.

UTIG and University of Alberta researchers are planning to return to the Canadian Arctic this spring for additional data acquisition over the lake area and surrounding ice caps with support from Canada’s W. Garfield Weston Foundation.

UTIG’s data acquisition and processing were supported by NASA’s Instrument Concepts for Europa Exploration Program, the G. Unger Vetlesen Foundation and the National Science Foundation; additional data used in the research were acquired by NASA’s Operation IceBridge Mission. Blankenship was supported by the Fulbright Scholar Program for data interpretation and synthesis activities. The project was supported by the Natural Sciences and Engineering Research Council of Canada, Alberta Innovates Technology Futures, the CRYSYS Program (Environment Canada), and the U.K. Natural Environment Research Council.