AUSTIN, Texas — New research confirms that wild species can adapt quickly to human-induced changes, but also shows how such adaptation can cause those species to be caught in deadly “eco-evolutionary traps” when humans introduce new resources in the environment and then quickly take them away.

The study, by researchers from the University of Plymouth and The University of Texas at Austin, was released May 9 in Nature and will be the journal’s cover story on May 10.

In the study, researchers followed a large, isolated population of Euphydryas butterflies on a Nevada ranch. The butterflies in the area had historically fed on a native plant, but researchers documented how the study population evolved complete dependence on a European weed introduced to Nevada with cattle ranching more than 100 years ago. The butterfly population then quickly died off shortly after cattle ranching ended in 2005, a change that effectively eliminated the weed for use by the butterfly, springing what researchers dubbed an eco-evolutionary trap. 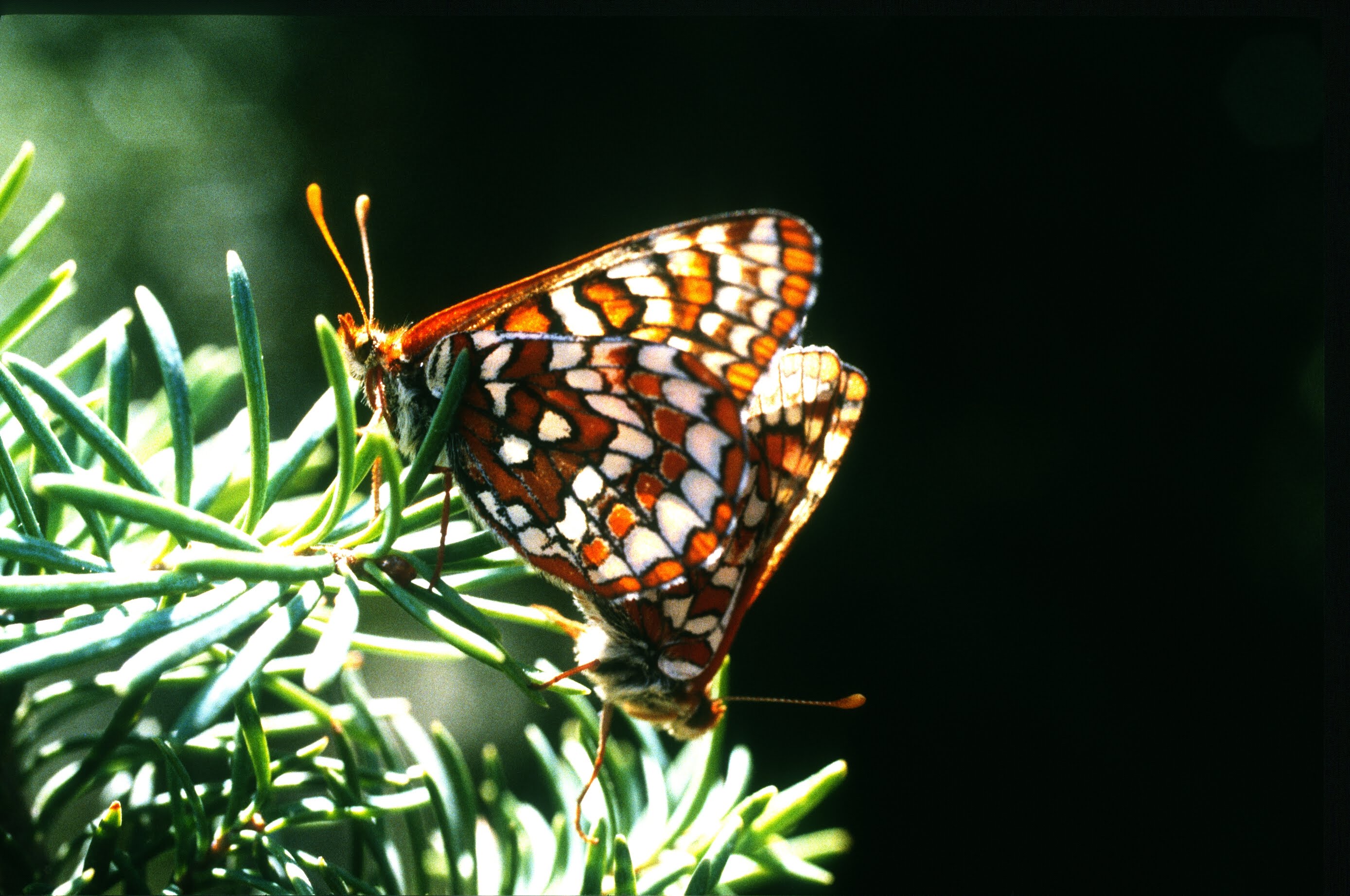 A mating pair of Edith’s checkerspot, which are the focus of a new study showing how wild species can be caught in “eco-evolutionary traps” when humans introduce new resources in the environment and then quickly take them away. Singer & Parmesan

European conservation biologists have long believed this type of process is underlying widespread butterfly population extinctions across Europe, but in Europe the evolution of dependence on human management occurred before anyone documented it. The researchers said that the study is the first that provides hard evidence of the process in real time.

“We predicted this extinction in our Nature paper in 1993, where we said that, by evolving to be dependent upon a particular type of human land management, the butterflies were rendering themselves vulnerable to rapid changes in that management that could occur faster than the butterflies could evolve,” said lead author Michael Singer, a professor at the University of Plymouth.

Co-author Camille Parmesan, a professor at the University of Plymouth and an adjunct professor at the UT Jackson School of Geosciences, said the findings point to the need for a more comprehensive approach that meshes land management with conservation.

“Our study also highlights that North American wild life seem to be following in the path of their European cousins, by adapting to particular types of land use,” she said. “The historical approach to conservation in North America is fencing off an area, protecting it, then leaving it alone. Our study suggests that American conservation managers may need to look to their European counterparts for new approaches, where conservation goes hand-in-hand with maintaining traditional land management, even including cattle ranching.”

Singer and Parmesan spent more than three decades studying changes in the diet of the Euphydryas butterflies, commonly known as the Edith’s checkerspot, in a spring-fed meadow on a family-run ranch in Nevada. In particular, the researchers assessed how the introduced weed Plantago (narrow-leaved plantain) affected the butterflies.

However, once cattle grazing was eliminated from the property in 2005, grasses quickly grew up around the plantains, shading and cooling them by about 7 degrees Celsius (roughly 13 degrees Fahrenheit) and making the environment too cool for the butterfly larvae. The change in environment caused the local butterfly population to die by 2008. However, in 2013–2014 the site was naturally recolonized by a new population of Euphydryas butterflies that once again fed exclusively on blue-eyed Mary. 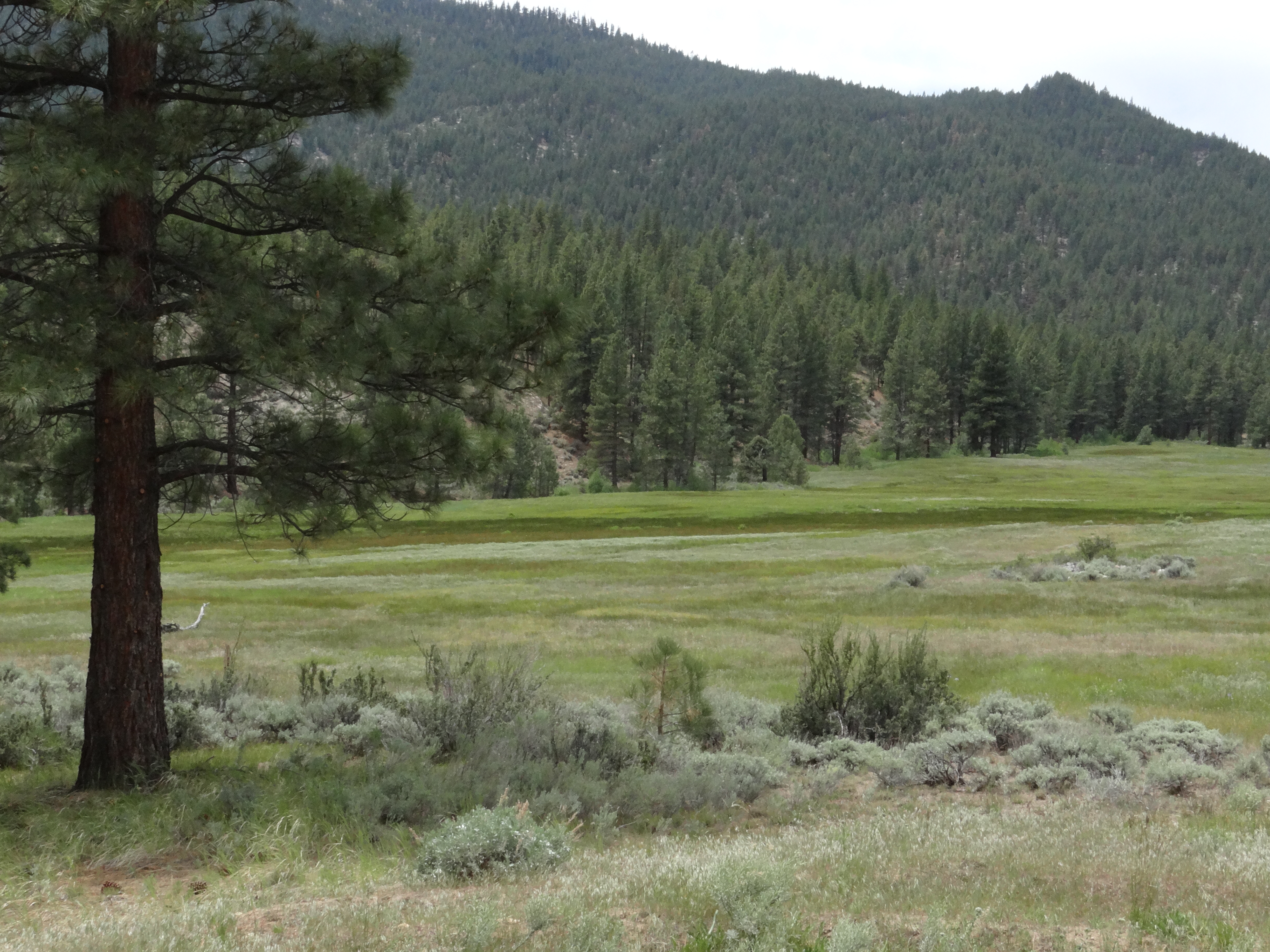 A picture of a meadow on a Nevada cattle ranch that is the site of a new study in Nature on how wild species react to human-induced change. Camille Parmesan

Parmesan said the study is a lesson in how human-induced environmental changes can affect local populations and could be analogous to effects of climate change on wild species.

“Climate warming is another form of anthropogenic change that is occurring faster than past natural changes and is likely to cause problems for species whose evolution is unable to keep pace,” she said. “If climate change were natural, it is likely that many wild species would be able to adapt, both through current evolution and through flexible changes in behaviour and life history. But human-driven climate change is occurring at a much faster rate than most past major climatic shifts. Ecologists have long been arguing that this is likely to lead to more extinctions than have happened with past climatic changes, and this study supports the arguments that rapid climate change will prove detrimental to biodiversity both in the short and long term.”