AUSTIN, Texas — A new drug lead shows promise that it could reduce the size of cancerous tumors much more effectively than current treatments.

As cancer patients know all too well, many highly effective anti-cancer drugs don’t stay effective long. Most tumors will become drug resistant over time as their cells rapidly mutate. Chemists from The University of Texas at Austin and Korea University have demonstrated a new approach to blocking cancer-drug resistance that they believe could be applied to any type of cancer. In a dramatic result, the approach — which involves chemically combining two existing drugs in a new way — produced tumors less than half as large in mice compared to the traditional treatment of the same drugs given as a “cocktail” of unconnected drugs.

“The best part is that our drug candidate was so much more effective in mice studies than one of the most powerful cancer drugs on the market,” said Jonathan Sessler, a professor at UT Austin and co-lead author of a study published today in the journal Chem. “The difference is mind blowing.”

A team led by Sessler and Jong Seung Kim at Korea University has developed a drug lead, provisionally called C1, that forces tumors into a much more vulnerable state and delivers a potent toxin. Tumor-bearing mice that were given their drug had about 75 percent smaller tumors after two months than untreated mice. In addition, their drug was twice as effective as the traditional drug cocktail approach. 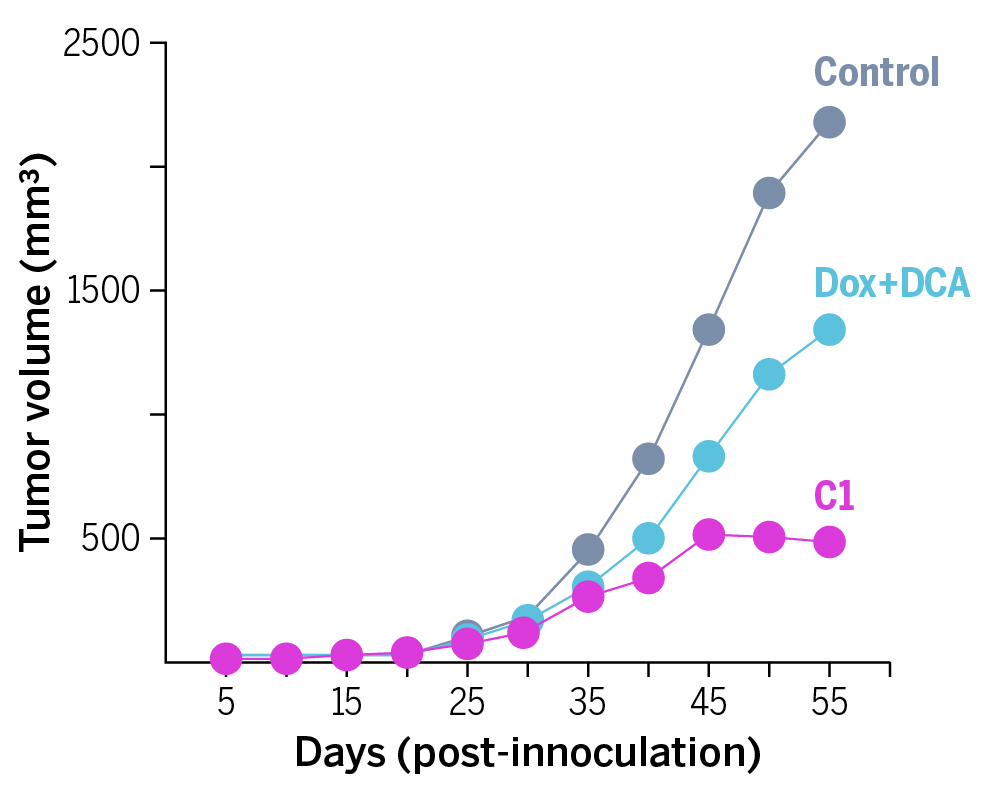 Mice bearing human breast cancer tumors that were given C1 had about 75 percent smaller tumors (pink) after two months than mice that were not treated (grey) and tumors half the size of the ones found in mice receiving the same drugs (Dox and DCA) separately (blue). Jenna Luecke/University of Texas at Austin

This new drug works in part by targeting a tumor’s metabolism. When it’s just starting, a cancerous tumor is like an out-of-shape runner: It has a hard time catching its breath. It’s growing so fast and burning so much energy that it can’t get enough oxygen. Normally, cells in the body use aerobic (oxygen-requiring) metabolism, but over time, tumors shift to anaerobic metabolism. This produces energy more quickly, satisfying cancer cells’ need for a quick fix, but is ultimately inefficient.

Then cancer runs into a second challenge. Just like the out-of-shape runner, gasping for air and experiencing cramps, waste begins to build up in cancer cells. Just like a runner getting into shape, cancer cells deal with this problem by producing more waste transporters, molecules that remove waste. And because these transporters also allow cancer cells to remove drugs, this increase leads to drug resistance.

The chemists’ innovation was in physically linking an anti-cancer toxin to a molecule that keeps tumors breathing normally.

Two of the active elements in C1 are doxorubicin (Dox), a powerful cancer chemotherapy agent that’s been used for decades; and a dichloroacetic acid (DCA) subunit, which forces a cancer cell’s metabolism back to a vulnerable state—before it switched to anaerobic metabolism. The researchers didn’t invent these two elements, but they are the first to combine them into a single molecule and test them on tumor-bearing mice.

The drug lead, C1, enters the cancer and systematically breaks apart to release DCA and doxorubicin. The release of DCA jumpstarts normal, oxygen-requiring metabolism in the mitochondria, which is the part of the cell responsible for producing energy. As cancer cells go back to using normal metabolic pathways, fewer waste products are made and transporters are no longer necessary. With the cancer cell no longer able to easily excrete waste, doxorubicin is able to stay in the cell and prevent it from replicating. This metabolic re-programming strategy resulted in significant tumor growth delay in mice.

Sessler says the key to C1’s effectiveness is that the two active elements are combined in a single molecule so that when they reach cancer cells, they are in the same place at the same time. A third element targets a part of cancer cells called the mitochondria and then allows the release of Dox and DCA from there. This latter design element ensures that the two active drug elements get delivered where they will be most effective.

The mice in this study bore tumors that were already resistant to the chemotherapy drug Dox, showing that the combined experimental drug did indeed overcome resistance.

The researchers have filed a patent on their drug lead, C1.

Sessler is a multiple cancer survivor who has dedicated his career to finding treatments.

“Right now, a cancer diagnosis is often a death sentence,” Sessler said. “We’d like to see cancer become a chronic disease in our lifetime.”

Funding for this research was provided by the U.S. National Cancer Institute, the Robert A. Welch Foundation and the Creative Research Initiatives program of the National Research Foundation of Korea.