AUSTIN, Texas — After four years of studies, scientists have found no link between methane present in water wells outside of Fort Worth and nearby gas production activities in the Barnett Shale. The methane appears to have migrated naturally to the wells from the shallower Strawn formations and not from the Barnett Shale, where natural gas production and hydraulic fracturing are occurring. By conducting the studies, researchers believe they have developed important methods that could be applied in similar situations to determine where methane originates in an environment.

The latest study, published in August in Water Resources Research, is the fifth and final in a series conducted by researchers at The University of Texas at Austin and the University of Michigan that looks at groundwater wells in the Barnett Shale area. The vast majority of the wells have little or no methane in the water, but a cluster of 11 wells near the Parker County and Hood County line had methane levels above 10 milligrams per liter of water, a level that can require venting of well water systems to ensure the flammable gas does not accumulate to hazardous levels. 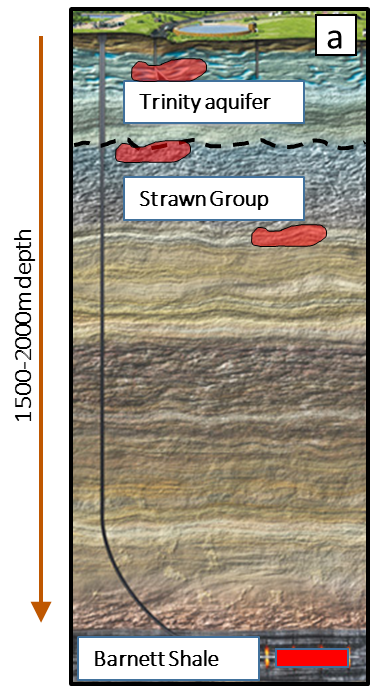 A cross section illustrating isolated pockets of natural gas (red shapes) in the Strawn Group, the geologic strata that overlies the Barnett Shale. The shapes are in contact with groundwater sources within the Trinity Aquifer.  J.P. Nicot / The University of Texas at Austin

“Protecting groundwater quality is a fundamental requirement for sustainable energy development, and it is important to develop tools that can be used to monitor ongoing gas exploration and production activities,” said lead author Toti Larson, a research associate at the Bureau of Economic Geology, a research unit of the UT Jackson School of Geosciences.

Methane is the primary component of natural gas. Hydraulic fracturing, or fracking, is a method of artificially producing fractures in wells thousands of feet deep to reach natural gas deposits in shale rock. Methane in the study area is also found in much shallower and smaller deposits hundreds of feet below the ground. These shallower deposits formed as a result of methane migrating from deeper sources toward the surface over millions of years. The shallow reservoirs in the study area are in a geologic unit called the Strawn Group.

In the series of studies, researchers used the chemistry of dissolved gases in groundwater — including methane, noble gases and nitrogen — to identify their likely sources. The latest study looked at nitrogen gas to determine the origin of the methane. Scientists are interested in measuring the concentrations of the other gases that are found with methane in the groundwater because they can give clues about the methane’s starting place.

The Barnett Shale, located in the Fort Worth region of northern Texas, is one of the largest and most productive natural gas fields in the United States, with about 20,000 production wells. To examine the source and extent of methane in water wells, the researchers analyzed samples from more than 450 wells across 12 counties in the western Barnett Shale. The vast majority of samples — 85 percent — showed very low methane levels in the groundwater of less than 0.1 milligrams of methane per liter of water.

The researchers’ findings and conclusions have remained consistent through the studies. Researchers said the studies show that it is important to use a wide range of tools to identify the source of methane in shallow groundwater aquifers. The methods involve matching the composition of gases from samples to the compositions of gases from their source, comparing carbon isotope values between the sources, and looking at noble gases and gases that are atmospheric in origin to help determine the source of the methane.

In the latest study, researchers looked at the levels of nitrogen, which, in addition to being found in natural gas deposits, is found in the atmosphere and added to groundwater when it is recharged by rainfall. They found that the stray methane gas in the water wells had higher levels of nitrogen than found in the Barnett Shale, with levels being more typical of the levels measured in the Strawn Group. The findings are consistent with the other four studies.

“Nitrogen is another line of investigation,” said J.P. Nicot, a research scientist at the bureau. “This team has developed a method that can be used to monitor fugitive natural gas in groundwater.”

The study was funded by Research Partnership to Secure Energy for America, a program authorized by the U.S. Energy Policy Act of 2005.

The University of Texas at Austin is committed to transparency and disclosure of all potential conflicts of interest. All UT investigators involved with this research have filed their required financial disclosure forms with the university. Members of the UT team are involved in broadly related geological research funded by energy companies, non-profit organizations and environmental and other government agencies. None of their sponsored research covers the specific area of this study, the presence of methane in groundwater. The university itself derives income from oil and gas royalties in the Barnett Shale, the formation covered in the research. Journalists can contact the University Communications office (512-471-3151) for additional details.