AUSTIN, Texas — We are repeatedly exposed to the influenza virus via infections, vaccinations and our communal environments. The annual flu shot is believed to be the best line of defense, and doctors recommend vaccinations every year because the flu virus is in a constant state of adaptation and mutation, rendering older vaccines obsolete.

The conventional wisdom guiding our long-established annual flu shot comes from an understanding that once a person is newly vaccinated, the immune system is reset and all new antibodies are directed to the new flu strain.

However, new research from the Cockrell School of Engineering at The University of Texas at Austin published in a recent issue of the journal Cell Host & Microbe highlights the role played by immunological imprinting — or how the immune system fights the flu after previous exposure to the virus via infections or vaccinations — in the elicitation of new antibodies.

“After being vaccinated with a new strain of flu, our immune systems appear to be expanding and boosting antibodies generated by previous exposures to earlier flu viruses, whether by infection or vaccination,” said George Georgiou, a professor of biomedical and chemical engineering and molecular biosciences, a leader in the field of therapeutics and immune responses and co-author of the study. 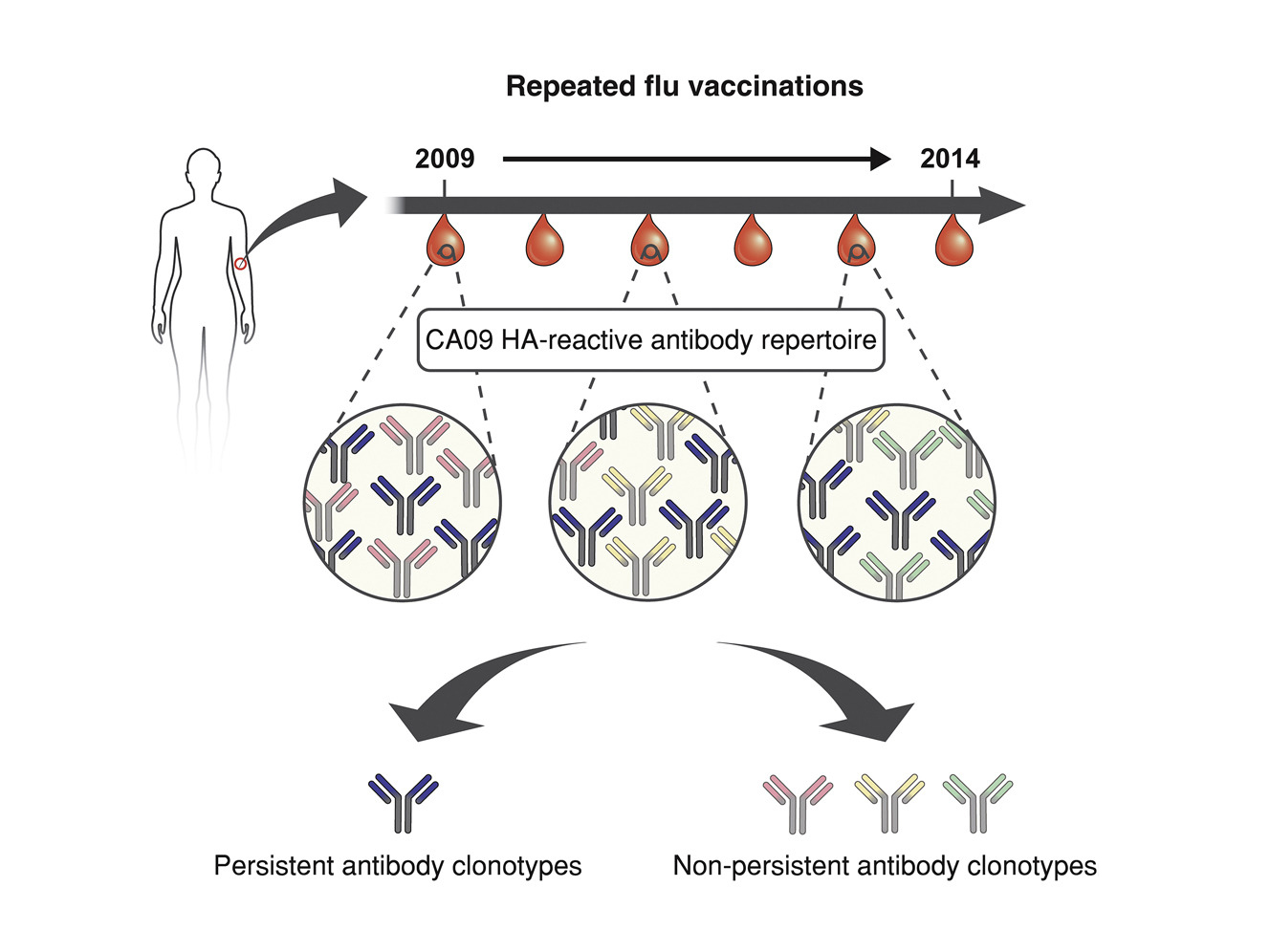 The researchers examined the composition and dynamics of an individual donor’s antibody repertoire over a five-year period during which the donor had been infected or vaccinated with influenza multiple times. The study suggests our immune systems are “imprinted” by antibodies that had been elicited in response to influenza strains encountered previously in life.

“Each vaccination still elicits new antibodies that are highly specific to the new strains, but these new antibodies decay over time, returning to the antibody repertoire that already existed before the vaccination,” said Jiwon Lee, a postdoctoral fellow in Georgiou’s Laboratory of Protein Therapeutics and Applied Immunology who led the study.

The researchers found that the antibody repertoires remained highly static throughout. More than 70 percent of the antibody molecules found in the donor’s bloodstream remained the same over five years. More than two-thirds of these persistent antibodies targeted invariant parts of the virus — the elements that do not change from one year to the next.

These persistent antibodies continue to be produced by the immune system for years and can affect our ability to generate novel antibodies that recognize unique molecular features of a new seasonal strain.

“Currently, there is a very large scientific effort underway to design flu vaccine candidates that focus the immune system to produce antibodies targeting the invariant sites of vulnerability of the influenza virus,” Lee said.

Vaccines that can imprint one with highly potent antibodies and, therefore, combat a broad range of influenza strains, could reduce or even eliminate the need for annual vaccinations.

Influenza is still one of the world’s most widespread viruses and is extremely difficult to contain. Globally, the influenza virus infects more than 1 billion people and results in approximately half a million deaths annually. The National Institute of Allergy and Infectious Diseases is investing heavily in the development of a universal flu vaccine that could provide long-term protection against multiple subtypes of flu. Such a vaccine could eliminate the need for the annual flu shot entirely.

Until such a universal flu vaccine is successfully developed, the annual flu shot is unquestionably still the best way to prevent infection.

This study was conducted in collaboration with the Institute for Research in Biomedicine, Switzerland, and was funded by the National Institutes of Health, the U.S. Department of Defense and the Clayton Foundation.