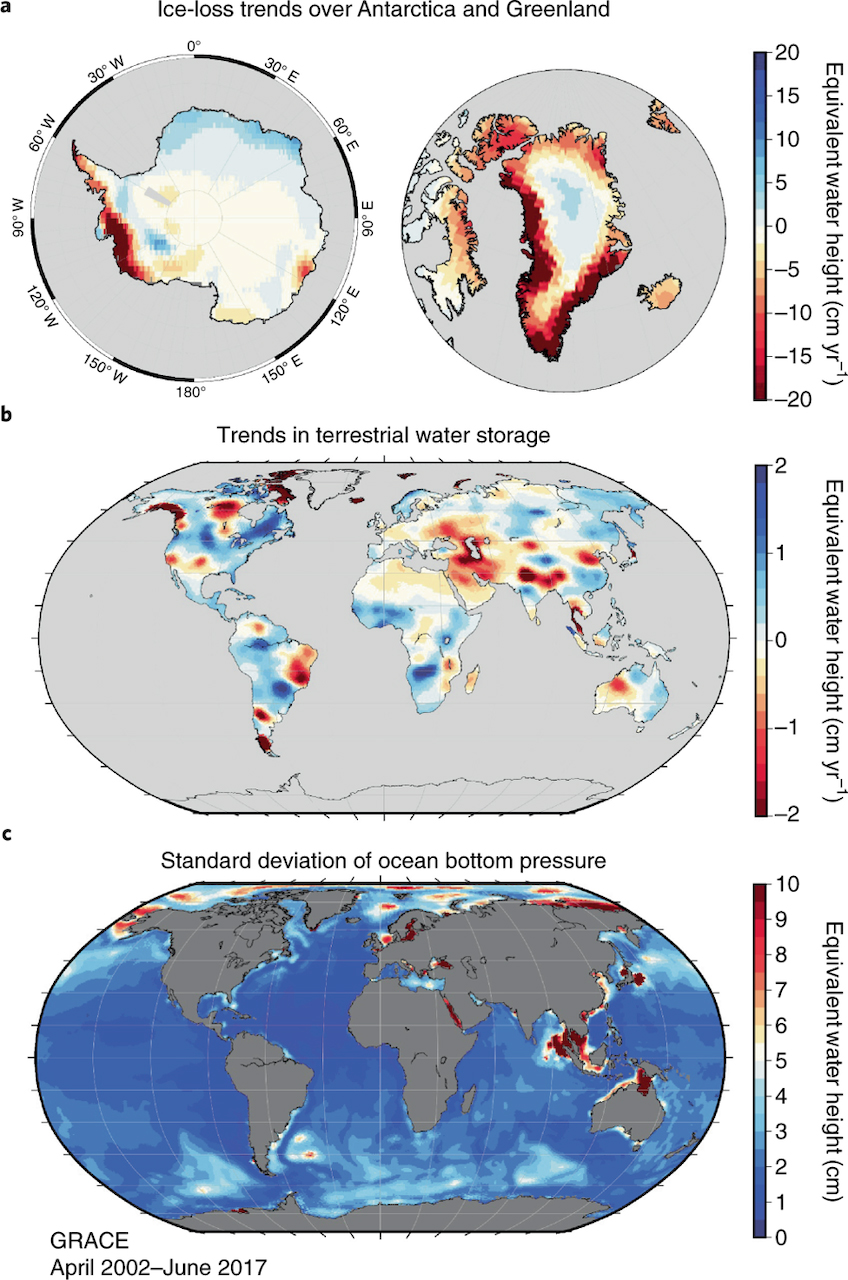 AUSTIN, Texas — The University of Texas at Austin team that led a twin satellite system launched in 2002 to take detailed measurements of the Earth, called the Gravity Recovery and Climate Experiment (GRACE), reports in the most recent issue of the journal Nature Climate Change on the contributions that their nearly two decades of data have made to our understanding of global climate patterns.

Among the many contributions that GRACE has made:

Intended to last just five years in orbit for a limited, experimental mission to measure small changes in the Earth’s gravitational fields, GRACE operated for more than 15 years and has provided unprecedented insight into our global water resources, from more accurate measurements of polar ice loss to a better view of the ocean currents and the rise in global sea levels. The mission was a collaboration between NASA and the German Aerospace Centre and was led by researchers in the Center for Space Research in UT’s Cockrell School of Engineering.

By measuring changes in mass that cause deviations in the strength of gravity’s pull on the Earth’s various systems — water systems, ice sheets, atmosphere, land movements and more — the satellites can measure small changes in the Earth system interactions.

“By monitoring the physical components of the Earth’s dynamical system as a whole, GRACE provides a time variable and holistic overview of how our oceans, atmosphere and land surface topography interact,” said Byron Tapley, the Clare Cockrell Williams Centennial Chair Emeritus in the Department of Aerospace Engineering and Engineering Mechanics who established the Center for Space Research at UT in 1981 and who served as principal investigator of the GRACE mission.

The GRACE mission was selected as the first PI-led Earth System Pathfinder Mission, with Tapley and the Center for Space Research at the helm, and it was implemented under a collaboration with the NASA Jet Propulsion Laboratory and the German Geodetic Institute in Potsdam. The mission was implemented under a partnership between NASA and the German Space Agency, but UT faculty members, researchers and students made major contributions to the engineering, concept development and scientific data analysis components of the experiment. Despite being a risky venture operating on minimal funding, the GRACE mission surpassed all expectations and continues to provide a paradigm-shifting set of measurements.

“The concept of using the changing gravimetric patterns on Earth as a means to understanding major changes in the Earth system interactions had been proposed before,” Tapley said. “But we were the first to make it happen at a measurement level that supported the needs of the diverse Earth-science community.”

Now that the GRACE Follow-On mission, which the Center for Space Research will continue to play a role in, has launched successfully, the chance to continue the GRACE record for a second multidecadal measurement of changes in mass across the Earth system is possible. Engineers and scientists anticipate that the longer data interval will allow them to see an even clearer picture of how the planet’s climate patterns behave over time.

Image caption: Global representation of trends and variability in ice and water mass recovered by GRACE over 15 years. The top figure, which shows trend maps over Antarctica, Greenland and part of the Arctic, represent changes in ice mass. The middle trend map mainly represents changes in the terrestrial water storage. The bottom figure shows variability in ocean bottom pressure. In the last figure, the color scales represent variability, with the highest variability shown in red. Credit: Cockrell School of Engineering, The University of Texas at Austin