AUSTIN, Texas — Although many Texas voters (66%) say that the coronavirus is a “significant crisis,” they register higher levels of concern about the deepening economic problem and the impact it is having in their lives, according to the latest University of Texas/Texas Tribune Poll.

In a battery of questions asking 1,200 registered Texas voters their level of concern about current issues and problems, 54% indicated they were either extremely or very concerned about the spread of the coronavirus in their community. Larger majorities expressed the same extent of concern about the national economy (72%), Texas’ economy (67%) and unemployment (75%).

Among other economic concerns: 34% were either extremely or very concerned about paying their bills; 31% about paying their rent or house payment; 27% about losing their job. The poll also found 30% of Texans expressing the same level of concern about interrupting their education or that of a family member.

“While Texans understand that the coronavirus is a significant crisis, the growing economic crisis is also exerting a powerful effect on attitudes,” said James Henson, director of the Texas Politics Project at UT Austin and a co-director of the poll. “Many Texans are experiencing the effects of the deepening economic crises and are faced with managing high levels of concern about both COVID-19 and economic distress.” 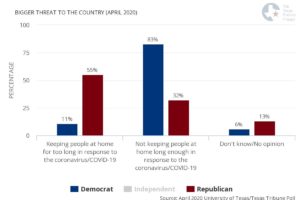 With Gov. Greg Abbott expected to loosen some elements of his stay-at-home order in the near future, 55% of Texas voters said that not keeping people at home long enough poses a larger threat to the country than keeping people at home for too long; 34% think the opposite, seeing the bigger threat in the result of extended stay-at-home orders. Here as in much of the survey, the poll found clear differences between Democratic and Republican perceptions of the crises: 11% of Democrats and 55% of Republicans think keeping people home too long is the bigger threat.

“Republican voters are much more likely to think that the virus is close to being contained, and that life will be going back to some version of normal,” said Joshua Blank, research director of the Texas Politics Project. “Ideologically speaking, Democrats are generally more inclined to accept large-scale government intervention and Republicans more likely to elevate the importance of the economy, leading both groups, at least partially, to different conclusions about how, and how fast, to reopen the economy.”

In a question about whom respondents trust to give them accurate information about COVID-19, medical and health professionals were trusted by 87% and distrusted by only 8%, and the Centers for Disease Control and Prevention was trusted by 70% and not trusted by 23%. Family and friends were trusted sources for 63%. Only 34% said they trusted the news media, and even fewer trusted social media, at 17%.

Among political figures included in questions about trust, 58% trusted information from Abbott, and 55% trusted what they learned from their local elected officials. President Donald Trump was considered a trusted source by 44%, but 49% were distrustful of information provided by the president.

The clear partisan divide in attitudes is also evident in whom Republicans and Democrats trusted for information. Texas Republicans’ three most trusted sources among the choices presented were medical and health professionals (trusted by 87%), Abbott (85%) and Trump (82%). Democrats’ most trusted sources were medical and health professionals (93%), the CDC (84%), and their friends and family (62%).

“These days, even during a pandemic, partisans are suspicious of political leaders from the other side,” said Daron Shaw, co-director of the poll and the Frank C. Erwin, Jr. Professor of State Politics at UT Austin. “In this case, Democrats are not necessarily convinced that Republican leaders are on top of the situation or that they are telling us everything that we need to know.”

In the context of the statewide stay-at-home order issue in effect in Texas since April 2,  63% of Texans said they are only leaving home when absolutely necessary, with another 9% saying that they are not leaving home at all. Among the remainder, 20% said they’re still leaving their residence but being careful, and 9% indicated they are living life as normal.

The poll also asked Texans whether they favored various measures taken by Texas’ state and local governments to address the coronavirus/COVID-19. Their responses were as follows:

The University of Texas/Texas Tribune survey has an overall margin of error of +/- 2.83 percentage points. Data was collected April 10-19 over the internet by YouGov based on a questionnaire written by the directors of the poll at UT Austin.