“This is another sign of Texas’ increasing electoral competitiveness after declining Republican victory margins in statewide races over the last two elections,” said poll co-director James Henson, director of the Texas Politics Project at UT Austin. Trump won Texas’ electoral votes in 2016 when he defeated Hillary Clinton by a margin of just under 9 percentage points.

“But there are still months of campaigning to go in an electoral environment more unpredictable than any in recent memory, so I wouldn’t make any predictions based on where the race stands right now,” Henson said.

As the United States continues to grapple with a flaring pandemic, a hobbled economy and a reckoning with persistent racial inequities, Texans have turned dour in their assessments of the country even as their views of Trump remain largely unchanged. The president’s job approval rating dropped marginally (3 percentage points) between this year’s April and June polls: 46% of Texans approved of his job performance in the most recent poll, and 48% disapproved.

“While this most recent poll finds a slight decline in Texans’ assessment of the president’s overall job performance, assessments have remained remarkably consistent in Texas over the duration of his presidency,” said Joshua Blank, director of research for the Texas Politics Project. “This is largely a result of the durable support the president enjoys among Texas Republicans, which seems to be unaffected by factors we would normally consider determinative, like a flagging economy or an out-of-control pandemic.”

The poll found 86% of Texas Republicans approving of the job Trump is doing as president — 62% approved strongly. Among Democrats, 5% approved of his performance and 93% disapproved — 87% strongly disapproved. 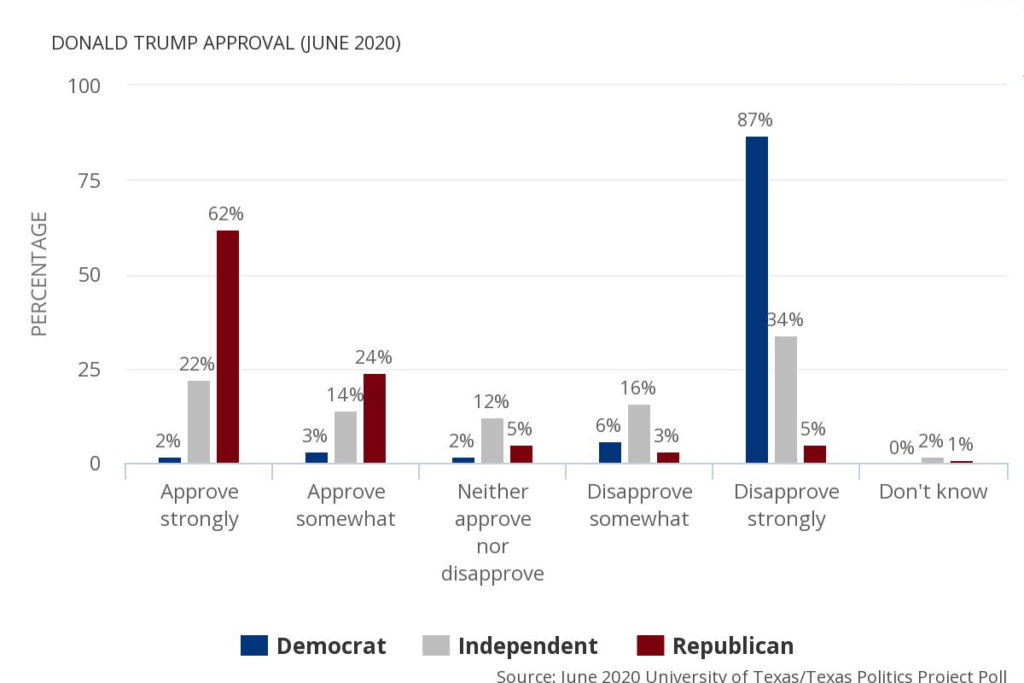 “Views of Donald Trump remain amazingly fixed and seemingly impervious to fundamental changes in the environment,” Henson said. “In the last few months, we’ve seen an economic crisis on par with the Great Depression, yet assessments of his handling of the economy have barely moved from where they were in polling we conducted a year ago.”

Texans’ assessments of the national economy, however, continue on a downward trajectory since the onset of the pandemic and the accompanying economic crisis: 17% of Texans said the national economy is better off than it was a year ago, a decrease of 31 percentage points since the February 2020 poll. In the same period, the share of respondents who said the economy was “a lot worse off” than a year ago increased from 8% to 41%.

In a sign that the COVID-19 pandemic was receding as a problem in Texans’ minds even as the state has become a global hot spot for the spread of the virus, the percentage of Texans who said that the coronavirus is the most important problem facing the country declined from 33% in April UT/Texas Tribune polling to only 18% in June polling (though still enough to top the list of most important problems). Political corruption/leadership was the second most selected problem (15%), followed by the economy (8%).

“The shift in the salience of the virus in the eyes of Texans was a sign of a complex set of attitudes toward the pandemic and the response of individuals and institutions to the worsening situation in Texas and much of the United States,” Blank said. Details from polling on these attitudes, as well as those toward race and policing, will be released Monday, July 6 on the Texas Politics Project website.

The June 2020 University of Texas/Texas Politics Project Poll is the 40th statewide poll in a series of polls conducted by a team of researchers from the Department of Government and the College of Liberal Arts at UT Austin. The poll surveyed a sample of 1,200 self-declared registered voters in Texas during June 19-28, 2020. Data was collected over the internet by YouGov. Results and extensive graphics are available at the Texas Politics Project website.

New Center at UT Austin Strives for Equity in Engineering