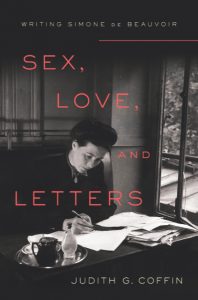 While working on an essay related to Simone de Beauvoir in the late 2000s, Judith Coffin came across a virtually unexplored archive of letters sent by readers to the famed French thinker. The archive would inspire Coffin’s book released a decade later, “Sex, Love, and Letters: Writing Simone de Beauvoir,” a monograph about letter writing, post-war France and readers’ complicated relationship with the prominent philosopher and feminist.

“I stumbled onto these letters, and they were just amazing,” Coffin says. “I had never really thought about letters as letters before — they’re so self-dramatizing, and they’re so direct, and you feel like you’re reading over somebody’s shoulder. So, I was completely entranced with them.”

Coffin, an associate professor of history at The University of Texas, is particularly interested in gender and also teaches about various topics related to European history. “Sex, Love, and Letters’’ is her second monograph, after “The Politics of Women’s Work: The Paris Garment Trades.” She also co-wrote five editions of W.W. Norton’s history textbook “Western Civilizations.”

Coffin describes Beauvoir as “probably the best known and most consequential feminist theorist of the 20th century,” a woman whose outsized life combined politics, philosophy, literature, travel and a much-watched partnership with another French existentialist, Jean-Paul Sartre. Her most famous work, “The Second Sex,” was a central text of 20th century social and cultural theory, Coffin says. According to Meryl Altman’s book, “Beauvoir in Time,” “The Second Sex” set out to “demystify and liquidate the notions of femininity that cause women to be treated as ‘Other’ by culture, by men, and by themselves.”

Still, Beauvoir wrote much more than “The Second Sex,” Coffin adds. She wrote other philosophical essays, fiction and four volumes of autobiography.

“She not only wrote this very, very big book of feminist theory, she wrote four really dense volumes of autobiography, and that changed a lot of people’s lives,” Coffin says. “That drew a lot of people from pretty much all over the world into her orbit.”

In “Sex, Love, and Letters,” Coffin discusses the relationship between the letter writers and Beauvoir. She points out what literary scholar Nancy K. Miller calls “interactive remembering” as a process taking place in some letters. While they read Beauvoir’s memoirs, readers saw themselves in her, and they started to re-imagine their own pasts (and futures) according to hers.

“All of the memories that you evoke, I had lived them; many of the feelings that you describe, I have felt them,” writes one Beauvoir fan.

Coffin’s book also touches on historical themes and events from the decades after World War II, including the Cold War, decolonization and the Algerian War, economic expansion and the baby boom, and second-wave feminism. Coffin says she decided to include what the letter writers thought was most important — what jumped out to them from Beauvoir’s books — and these were also a lot of the major issues for historians of post-war France.

“Letters were sort of my guide, but I was also guided by issues in not just French history, but European history and world history that we’re all interested in,” Coffin says. “The aftermath of World War II, how one deals with knowledge of the Holocaust, how you deal with memories of World War II, colonialism, race relations, very rapid social and cultural change, the emergence of psychoanalysis and Freud. All of those things, I thought the letters gave me new angles on.”

Coffin’s book required her to work through the letters, which was a laborious process. She returned to the national library of France during several summers to access the archive, which she couldn’t photograph and could only work with under supervision. She says she ventured through 22 storage containers’ worth of letters, written between 1949 and 1974, a few years after Beauvoir published her last memoir.

Two chapters of Coffin’s book focus on “The Second Sex,” but most letters from the time of its 1949 release were not preserved in the archive. Rather than letters, Coffin includes critical reviews of that book in her analysis. She says many of those reviews came from the Harry Ransom Center at UT, which she was alerted to by Ransom Center research associate Elizabeth Garver.

Many women and men who wrote to Beauvoir liked her work and considered her a model of the independent woman, but many others did not. And Coffin notes that while Beauvoir was engaged with her readers — and even wrote back to them — she was not always nice to them. For example, Beauvoir wrote a fictional book with a helpless heroine, meant to represent readers who did not understand her arguments.

But as Coffin writes in the introduction to “Sex, Love and Letters,” her question is not “whether we should admire or distrust Beauvoir. The archive provides ample reasons to do both.” Instead, Coffin focuses on why Beauvoir loomed so large in her readers’ lives, why they wrote to her and why the French philosopher was also passionately interested in her readers.

“There were many times writing this book where I thought, ‘Oh, she’s being really mean and condescending to her readers.’ But they didn’t care, and they loved her anyway,” Coffin says. “It didn’t matter. They thought what she was saying was important, and they could imagine themselves outside of her disapproval.”

OTHER WORKS: Notable publications by staff and faculty members

Underground, Monroe, and The Mamalogues: Three Plays
By Lisa B. Thompson
These plays deal with such themes as family, motherhood, migration, racial violence, and trauma and its effect on Black people from the early 20th century to the present. Thompson is a professor in the African & African Diaspora Studies Department.

The Turnout Myth: Voting Rates and Partisan Outcomes in American National Elections
By Daron Shaw and John Petrocik
Contrary to popular opinion, election turnout, the authors find, is determined by less-engaged citizens’ responses to short-term forces such as candidate appeal, issues and scandals. Co-author Shaw is a professor in the Department of Government.

Miró Rivera Architects: Building a New Arcadia
By Juan Miró and Miguel Rivera
Learn more about architecture and urbanism in Texas and beyond through the vivid illustrations and photography in this volume. Miró is a professor in the School of Architecture.

Flash of Light, Wall of Fire: Japanese Photographs Documenting the Atomic Bombings of Hiroshima and Nagasaki
By The Dolph Briscoe Center for American History
This book spotlights a recently acquired photo collection from the Anti-Nuclear Photographers Movement of Japan. Preface by Briscoe Center Executive Director Don Carleton; essay by Michael B. Stoff, an associate professor in the Department of History.