We asked incoming freshmen what questions they had about UT traditions. Here are their questions and our answers.

One more thing: The university gratefully acknowledges the many years of research by alumnus Jim Nicar to uncover, clarify and occasionally correct our understanding of the origins of many UT traditions. His website, the UT History Corner, was the source for much of the information below.

Why is our mascot a longhorn?

Good question, but to find out why, it might help to find out when the animal became our mascot. The football club at UT, first known as the Texas Varsity, was formed as an unofficial, student-run team in about 1893. In 1895, the team became an official university club with the creation of the Athletic Council and the hiring of a coach.

The earliest known reference to them as Longhorns in print was Nov. 18, 1900, in the Galveston Daily News: “Football Game at Austin — Texas to-day avenged former defeats, and the long horns clipped the Tigers’ claws by a score of 17 to 11 in one of the most exciting games played in this city.”

In 1903, Alex Weisburg, editor-in-chief of The Daily Texan, instructed reporters to refer to every UT sports team as “The Longhorns,” and they’d soon have a name. The strategy worked, and in 1906, the name became official.

So why longhorns? (By the way, an animal breed is a common noun, so it’s usually lowercase, like collie, or palomino; a team name is a proper noun, so it is capitalized.) The Texas longhorn had been a familiar and imposing character of the Texas landscape since herds began to escape the Spanish and become feral in the 1500s. They are famously tough, surviving in conditions most other breeds cannot. Then, of course, there is their namesake feature. Their horns, which grow on males and females alike, can span 9 feet! With the cattle drives of the Old West still fresh in the public’s memory at the turn of the 20th century, nothing said “Texas” to citizens then more than Texas longhorn cattle, and conveniently, “Texas” was right there in the breed’s name. In 1995, the Texas Legislature even named the Texas longhorn the state large mammal. (The state small mammal is the armadillo.)

Why orange and white?

In 1885, UT was less than 2 years old but it already had a baseball team. The team was scheduled to play at Southwestern University in Georgetown. Students around the country didn’t dress in their school colors to games back then. Instead, they wore their Sunday best and used lapel ribbons to show team spirit. UT students had boarded a chartered train at the station downtown for the ride to Williamson County when two of them, Venable Proctor and Clarence Miller, realized no one had ribbons on. They jumped out of the train, sprinted up Congress Avenue and ducked into a general store. There, gasping for air, they asked the shopkeeper for three bolts of two colors. “What colors?” he asked. “Anything,” came the desperate answer. The train was leaving the station, literally.

The clerk grabbed the two colors he had the most of: bright orange, because it hadn’t sold much, and white, of which he kept a lot on hand for weddings. They caught the train and parceled out the ribbons on their way north. Thus were orange and white first paired in the rooting on of UT players. But the matter was hardly settled.

In the 1890s, the football team’s first uniforms were gold and white, which was a reference to the yellow brick and cream limestone of campus buildings then. By 1899, fans were wearing all shades of oranges and yellows, crimson, maroon and even blue. It was time to put an end to the chaos, so the regents invited all students, faculty, staff and alumni to cast a vote. Of the 1,111 ballots cast, the combination of orange and white won. Second place was orange and — wait for it — maroon. The regents made it official in 1900. 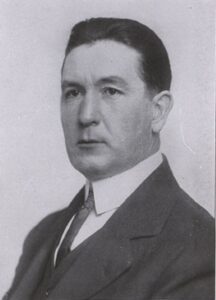 Where did the burnt orange color come from?

The Sept. 19, 1925, edition of The Daily Texan heralded the change to burnt orange in a short article on Page 7:

“When crowds watch the Longhorns fight their way through one of the stiffest schedules of their career, the men will wear uniforms of a color slightly different from the proverbial orange and white, according to S. N. Eckdahl of the University athletic staff, who has been issuing equipment to the Longhorn players.

“As several other schools in the country claimed orange and white as their school colors, the University officials decided to adopt an orange and white which should be Texas’ own. As a consequence, a combination of dyes was used to produce a shade different from the standard orange. The new shade is darker, being more of a burnt orange.”

So it was Coach E.J. “Doc” Stewart who introduced burnt orange. Burnt orange — or Texas orange — was used from 1925 until World War II, when the dye was no longer available. Team uniforms reverted to their original bright orange color for almost two decades until Coach Darrell Royal returned to “Texas orange” in the early 1960s. For the record, the precise, technical name now is “focal orange.”

Was our first mascot really a dog?

UT never really chose a dog for a mascot. The dog chose UT, even though the teams were already called Longhorns. And to confuse matters even more, the dog’s name was Pig.

UT’s first athletics director, Theo Bellmont, moved from Houston for the job in 1914 bringing with him a 7-week-old pit bull terrier. A simpler time, the puppy was allowed to roam the campus, and as you might imagine, was instantly adored. One day the dog was standing on the football sideline next to the team’s center, Gus “Pig” Dittmar, so nicknamed for slipping through the defensive line “like a greased pig.” When students noticed that the dog and the center both were bowlegged, the dog had a namesake.

But the love affair between Pig and the Forty Acres ended when his life was cut short by a Model T on Guadalupe Street. The canine was laid in a coffin and somberly paraded down the Drag before being eulogized by the dean of engineering and buried on campus in a spot just north of what is now the Graduate School of Business. A sign posted on his grave read: “Pig’s dead. Dog gone.”

Who was the first Bevo, and why is that his name?

By 1916, UT teams had been called Longhorns for 16 years but had never had a live mascot, except for the dog named Pig. Stephen Pinckney, a law school grad, wanted to change that.

That year he was working for the U.S. attorney general’s office and had spent most of the year in West Texas helping with raids on cattle rustlers. In September, a raid near Laredo revealed a steer whose hide was so orange Pinckney knew he’d found his mascot.

With $1 contributions from 124 fellow alumni, Pinckney purchased the animal and loaded it onto a boxcar. The steer arrived at the Austin train station just in time for the football game against A&M. At halftime, in front of a record 15,000 fans in the wooden bleachers of Clark Field, where the Gates-Dell Complex and the Peter O’Donnell Building now stand, two West Texas cowboys dragged the half-starved and frightened longhorn onto the field, where it was formally presented to the UT student body by a group of Texas Exes.

The following month, while writing an account of the game, the editor of UT’s alumni magazine, The Alcalde, proclaimed: “His name is Bevo. Long may he reign!”

But the editor left no clues about why his name was Bevo. In the century since, several theories have surfaced. The most likely is that it stems from the word “beeve,” which was a common term for a beef-producing animal, to which an “o” was then added, a popular way to create nicknames at that time. (The story involving Aggies, a football score, and branding has been debunked.)

Shortly afterward, when rumors began circulating that the Aggies planned to kidnap Bevo, the longhorn was removed to a ranch 60 miles west of Austin. Within two months, the United States entered World War I and all else became a low priority.

The steer was all but forgotten until the end of the war in November 1919. Since food and care was costing UT 50 cents a day, and because Bevo wasn’t tame enough to be in the football stadium, let alone roam the campus, he was fattened up and became the main course for the 1920 football banquet. It was a less sentimental time.

What is the origin of the “Hook ’em Horns” hand sign?

In 1955, UT’s head cheerleader, Harley Clark, and his roommate, H.K. Pitts, were making shadow puppets by the light of a lamp on their dorm room wall when they discovered that a hand with the index finger and pinkie held out made a pretty good longhorn head. Clark introduced the sign at a pep rally that week, and it was an immediate hit. Unbeknownst to the innocent Texas college kids, the sign had long been considered vulgar in other parts of the world, such as Europe, and the dean of students was none too pleased by the new tradition. But it was too late. There was no stopping an idea whose time had come. 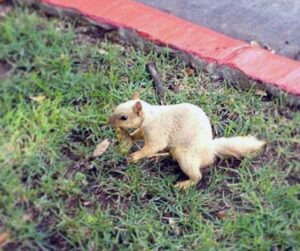 Is it true that albino squirrels bring good luck? Do they help pass classes?

No, it is not true that albino squirrels bring good luck. But the cream-colored squirrels that are seen on campus are not albinos, which would be pure white and have pink eyes. Rather, they are simply a blond variation of the fox squirrels we see everywhere. And seeing a blond squirrel on the way to an exam definitely makes one more likely to pass it.

Domino is a living tradition. He is a feral “tuxedo” cat that has lived on the West Mall in front of the Flawn Academic Center for some 10 years. He is not the only cat that calls the Forty Acres home; there are about 40, appropriately enough (mice beware). But he’s definitely the most famous, and he knows it.