Melanie Saenzpardo, a freshman biomedical engineering major, was accepted by several top colleges, including Yale, Columbia, Brown, Duke and Johns Hopkins, but this fall she started classes at The University of Texas at Austin. She chose UT over her other offers because she felt that it was the place where she would be most supported to succeed.

“UT really showed me how invested they were in my talents. They cared about me deeply,” says the El Paso resident. “I realized that they had a collaborative environment and that I could not only learn from the professors but as well as my classmates and through research. Knowing that they believe in my talents makes me feel like I can accomplish everything I want.”

In 2020, UT Austin was nationally recognized for being a university where Latino students thrive. It was one of five colleges and universities to receive the prestigious Seal of Excelencia. The designation is given by Excelencia in Education, a national organization committed to the advancement of Latino student success in higher education. 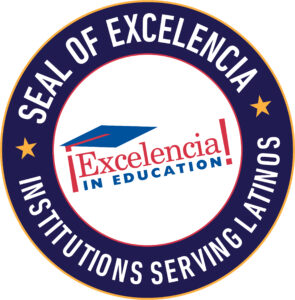 “Hispanic students come to UT from across the state and from all walks of life. Their experiences make our community stronger and benefit the workforce of tomorrow in Texas. The Seal of Excelencia is significant because it is an acknowledgment that UT is delivering on its commitment to supporting the success of Hispanic students,” says Luis Zayas, dean of the Steve Hicks School of Social Work and co-chair of the Hispanic Serving Institution Transition Committee. “I’m proud of our progress so far, but there is so much more we can do. President (Jay) Hartzell and many others are focused on the success of Latino students, and their success will help us make UT the highest impact public research university in the country.”

Since the Seal of Excelencia was introduced in 2019, only 14 colleges and universities have received it. UT Austin and the University of Arizona, which received the seal in 2019, are the only members of the Association of American Universities — representing the nation’s premier research universities — to do so.

“We’re looking for institutions that want to transform to become places where Latino students thrive, and not to the exclusion of others,” says Deborah Santiago, Excelencia in Education co-founder and CEO.

UT Austin has come a long way since it graduated its first Latino student, Manuel Marius Garcia, in 1894. Santiago recognizes the university’s willingness to evolve — from its Diversity and Inclusion Action Plan to calls for representation from the Hispanic Faculty/Staff Association. She also emphasized the importance of mentoring relationships as a factor in student retention rates.

Community support was key to success at UT Austin, according to Beatrice Torres ’21 a first-generation college student from Mission in the Rio Grande Valley. “By attending UT, I have the tools to carve out my path and do it confidently,” she said about graduating.

While at UT Austin, Torres, a neuroscience major, participated in undergraduate research opportunities, including Project SEED, where she studied the health and developmental effects on Latino children who are language brokers or translators for their parents. She was also a part the Project JUNTOS, a lab in the Department of Human Development and Family Sciences that offers students and faculty opportunities to research ways to serve the well-being of Latino/Hispanic students.

Now a UT alumna, she plans to continue studying public health and apply to medical school. Her goal is to return to her hometown and address the South Texas health disparities that motivated her to attend a world-changing institution like UT Austin in the first place. “It’s a way to reconnect and give back to the community that made me who I am.”

For UT President Jay Hartzell, the certification exemplifies the university’s commitment to the Hispanic community. “I’m delighted that UT has received the Seal of Excelencia. It fills me with pride that our efforts to foster a diverse and welcoming community are being recognized,” he says.

“Our goal is to becoming the world’s most impactful public university and part of that means empowering and enabling the next generation of Hispanic graduates, who are poised to play an even greater role in the public and professional life of our great state.”

According to the U.S. Census Bureau, Latinos are the nation’s largest ethnic minority group, and they make up nearly 40% of the population in Texas and 53% of students in Texas public schools. Last fall, when Latino student enrollment topped 25% at UT Austin, the U.S. Department of Education recognized it as a Hispanic Serving Institution.

As of September 2021, Hispanic undergraduates made up 27.1% of UT’s enrollment.

In his 2021 State of the University address, Hartzell noted UT’s successes. “We continue to make progress in cultivating a diverse and inclusive community. Take our student body: 20 years ago, just over 3% of our undergraduate students were Black. Fewer than 12% were Hispanic. Today, those percentages have doubled,” he said. “Obviously, we’re not done yet. But our size and scale mean that even small, proportional increases have large and powerful effects.”

Sarita Brown, UT alumna and co-founder and president of Excelencia in Education, says: “You can do these things, but you don’t do them overnight. And it takes many people being purposeful about what they do. … That’s what UT taught me.”

After receiving her undergraduate and master’s degrees from UT, Brown worked on minority recruitment and advancement through the Office of Graduate Studies. She says that when she left the university in 1993, it had the highest graduation rate of Latino Ph.D.s and a graduation rate for Black Ph.D. students in the top 20.

Regarding her work advocating for educational opportunities for Latinos, Santiago says she wants to use her privilege to “give back, keep the door open and help others get there.”

One of Excelencia in Education’s goals is to see 6.2 million Latino students receive college degrees by 2030. As a flagship university, UT Austin is positioned to lead the way and influence other colleges and universities. The Seal of Excelencia certification is a “reinforcing of a journey that needs to continue,” Santiago says. “It creates additional opportunities to do more.”